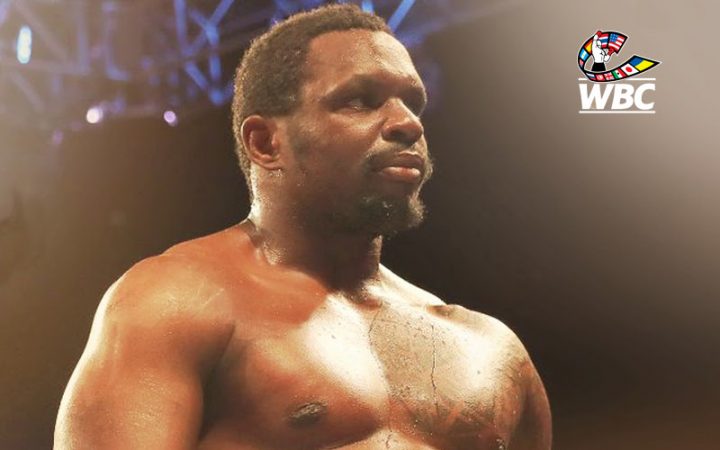 By Matt Lieberman: Interim WBC heavyweight champion Dillian Whyte has been given a provisional suspension by the World Boxing Council stemming from his positive test results before his last fight against Oscar Rivas on July 20. As such, Whyte’s status as the mandatory challenger to WBC heavyweight champion Deontay Wilder is frozen until the outcome of his B-sample test.

Whyte’s A-sample showed an adverse result from his recent test by UKAD, according to the WBC.  The WBC is now conducting an investigation over Whyte’s drug testing results for the Rivas fight. In the meantime Whyte is provisionally suspended by the World Boxing Council until the test results from his B-sample come back. What this means is Whyte will not be given mandatory status to challenge Wilder until he’s cleared by the UKAD and the WBC.

Here’s the full statement from the WBC on Whyte’s provisional suspension:

“An “A” Sample UKAD collected from Mr. Dillian Whyte in relation with his bout against Oscar Rivas yielded an adverse finding. In light of that adverse finding, and pending the outcome of the WBC’s own investigation and adjudicatory process, the WBC is provisionally suspending the WBC’s recognition of Dillian Whyte as WBC Interim World Heavyweight Champion and Mandatory Challenger of the division.

The WBC has notified Mr. Whyte and his team of the WBC’s suspension, and that it will afford Mr. Whyte the opportunity to present its position to the WBC at an investigative hearing which will take place at a place and time to be announced in the near future.

Throughout its investigation and hearing, the WBC will afford Mr. Whyte and his team the opportunity to present any available information and materials, and any exculpatory evidence they might deem appropriate.”

Whyte’s situation will be made clearer once the results from his B-sample come back.

The WBC chose to make a statement on Whyte’s adverse findings with his A-sample, but they failed to mention the issue with his gloves. Whyte reportedly wore a separate pair of gloves for the fight with Rivas rather than the ones that had been previously approved by Oscar’s team. The WBC didn’t say anything about that.

If Misses out on being made the mandatory for Wilder, it could take him a long time to work his way back to a mandatory status. Wilder likely won’t won’t give Whyte a title shot using one of his voluntary defenses. If Whyte is suspended for a year or two, then it’s going to make it doubly hard for him to get a shot at Wilder. Given that this would be Whyte’s second drug violation, his suspension could be a long duration.