Tyson Fury vs. Charles Martin could happen next says Arum 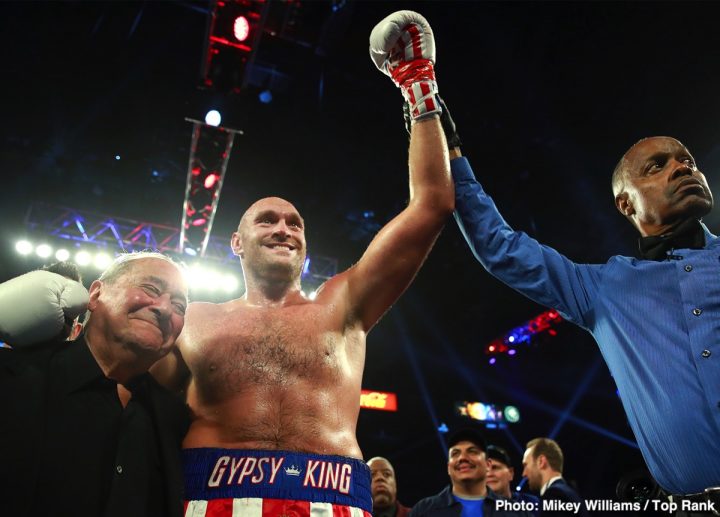 The Top Rank promoter Arum says he’s planning on getting the Fury vs. Martin fight done by Wednesday of this week.

Arum told Barbershop Conversations that there’s “a real possibility” that he’ll make the Fury vs. Martin  fight for the Gypsy King’s next match. There had been talk on social media last week that Top Rank wanted to fight an American heavyweight for his next fight, because his last opponent Tom Schwarz didn’t attract a lot of attention from the U.S boxing public last June.

Despite all the work that went into the promotion of the Fury vs. Schwarz fight, it failed to bring in the huge numbers that some had thought it would.

There were several things working against the Fury-Schwarz fight being a huge success:

Charles Martin not a great choice or Fury

Arum might be making the wrong choice in selecting the 6’5″ southpaw Martin as the next opponent for Fury to fight in the United States, because he’s not a well known fighter in the country. Although Martin is from the U.S, he doesn’t have a huge fan base in the country. Only the hardcore boxing fans in the States have heard of Martin, and many of them don’t think highly of him after watching him lose recently to Adam Kownacki and Anthony Joshua.

Kownacki beat Martin by a 10 round unanimous decision last September in New York in a close fight. Martin gave a good acount of himself, but he still wound up losing to Kownwacki. Joshua stopped Martin in the second round in 2016 to take his IBF heavyweight title from him in London, England, and many boxing fans think Charles quit in that fight.

Arum going in the wrong direction to build Fury’s popularity with U.S fans

Top Rank wants to build Fury into a big star in the United States before they match him up against Deontay Wilder in early 2020, but they’re not going to be able to achieve that goal by matching him against fighters like Charles Martin and Schwarz. The guys that can help Fury’s popularity are fighters that could potentially beat him like Michael Hunter, Filip Hrgovic, Joseph Parker, Alexander Povetkin, Kownacki and Kubrat Pulev.


« Spence vs Porter: Errol Spence ready to take the next step