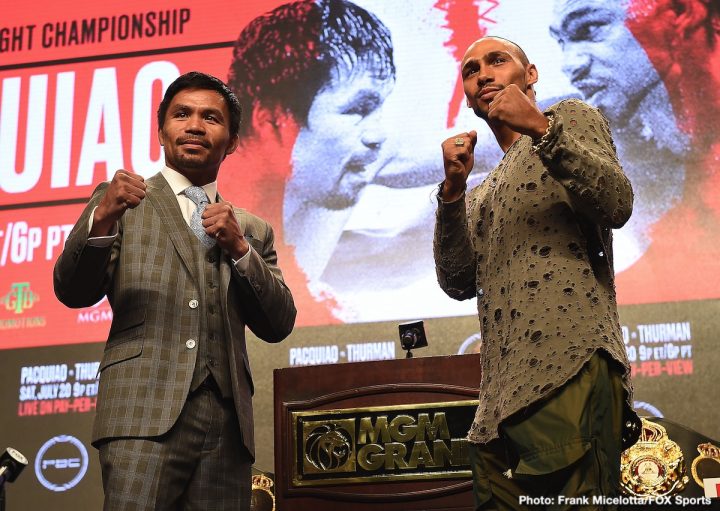 By Chris Williams: Keith Thurman let Manny Pacquiao know who’s boss during the final press conference by ordering him to face off when the two were standing on stage, posing for pictures in front of the media. Pacquiao initially looked like he didn’t want to face off with him. Thurman angrily ordered the former eight division world champion Pacquiao (61-7-2, 39 KOs) to stand and face off with him.

Thurman said, “Let’s face off,” and Pacquiao immediately followed his instructions, as if were his underling.  Pacquiao looked meek during this interaction. Afterwards, Pacquiao patted Thurman on the shoulder, as if to say, ‘Let’s be friends.’ Thurman didn’t look like he wasn’t interested in playing nice though. Pacquiao should have walked off without the placating gesture.

We have to hope for Pacquiao’s sake that he brings it on Saturday night.

Thurman (29-0, 21 KOs) and Pacquiao will be fighting this Saturday night on Fox Sports pay-per-view from the MGM Grand in Las Vegas, Nevada.

“I want to trade with Pacquiao,” said Thurman. “As Ben Getting used to say, ‘If you hit them with eight ounce gloves, they going to do a pretty little dance.’ Manny Pacquiao is no different. Keith ‘One Time’ Thurman belongs at the top of the welterweight division yesterday, today and forever. There may be some backlash if it [a win over Pacquiao] doesn’t happen in fabulous form. You want to make history, you destroy Manny Pacquiao. You want to get positive talk, you clearly beat Manny Pacquiao. Maybe I out-box Manny Pacquiao, and they say, ‘Keith Thurman is not a devastating puncher in today’s generation of welterweights, but his boxing is among some of the finest. Obviously, he’s hard to beat, and he clearly out-points and out-classes Manny Pacquiao.'” said Thurman.

A brutal knockout win for Thurman will give his career a huge boost, but he’ll still get credit just by beating Pacquiao. Getting the victory is all that matters. If Thurman wins by a narrow decision, his career will still take off into the stratosphere. Pacquiao is a legend, which means it doesn’t matter how Thurman beats him. As long as Thurman can add Manny’s name to his resume in the win column, that’s all that matters.

“We want a ‘W.’ We don’t care,” said Thurman. “We want that ‘W.’ But deep down, I want to do this right like I did with Diego Chaves…The world wants to see that Keith Thurman is more than just a one-dimensional fighter. Lately, we haven’t seen knockouts. We did see the knockdown [against Josesito Lopez]. You saw a flash real quick. You saw a left hook in the second round against Josesito Lopez. Like I said, we’re going to show you a little bit of this, and a little bit of that. But we’re going to start off with more than a tap, tap, tap,” said Thurman.

Thurman gave Josesito Lopez just a small taste of his punching power last January in dropping him in the second round with a left hook. That was just a flash, says Thurman. But he wants to do a lot more against Pacquiao on Saturday night when the two of them throw down on Fox Sports pay-per-view. Thurman, 30, was coming off of a 22-month layoff at the time that he fought Josesito last January, so you can’t blame him for not knocking him out.

For a fighter that had been out of the ring for close to two years, Thurman looked spectacular against Lopez. There aren’t too many guys in the welterweight division that would be able to perform as well as Thurman did off of a 2-year layoff, are there?

Thurman gives warning to Pacquiao: If you knock me down, you better knock me out

“We all know that Manny Pacquiao is a lightweight fighter,” said Thurman. “So lightweight fighters, not only do they have a higher punch output on average, but they come into the ring with tremendous hand speed. The advantage is, he does have short arms. So if he wants to hit me, he has to be in a zone where I can hit him. To make up for those short arms, he’s utilized a tactic throughout his career that’s also very fast, that he has an in and out movement. He’s fast. Not only does Manny Pacquiao have fast hand work, he has fast footwork. Ultimately, it can be a problem. He might slip in a few good punches on me. If he gets me down, he better have me out, because I’m coming. I want to trade with Pacquiao,” said Thurman.

Thurman says that Pacquiao’s short “T-Rex arms” are going to make it necessary for him to get in close. ‘One Time’ isn’t worried about Pacquiao’s power, because he sees him as a lightweight and not a true welterweight. Thurman is unafraid of Manny’s punching power, and he’s ready to go toe-to-toe with him in this fight.

Pacquiao, 40, is going to need to trade with Thurman on Saturday night, because ‘One Time’ is going to insist on it. He says Pacquiao is a “lightweight”, and he wants to “trade with” with him. Pacquiao won’t be able to land his shorter punches without getting inside Thurman’s wheelhouse on Saturday. That’s where it’s going to get interesting, because if Manny can’t handle Thurman’s powerful left hook, he’s not going to last the full 12 round distance. That’s precisely what Thurman is saying. Pacquiao can’t handle his power, and he’ll be taken out before the 12th round.

Thurman: Pacquiao won’t do anything with his “T-Rex arms”

“Manny isn’t going to do anything. With the little ‘T-Rex’ arms.” said Thurman.  “He’s about to get beat up. I get to punch a Senator in the face and he’s going to feel it. If he’s upset about it, he can do something about it Saturday night. It’s called swing, swing, swing baby.”

Thurman isn’t letting up on Manny in taking about his short arms, and he can’t wait to get him in the ring. 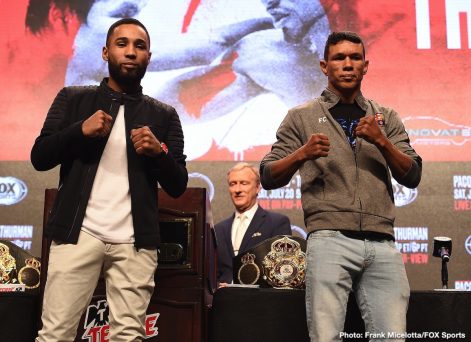 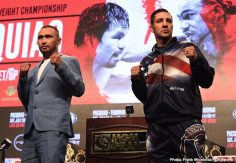 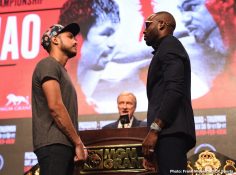 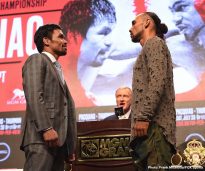 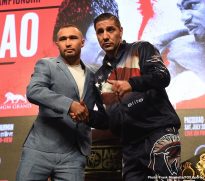 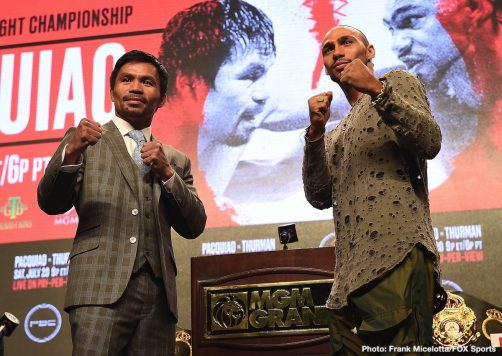 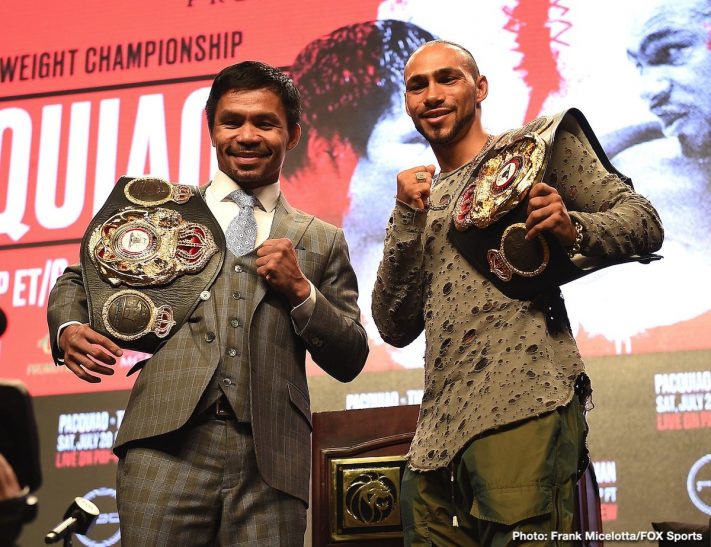