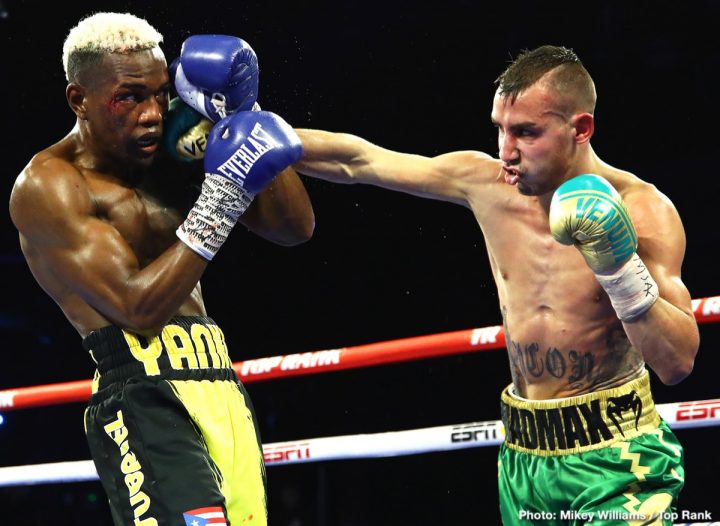 By Mark Eisner: Upon learning of his opponent Maxim Dadashev’s death earlier this week, Puerto Rican boxer Subriel Matias was deeply saddened about the news. Matias (14-0, 14 KOs) is “devastated” about the tragedy, according to NBC4 Washington. The two fighters fought last Friday in an IBF light welterweight title eliminator on ESPN at the MGM National Harbor in Oxon Hill, Maryland.

“I don’t want this check. Those were his first words,” Matias’ spokesman Fernando Gaztambide told NBC4 about his not wanting his winnings for the contest against Dadashev. Matias’ check for the fight was $75,000.

After the Dadashev-Matias fight was over last Friday, Dadashev reportedly needed help walking after leaving the ring. His condition worsened, and he was carried to a stretcher. Dadashev was vomiting and he was taken to a hospital for emergency brain surgery. It was too late. Dadashev passed away days later. The Maryland State Athletic Commission will be investigating the fight, and how things were done.

“No one is prepared to die while looking for dreams and goals,” said Matias to NBC4 about Dadashev’s death. “We simply go up to the ring thinking about the well-being for our family without knowing how complicated and difficult it is to get into the ring. Fly high great warrior. Only God knows the reason of things. You will always have my respects. RIP Maxim Dadashev.”

There are many boxing fans that were openly critical about the fight being allowed to go as long as it did, given how one-sided it had become by the middle rounds. Matias is a huge puncher, and Dadashev couldn’t keep him off of him.

As the fight progressed, it became increasingly more one-sided with the harder hitting Matias landing tremendous shots to the head and body of the 28-year-old previously unbeaten Dadashev (13-1, 11 Os). The Russian fighter didn’t possess the power to hold off Matias, and he couldn’t elude him by using movement.

Matias was quick to cut off all avenues of escape for Dadeshev, which forced him to stand and trade. Without the power to compete effectively, Matias took a lot of punishment. Dadashev’s trainer Buddy McGirt, sensing that his fighter had taken too much punishment, alerted the referee before the start of round 11 that he wanted the fight to be stopped. The contest didn’t get out of hand until the later rounds. Dadashev landed a lot of shots in the early rounds, but Matias took over by the eighth, and he started to wear the Russian fighter down.

McGirt: I saw Dadashev was fading

“He seemed OK, he was ready, but it’s the sport that we’re in. It just takes one punch, man,” said McGirt to ESPN.com about Dadashev. “I saw him fading and when he came back to the corner (after the 11th round), my mind was already made up. I was just asking him out of respect, but my mind was made up. I wasn’t going to let him go out there.”


« Roy Jones Jr. ‘Porter fight will show what Spence has got’

Jessie Magdaleno vs. Rafael Rivera on August 17 on ESPN »