Roy Jones Jr. ‘Porter fight will show what Spence has got’ 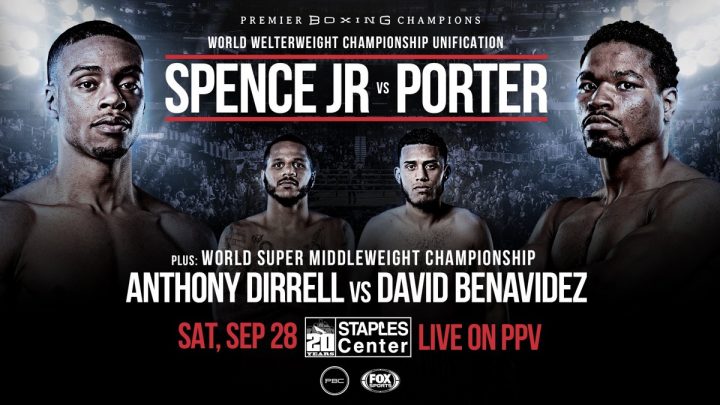 By Jeff Aranow: Roy Jones Jr. says the Shawn Porter will show Errol Spence Jr. has got in the talent department when the two face each other other on September 28 on Fox Sports Pay-Per-View.  Roy says Porter is the welterweight division’s version of Evander Holyfield. Jones Jr. is giving Porter a lot of credit in comparing him to Holyfield.

Jones Jr. says he can’t judge the unbeaten Spence Jr. (25-0, 21 KOs) based on his victory over former IBF welterweight champion Kell Brook two years ago in 2017, because the British fighter was coming off of a fifth round stoppage loss to Gennady Golovkin, and a broken orbital bone.

Spence will be meeting WBC welterweight champion Porter (30-2-1, 17 KOs)  at the Staples Center in Los Angeles, California. In the co-feature bout, WBC super middleweight champion Anthony Dirrell will be defending against David Benavidez.

“This will answer a lot of questions,” said Jones Jr. to Fighthub in talking about the Spence vs. Porter fight. “This will be the first real fight I’ve seen Porter in. He beat guys that had names like [Danny] Garcia, who was coming up. The guy from England [Kell Brook] that got his orbital bone broken by GGG, I’m not going to really judge him by that either. I’ve got to see him against a guy there’s nothing wrong with,” said Jones.

This fight might not answer too many questions about Spence, because Porter is a pretty limited fighter, as we saw in his last fight against Yordenis Ugas. Porter should have lost that fight soundly in the eyes of a lot of boxing fans. Shawn was given a controversial 12 round split decision over Ugas, but a good portion of the fans saw that as another loss for Porter.

Jones Jr. says Porter is the Evander Holyfield of the 147 pound division

Porter is a much different fighter than Holyfield. Although Holyfield often clashed heads with his opponents, he didn’t try and win by roughing up his opponents. When he was in his prime, Holyfield would look to beat his opponents by taking the fight to them, and beating them with his combination punching, and heavy pressure. Holyfield would have had a lot better career had he stayed at cruiserweight, but he moved up to heavyweight to chase bigger paydays. Porter is more of a roughhouse fighter, who looks to win by taking the fight to the trenches, and battering down his opponents with his physical style of fighting. When Porter deviates from that style, he struggles, as we saw in his fights with Granados and Ugas. Porter might be more Iran Barkley than Holyfield.