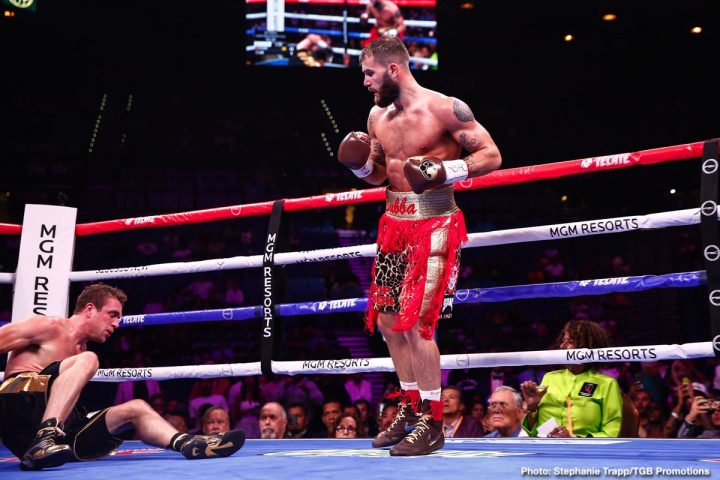 “It went exactly how I planned it would go,” said Plant. “Absolutely. I’ve been telling you all week it wasn’t going to go 12 rounds and I stuck to my word and I tried to do that. I hope you guys had a good time.”

Plant got off to a fast-start, dropping Lee with a left hook late in the first round. The unbeaten challenger was able to recover and survive the round, but was hard-pressed to make up for the hand speed advantage of Plant.

“I think I have a high boxing IQ and I do this at a really high level,” said Plant. “So it was just about making adjustments. He’s a big, strong guy and he just came in here to give it his all.”

Lee looked to charge in hard against Plant and use his size and power to land a big shot and change the momentum of the fight. Plant was sharp and avoided the looping right hands that Lee was attacking with.

“The speed was the difference, he’s fast and very accurate,” said Lee. “I had some success with my right hands but wasn’t able to be consistent with it.”

In round three, Plant landed a vicious right hook early in the round that put Lee down for the second time. After a left hook appeared to connect and send Lee down a second time, referee Robert Byrd ruled it had come from a push and continued the fight once Lee got to his feet.

Plant had his opponent hurt and continued to press forward, eventually landing another left hook that put Lee down, this time forcing the referee to wave off the bout 1:29 into the round.

“I had no issue with the stoppage, that’s the referee’s job and I respect it,” said Lee.

After the fight, Benavidez was asked about a possible unification fight against the winner of the just announced Anthony Dirrell vs. David Benavidez WBC Super Middleweight Championship fight.

“Oh yeah, we can definitely unify,” said Plant. “I ain’t hard to get a hold of. I ain’t hard to make a fight with. Come see me. You know my advisor.”

The opening bout on FOX and FOX Deportes saw Efe Ajagba (11-0, 9 KOs) score a unanimous decision over Ali Eren Demirezen (11-1, 10 KOs) in a 10-round battle of undefeated heavyweights. It was the first time that two unbeaten fighters from the 2016 Olympics faced off as pros.

Ajagba used his jab and height effectively throughout the fight, landing 10 of 45 jabs per round, doubling the heavyweight average. However, an elbow injury and the accurate punching of Demirezen forced Ajagba to go the distance for the first time as a pro.

“This was the first fighter to take me the distance,” said Ajagba. “He was strong and could take my punches. My trainer just told me to keep using my jab and stay in the middle of the ring.

“I hurt my elbow early on, so I couldn’t shoot my right hand like I wanted. But I won’t use that as an excuse. As a tall man I had to use the jab and if it went the distance, that was my best way to win.”

Demirezen thought the scorecards should have been closer and believed that his performance should have garnered him more than the decision loss. Demirezen was actually the more accurate puncher, landing 26% of his punches to 22% from Ajagba.

“I don’t agree with the scores, especially 99-91” said Demirezen. “It was much closer. I feel that at minimum, it was a draw. I knew I had to knock him out and that a knockout might be easier than winning by points. I thought it was a good performance but I can do better. I’d like to fight in the U.S. again.”

Ajagba’s activity from start to finish was impressive, as he threw 877 total punches, landing 191. While Demirezen was not far behind with 149 punches landed, he only out landed Ajagba in three rounds.