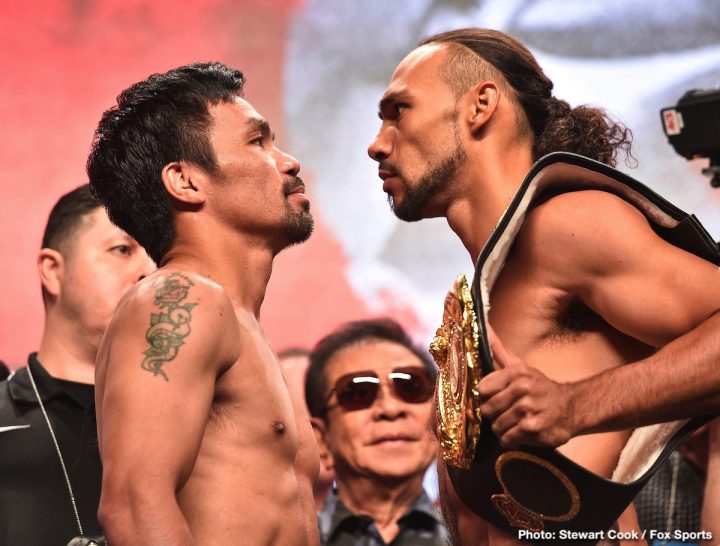 By Allan Fox: Manny Pacquiao weighed in at 146.5 pounds for his fight against Keith ‘One Time’ Thurman this Saturday night on Fox Sports Pay-Per-View at the MGM Grand Garden in Las Vegas, Nevada. Thurman, 30, appeared to be trying to stare holes through Pacquiao during the face off. Keith had an intense stare that made him look a little unhinged.

What contributed to Thurman’s strange look was how emaciated he was from water loss. Thurman looked crazy-eyed. Whether that was intentional on Thurman’s part or the effects of having lost huge amounts of water weight is unknown.

Physically, Thurman looked unwell. He clearly has lost a huge amount of water weight to make the 147 pound limit, and you have to wonder how that’s going to effect him on Saturday night. It doesn’t matter that Thurman will have put the weight back on by then.

When a fighter dehydrates as bad as Thurman has, it’s bound to impact their performances inside the ring during the fight. This is how Thurman looked at the weigh-in for his previous fight against Josesito Lopez last January, and he put in a poor performance in that fight. It’s getting harder for Thurman to make the 147 pound limit as he gets older, and that might be the reason why he struggled in his last fight.

Pacquiao, 40, looked in great shape as usual, and appeared almost as his full fighting weight.

In contrast, WBA Super World welterweight champion Thurman (29-0, 21 KOs) looked badly dehydrated in coming in at 146.5 lbs. Judging by the look of Thurman, there’s a good chance that he’ll pack on between 15 to 20 pounds of water weight overnight to come into the ring around 163 to 166 pounds on Saturday night. Thurman looked like a ful-fledged middleweight just two weeks ago, and that’s not even his division.

“With my experience in boxing, I want to teach him like a professor,” said Pacquiao about Thurman.

There’s a massive gulf between the two fighters in terms of experience. Pacquiao has won world titles in eight divisions, and been involved in a large number of huge fights. For Thurman’s part, he only has his two fights against Danny Garcia and Shawn Porter going for him in terms of big fight experience. The rest of Thurman’s fights have come against beatable guys like Luis Collazo, Josesito Lopez, Julio Diaz, Robert Guerrero, Leonard Bundu, Diego Chaves and Jesus Soto Karass.

“Definitely, the winner out of all three of the fights,” said Danny Garcia to secondsout about wanting to fight the Pacquiao vs. Thurman, Errol Spence Jr. vs. Shawn Porter winner or Mikey Garcia.

Garcia likely won’t be the next opponent for the Pacquiao vs. Thurman fight, but that’ll depend who wins. If Thurman wins, he’d likely pull the trigger on a fight against Garcia rather than face the winner of the Errol Spence Jr. vs. Shawn Porter fight.

“I’d take the winner out of this [Pacquiao vs. Thurman],” said Angel Garcia, the father of Danny Garcia, talking to secondsout.

Manny isn’t used to making predictions about his fights. He normally leaves that up to his trainer Freddie Roach, the bettors and the boxing public. This fight is special for Pacquiao, because Thurman has done a massive amount of trash talking that’s gotten under his skin. Pacquiao wants to go out and punish the 30-year-old Thurman for all the negative things that he’s said about him during the lead up to the fight. Thurman has crossed the line many times by saying he wants to “crucify” Pacquiao, and saying he’s got short “T-Rex arms.”

Other weights on Saturday’s Pacquiao-Thurman card:

Ugas (24-4, 11 KOs) weighed in at 147 pounds for his WBC welterweight title eliminator bout against former WBC lightweight champion Figueroa Jr. (28-0-1, 19 KOs). The Ugas-Figuera Jr. fight is scheduled for 12 rounds. The winner will be the WBC mandatory to champion Shawn Porter. Figueroa Jr., 29, weighed in at 147 pounds as well. Ugas, 33, should arguably already be the WBC welterweight champion due to his controversial 12 round split decision loss to WBC champion Shawn Porter last March. Ugas fought well enough to rate the victory, but two of the judges had Porter winning.

Former IBF light welterweight champion Lipinets (15-1, 11 KOs) weighed in at 147 pounds for his 10 round fight against replacement opponent Jayar Insom (18-2, 12 KOs). Lipinets, 30, was supposed to be fighting John Molina Jr., but he pulled out of the fight on Thursday due to a back injury. Insom, 28, was brought in as the replacement opponent to fight Lipinets.

Former WBC bantamweight champion Luis Nery (29-0, 23 KOs) weighed in a half pound over the limit at 118.5 pounds for his fight for the WBC silver bantamweight title against former WBA 118 pound champion Juan Carlos Payano (21-2, 9 KOs). Nery, 24, has one hour to lose the half pound to get down to 118 lbs. This isn’t the first time that Nery has come in over the limit for one of his fights. For his part, Payano, 35, weighed in at 117.5 pounds. Payano was recently knocked out in the first round by Naoya Inoue last October. Payano rebounded from that loss to defeat Damien Vazquez by an eight round unanimous decision last March.

IBF super middleweight champion Caleb Plant (18-0, 10 KOs) weighed in at the limit at 168 pounds for his title defense against #15 IBF Mike Lee (21-0, 10 KOs), who is coming down in weight from the light heavyweight division to challenge for the title. Lee weighed in at 167 lbs.

Undefeated heavyweight Efe Ajagba 10-0, 9 KOs) weighed in at 242 pounds for his 10 round fight against unbeaten Ali Eren Demirezen (11-0, 10 KOs). for his part, Eren Demirezen weighed in at 247.5 pounds.  Ajagba is a big puncher with knockout power in both hands. This fight likely won’t go the distance on Saturday night.