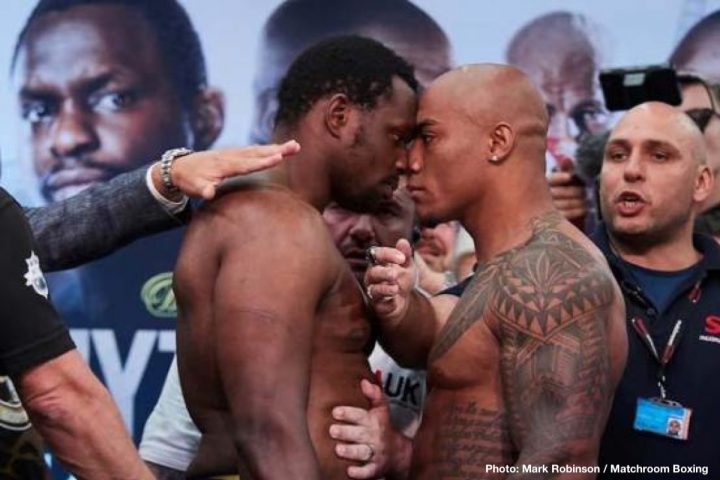 By Mike Smith: Dillian Whyte weighed in at a soft looking 254 pounds on Friday afternoon for his fight against 2008 Olympian Oscar Rivas on Saturday night at the O2 Arena in London, England (LIVE on DAZN in the US) Rivas (26-0, 18 KOs) weighed in at a sculpted 239.2 pounds, and looked like a statue from the bronze age.

The winner of the Whyte vs. Rivas fight will be the interim WBC heavyweight champion. As part of the World Boxing Council’s resolution, the Whyte-Rivas winner will get a title shot against the WBC champion by late May 2020.

Whyte (25-1, 18 KOs) and Rivas went head to head during the fce off, and eventually had to be separated by their teams when it looked like it was heating up between them. An upset looking Whyte angrily glared at Rivas after the two were pulled apart. It’s unclear what Whyte was upset about, because he’s the one that initiated the head-to-head action during the face off.

Whyte’s weight is a concern

One has to be a little concerned with Whyte’s weight, because his midsection looked soft. The 254 pound Whyte is eight pounds heavier than the 246 lbs. he weighed for his last contest against Dereck Chisora last December in their rematch. Whyte had worked hard in training camp to get his weight down for the Chisora fight, and it paid off with him scoring an 11th round knockout victory. Dillian might have taken it easy after his win, and packed on too much weight for him to trim off. He’s looks visibly fatter for the Rivas fight than he did for the Chisora rematch.

“I will come to entertain tomorrow night, to put on the best show and bring pain. It’s going to be an all-out war,” Whyte said to Sky Sports after weighing in.

Whyte might have gained confidence to come in heavier for this fight after watching the tubby 268 pound Andy Ruiz Jr. destroy Anthony Joshua in seven rounds last month on June 1 at Madison Square Garden in New York. Ruiz Jr. showed in that fight that weight is just a number, and it doesn’t play a part in the outcome of his fights. However, that’s Ruiz Jr., and not Whyte. Ruiz Jr. has fast hand speed, and he’s always been heavy. Whyte isn’t that quick, and he performs better when his weight is down in the low 240s.

The 6’4″ Dillian is promising to inflict pain on the unbeaten 6’0″ Rivas on Saturday night at the O2 Arena. Although listed as 3 1/2″ inches taller than Rivas, Whyte looked only marginally taller than the Colombian fighter when they stood head to head in the face off. It’s possible that Rivas might have been wearing elevator shoes to make himself look taller.

“I will come to entertain tomorrow night, to put on the best show and bring pain. It’s going to be an all-out war,” Whyte said.

A loss for Whyte on Saturday night would mean that he’s wasted the last four years of his career fruitlessly pursuing a world title shot against WBC heavyweight champion Deontay Wilder. During that time, Whyte has turned down two world title eliminators against Kubrat Pulev and Luis Ortiz, and then turned up his nose at a title shot against former IBF/WBA/WBO champion Anthony Joshua. Whyte’s methods in chasing a world title shot have been questionable. Rejecting two title eliminators against Pulev and Ortiz were confusing moves by Whyte, because his overall goal was to fight for a world title. But then to turn down a title shot against Joshua, it was a confusing move on Whyte’s part. Now at the end of it all, if Whyte loses to Rivas, he’ll have nothing at all to show for his last nine fights that have consumed four years of his career.