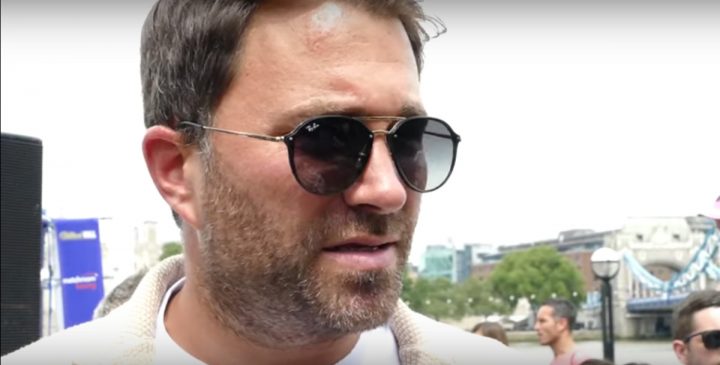 By Charles Brun: A bitter sounding Eddie Hearn says he declined being involved in Amir Khan’s recent fight event against Billy Dib in Riyadh, Saudi Arabia last Friday night. Hearn gives Khan props for getting paid for the Dib fight, which turned out to be a brutal mismatch. Hearn says the fight that he wants Khan (33-5, 24 KOs) to take is against Kell Brook.

Hearn is calling the Khan-Brook match a “Legacy fight.” As over-the-hill Khan and Brook are both looking right now, it’s difficult to take Hearn serious in referring to a match-up between these two faded British welterweights as anywhere close to being a “Legacy fight.” It’s fair to call it an “Old timer’s fight” or “Better late than never fight,” but it hardly fits in being called a “legacy fight.”

One can’t blame Khan for not wanting to fight Brook

It’s seven years too late for Khan and Brook to be fighting in a legacy fight. Brook has suffered two stoppage losses since 2016, and he’s no longer fighting against highly rated opposition. At this point in Brook’s career, he’s just sitting on the sidelines, largely forgotten by the boxing fans. You hate to say it, but a lot of fans view Brook as yesterday’s news, because he’s no longer fighting relevant opposition. As the saying goes, ‘Out of sight, out of mind.’ That’s the case with Brook. He’s hindered his own career by backing off from fighting talented opposition after his loss to Errol Spence Jr. in 2017.

Sounding like he’s pleading with Khan, Hearn said that he need to make the fight for the good of the British boxing public. Hearn’s tone sounded bitter in talking about how Khan should take the fight with the inactive Brook (38-2, 26 KOs)

“Our contract with Amir was up with Amir before his last fight [against Billy Dib],” said Hearn to secondsout. “We were asked to work with the Saudi event, which we declined. I know Amir gets a lot of stick by people, saying the event [Khan-Dib] was a joke, but he still went and done it. Amir actually went out and done it, and got paid. So you have to give him props. But at this stage of Amir’s career, what is he after? Does he just want the money? Does he want to do different little things or does he want a legacy fight for British boxing against Kell Brook? For me, it’s the latter,” said Hearn.

Here are the guys that Khan should be looking to take on for a legacy fight:

“I don’t know if that’s what he wants,” said Hearn in discussing what Khan’s objectives are with the remaining time he has left in his pro career. “If he can get a load of money taking an easy fight in Saudi [Arabia], you can’t blame him. This is boxing. I want to say to him, come on, let’s give the British public one more fight, a major fight against Kell Brook. That’s what my pitch is. If he gets the [Manny] Pacquiao fight, you’ve got to let him take the Pacquiao fight. But if he doesn’t, I think he should fight Kell Brook,” said Hearn.

If Khan is just out for money, then he should listen to Hearn, and face Brook if he can’t get the Manny Pacquiao fight. Khan surprised the media this week by announcing that the contracts have been signed for a fight between him and Pacquiao for November 8 in Riyadh, Saudi Arabia. However, Pacquiao and his publicist have since both denied that a fight with Khan has been signed. So, it’s unclear why Khan is talking about a fight with Pacquiao being a done deal when it apparently it hasn’t.

If Khan doesn’t fight Pacquiao next, then Brook could be a good option. Of course, with the kind of money that Khan is getting to fight in Saudi Arabia against soft opposition, why would he even need a fight with Brook? Khan would be doing Brook and Hearn a favor at this point in making the fight with him.

Hearn: Kell Brook may never fight again if he doesn’t get a big fight

“There’s only one plan for Kell Brook, and that’s a big fight,” said Hearn. “Whether that’s [Terence] Crawford, or whether that’s someone at 154 pounds. For me, there’s no absolute guarantees that Kell Brook will ever fight again. If I can’t deliver him Khan, if I can’t deliver him Crawford, if I can’t deliver him one of those big names, he may not bother. He’s got money. He’s got his health. He’s had a good career. He hasn’t achieved what we hoped he would achieve, and what he hoped to achieve, but he’s a world champion. He’s been in some big fights. He’s beaten Shawn Porter in the States. He boxed Gennady Golovkin up at middleweight at the O2. So if you walk away, you walk away, but I want to see Kell Brook back in the big fights. But he’s made it clear that he only wants those big fights,” said Hearn.

This sounds a lot like Hearn is crying wolf in talking about Brook potentially never fighting again if he doesn’t get him a big fight. It’s likely that Hearn is saying this in order to perk Khan’s interest to make him want to throw Brook a bone by finally giving him the fight that he’s been asking for in the last 10 years. I don’t think it’s going to work for Hearn to get Khan to take the fight with Brook. At this point, Brook is already retired for all intents and purposes. He’s stalled his career out by not fighting world class opposition, and he’s now in a free fall in plummeting to earth. What a waste of a career, but Brook may not have the love for the sport anymore. Losing back to back fights against Spence and Golovkin may have taken something out of Brook.

“I think it’s a brilliant card,” said Hearn about this Saturday’s Dillian Whyte vs. Oscar Rivas card on Sky Sports Box Office a the O2 Arena. “I think it’s one of the best cards we’ve put on from top to bottom. It’s two world class heavyweights [Whyte and Rivas] fighting for the [WBC] mandatory position, and I think it’s a guy that always gives value for money in Dillian Whyte. When has he been involved in a bad fight headliner on a pay-per-view card? One fight you can say wasn’t great was the [Robert] Helenious fight. Every other fight is a great fight with Dillian Whyte,” said Hearn.

A lot of boxing fans would disagree with Hearn about this Saturday’s Whyte-Rivas card being a “brilliant” one. The headliner fighter is a decent one between Whyte and Rivas, but not a great one. Rivas is a short 6’0″ fringe contender, who was on his way to losing his last fight against Bryant Jennings when he came back to stop him in the 12th round last January.

The Colombian fighter Rivas didn’t look great at all in that fight. He looked beatable, which is probably why Hearn picked him out for Whyte to fight. When you exclude Jennings, most of Rivas’ wins as a pro have come against fluff opposition.  As far as the rest of Saturday’s Whyte vs. Rivas card, it’s a lot of mismatches.

Here are the top fights on the Whyte vs. Rivas card:

“This is going to be a war [Whyte-Rivas],” said Hearn. “Two other brilliant heavyweight fights [David Price vs. Dave Allen and Dereck Chisora vs. Artur Szpilka] on the card, a cruiserweight fight [Richard Riakporhe vs. Chris Billiam-Smith]. You’re always going to get people criticizing. Look at the other pay-per-views people are putting on. Look at the undercards. They’re absolute tosh. You’ve got Manny Pacquiao vs. Keith Thurman on pay-per-view at four or five o’clock in the morning. We time and time again deliver value for money,” said Hearn.