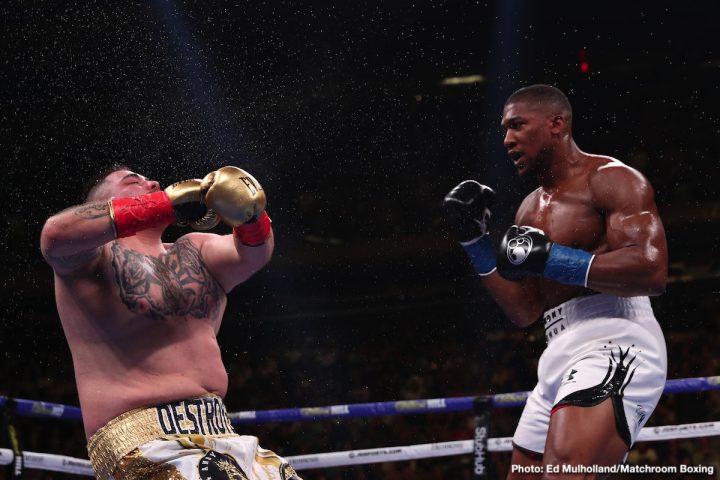 By Charles Brun: Eddie Hearn says Andy Ruiz Jr. and his team do not want the Anthony Joshua rematch to take place in the UK, and they’re using the Dillian Whyte situation as a “scapegoat” to keep from going there. Nevertheless, Hearn states that “contractually we know our position” in talking to Sky Sports News, and they’re interested in staging the fight in Cardiff, Wales. Hearn says the Joshua-Ruiz Jr. rematch won’t be taking place in the United States once again.

The first fight took place last June in New York at a venue that surprisingly favored in terms of fan applause. Staging the fight in New York, which is far away from where Ruiz lives in California, made the fight appear that was being staged overseas. The crowd was clearly on Joshua’s side throughout the contest. One can’t blame the location for why Joshua lost by a seventh round knockout to Ruiz Jr. AJ would have lost that fight even it were in the UK. His chin and stamina were too poor for him beat Ruiz Jr. on the night.

The fight would take place at the Principality Stadium, which the same venue where Joshua fought Joseph Parker and Carlos Takam in the past. Both fights involved referees making questionable decisions that caused a lot of fans to complain. The Takam fight was stopped too soon in the eyes of fans. In the Joshua-Parker fight, the referee didn’t allow either fighter to fight on the inside. The entire complexion of the fight was changed with the referee’s decision to not allow inside brawling. The taller fighter Joshua dominated on the outside with his jab.

It would make things better for Joshua and for Hearn to place the fight where there won’t be a tremendous backlash against AJ and AJ if the outcome winds up controversial. Right now is not a good time for Hearn to be involved in a fight that winds up with either a questionable decision or  odd decision making by the referee.

There are some other interesting options that would be quite iconic internationally, which does involve a lot of aggravation logistically, but does involve a spectacle that would be quite unique,” said Hearn to Sky Sports News. “I keep saying this, but in the next 48 hours Andy Ruiz’s team will be alerted to where this fight will take place. A neutral venue, he would be a lot happier with. I think I can rule out America, right now. Cardiff is still the front-runner, it’s still the favorite.”

It sounds like Hearn doesn’t want to deal with the headaches that would come with him staging the Joshua vs. Ruiz Jr. fight at an international location. It’s unclear where he would be talking about putting it. If it’s in Europe, then it would still favor Joshua.