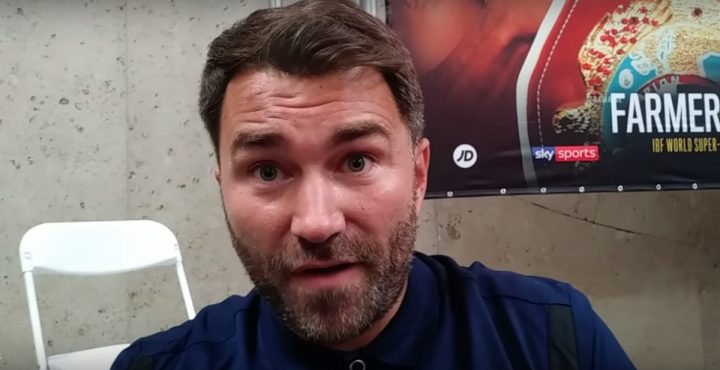 By Charles Brun: Eddie Hearn lost his temper during an interview on Friday when asked about his fighter heavyweight Dillian Whyte having reportedly tested positive for a banned substance before his fight last Saturday night against Oscar Rivas. The 31-year-old Whyte (26-1, 18 KOs) could be facing a long suspension.

Hearn reveals that Whyte had a hearing with a National Anti-Doping agency, and he was cleared to fight Rivas. That’s all that mattered, as far as Hearn was concerned. Once they made the ruling to clear Whyte to fight, then the Whyte-Rivas match was given the green light to take place last Saturday night.

Hearn appeared angry at times during an interview with “Barbershop Conversations”, and was accused of “deflecting’ by changing the subject to talk about testing in the U.S.

The alleged positive test came three days before his fight with Rivas. Hearn says that Whyte had a hearing with a National Anti-Doping panel on the morning of his fight with Rivas at the O2 Arena in London, England.  Needless to say, there are a lot of upset boxing fans, who don’t understand why Rivas and the WBC wasn’t told about Whyte’s test.

Hearn says U.S needs to look at their own testing

“In terms of VADA and UKAD, our testing is so much more extreme than testing in America,” said Hearn during a heated interview by Barbershop Conversations. “Firstly, the VADA situation is global. When we do a big fight in America, there’s VADA testing. It’ $40,000 per fight. It’s a lot of money. When we do a fight in the UK, there’s VADA testing. So, I don’t see that as an issue at all. Look at yourselves [America]. Look at your own testing. Look at your policies. You have guys, horribly so, that have been injured lately, and even passed away. Was there a testing process for those fights? Ask yourselves these questions. In Britain, they are [tested]; they’re randomly tested by UKAD.

Hearn: What is America doing to solve the PEDs problem?

“In America, what are you doing to solve the problem of PEDs? What are you doing in America about the cheating going on? Unless VADA employs to independently monitor fighters, there is no testing program from any commission, any governing body for this country in boxing. I’m asking you a question, because you know there’s no testing in the U.S. No, there isn’t. They don’t do random testing. I do shows, and I know these fighters aren’t being tested. There are so many great things about VADA. The great thing is it’s reported. That’s one of the great things about VADA. The downside of VADA is there’s no sanctions.

They can’t do anything. So they can expose information, but who takes responsibility to make the decisions and the actions? The answer is, no one. Because look at Jarrell Miller, as an example. No one will ban him. No one will. They can’t stop. They don’t have to license him in a [state] commission, but effectively, he will find a place to box. I don’t want to discipline [Miller]. That incident is over, right, as far as I’m concerned. I can’t discipline if any fighter is confirmed [as having tested positive for performance enhancing drugs], and basically found guilty of intentionally using and doping on a substance, they should be banned,” said Hearn.

It’s unclear why Hearn wasn’t staying on the subject of Whyte during the interview. Again and again, Hearn seemed to veer off course when being asked questions about Whyte. The interviewer couldn’t help but notice that.

Whyte’s B-sample could clear him

They’re waiting for Whyte’s B-sample to be tested now following the recent A-sample results that reportedly had a positive result. As of now, Whyte is the mandatory for WBC heavyweight champion Deontay Wilder (41-0-1, 40 KOs) after beating Oscar Rivas (26-1, 18 KOs) by a 12 round unanimous decision last weekend in a title eliminator at the O2. Whyte won the interim WBC heavyweight title with his victory. If the results of the fight stand, Whyte will be getting a title shot against WBC champion by late May 2020.

As long as Whyte’s B-sample is negative, this whole case should be done. Whyte can then move on to his next fight against someone later this year. Hearn wants to keep Whyte busy while he’s waiting for his eventual title shot against WBC champion Wilder.

Dillian Whyte has to prove himself to people says Hearn

“You don’t know anything about the case, at all” Hearn said when asked about the Dillian Whyte allegedly testing positive for dianabol. “You’re following a case from Thomas Houser. Let the truth come out. Let him have his say. At the moment, he’s just presumed guilty, right? His case is his case. He will deal with his case. I found out; it wasn’t long before the fight. There will be a legal case going on, and a confidential case when Dillian Whyte will effectively have to prove to all people that he’s clean. Right now, you read an article, he’s guilty. Let him have his [say]. It’s a bit of a different scenario [compared to Jarrell Miller], a massive difference. You’re getting your facts wrong every time. It wasn’t two days [before the Rivas fight].

Let the guy have his process. I found out about it. We were told that he would have to open up his [testing] samples to have a hearing. This was like a day before the fight. It’s impossible to open a B-sample , get that done, get that tested [quickly]. The only choice he had was to present all the information. Mainly, this will come out in time. VADA tested, that he paid for, that he had 12 weeks out to the fight,which was tested rigorously all the way up. A list of that information will eventually be shared, and this is pivotal to the case, was presented before the National Anti-doping panel, which is an independent panel assigned by UKAD to hear a case,” said Hearn.

If Whyte’s B-sample tests positive, then it’ll be up to the independent National Anti-Doping Panel and British Boxing Board of Control what direction they want to take with his case. Whyte tested positive for a banned substance seven years ago in 2012, and he was given a two-year ban.

“My responsibility is to follow the rules. I have a contract with both fighters that says, you must be cleared by the Commission, the British Boxing Board of Control, right?” said Hearn. “I’ve got to follow that contract. Now, he [Whyte] had that hearing, right? It was on the day of the fight [with Rivas]; on the morning of the fight. No, it’s not [incriminating], because that’s the process, because where it was heard, when we found out the information, that was the only option we were given. It wasn’t me saying. It was about 36 hours prior [to the Rivas fight], because we had to have a hearing,” said Hearn about when he learned about Whyte’s case. “That was what he [Whyte] was instructed to do. Because they had nothing to do with UKAD,” said Hearn about why the World Boxing Council wasn’t notified of Whyte’s test results.

That’s a rule, that’s a fact. In a situation where there’s a hearing where a fighter has to be heard, if that fighter is cleared, that fight takes place. So I see your argument. Do I think they should have told Oscar Rivas? No, no, no [should the WBC, Rivas and fight fans been told about Whyte’s test results]. That’s not up to me and the WBC. That’s up to the Commission dealing with the Commission. He was cleared. Why did the governing body clear him? Answer the question,” said Hearn.

Hearn says that UKAD and the British Boxing Board of Control have a confidentiality agreement when discussing cases of fighters.  That’s presumably why the World Boxing Council, Rivas and his team weren’t told of Whyte’s results from his recent drug test.

Whyte was cleared by the BBBofC to fight Rivas says Hearn

“You’re a clown. Everyone’s laughing at you.,” said Hearn in criticizing the interviewer. “You’re a clown. It’s the governing bodies’ job, and the commission to tell you that. You get second hand information like a second hand car. Next question. I’m not deflecting. You’ve got to get your facts right. The facts are, before the fight, he was asked to provide information at a hearing by a governing body.

That hearing took place, all the facts were presented, he was cleared to fight. I’m the promoter of the fighter. I have a contract with the fighter that say, ‘if a fighter is cleared to fight by the British Boxing Board of Control, that fight is on.’ Speak to the governing body, speak to the commission…you’re deflecting the situation. He was cleared by the people in charge, not me. I’m not in charge of the national doping agency.

At the end of the interview, Hearn looked like he lost his composure and resorted to name calling. That was disappointing to see the Matchroom promoter act out like that. There’s obviously other ways of handling interview questions without dismissing an interviewer’s questions by calling him names.

Hearn: Why was Whyte cleared?

No, no, no, no. I knew he had to go and provide information to the National Doping Agency,” said Hearn. “Understand what you’re talking about, because you don’t know what you’re talking about. Ask yourself this: why was he cleared? Answer the question. I’m telling you, he was asked to present information. I’m telling you, he had a hearing,” said Hearn when asked if PEDs were involved with Whyte’s hearing with the National Anti-Doping agency.

“Why won’t you answer the question? Why was he cleared to fight? No, I wasn’t. No, I wasn’t,” said Hearn when told that he was there at the hearing. “You’re a clown. Next question,” said Hearn.