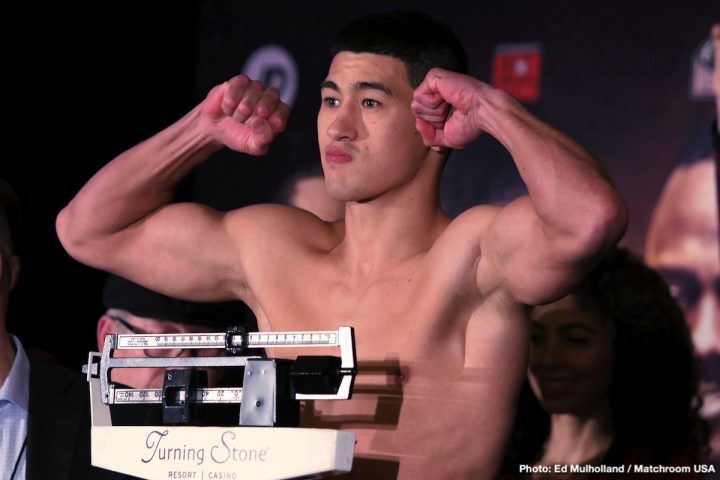 By Peter Axline: Dmitry Bivol has thrown his hat into the ring in volunteering to be the next opponent for Saul Canelo Alvarez on September 14. Bivol is willing to fight Canelo at 168 or 175.  It would show a lot of bravery for Canelo to fight Bivol, because he’s not old and he’s still undefeated.

Canelo is trying to get a fight against WBO light heavyweight champion Sergey Kovalev, who is regarded by many boxing fans as the weakest link among the 175 pound champions. The negotiations for the Canelo-Kovalev fight is ongoing.

The undefeated Russian Bivol is considered to be the #1 at light heavyweight in the eyes of a lot of boxing fans. He’s with DAZN, so arranging a fight between him and Canelo Alvarez should be fairly easy if the interest is there with the Mexican superstar.

Bivol says his management has attempted to arrange unification fights against the other light heavyweight champions, but they’ve not heard back from any of them.

“If Canelo Alvarez wants a true challenge on September 14 he can look no further and fight me at the super middleweight limit or light heavyweight,” said Bivol.  “My team has had discussions with representatives of Sergey Kovalev, Artur Beterbiev and Oleksandr Gvozdyk, and there has been no response. It’s time for me to unify at light heavyweight or fight one of the world champions at super middleweight, “

Bivol needs to be approved by DAZN for Canelo to fight him in September. The problem with Canelo fighting Bivol is a lot of casual boxing fans have never heard of the Russian fighter or seen him action. Recently, Canelo fought a lesser name in Rocky Fielding on their network last December. As a result, they won’t want to agree to let Canelo fight Bivol, even though he might be the best fighter at 175.

A decision must be made soon for Canelo’s next fight

Canelo needs an opponent in a hurry for his September 14 date on DAZN, and his promoters at Golden Boy haven’t been able to get Kovalev to agree to their offers. Kovalev is the #1 target for Canelo. DAZN has approved two fighters for Alvarez’s next fight, Gennady Golovkin and Kovalev.

While GGG would be overjoyed at getting he trilogy match against Canelo, he’s not someone that interests him. As far as Canelo is concerned, he’s finished the rivalry with Golovkin after beating him last September. He doesn’t want to get stuck fighting GGG repeatedly just to make him a small fortune. Canelo still views boxing as a sport, and not just a vehicle to make as most money as possible

DAZN has tied up Canelo’s hands by approving only Kovalev and Golovkin for his next fight. It forces Canelo to put a deal together with Kovalev in a rapid hurry. However, if Kovalev is asking for too much money, then Canelo will need to turn his attention to Golovkin.

“I have also said that I am interested in fighting Callum Smith and Gilberto Ramirez at 168lbs., but never heard any response.  I can make super middleweight and would love the opportunity to fight for a world title in that division.”

Bivol has had no lucky attempting to get WBA Super World super middleweight champion Callum Smith and former WBO 168 pound champion Gilberto ‘Zurdo’ Ramirez to fight him. It’s not surprising that Ramirez isn’t chomping at the bit to face Bivol, because he’s with Top Rank Boxing. They’re on the other side of the tracks on ESPN. Since Bivol is with DAZN, that would make it a big problem trying to setup a fight that would keep both networks happy. If Bivol were super popular, then Top Rank would agree to do the Bivol-Ramirez fight. That’s not the situation right now for Bivol.