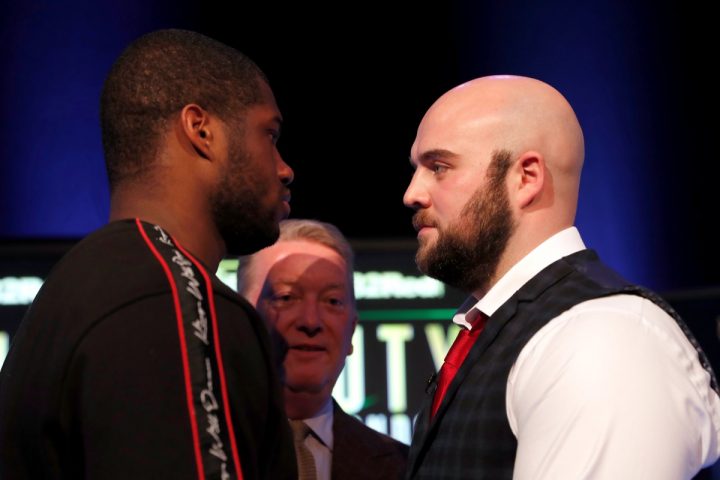 By Charles Brun: Undefeated heavyweight prospects Daniel Dubois and Nathan Gorman will be going at it for the vacant British title on ESPN+ and BT Sport from the O2 Arena in London, England. A lot is riding on the line for these two heavyweights. It’s not so much the British title that is important. It’s more about winning, and moving forward to bigger and better things. The start time for the card is at 2:45 p.m. ET streamed live on ESPN+ in the U.S.

There’s not much separating the two heavyweights in the power department. Dubois (11-0, 10 KOs) might be a little stronger, and slightly faster than the 23-year-old Gorman (16-0, 11 KOs), but not by much. The two are close enough in terms of power that either of them can score a knockout tonight if they land a shot right on the button.

Dubois will go for the KO if it’s there

“There are no worries. I have worked hard in the gym, listened and just want to do a job. If the opportunity is there I am going for the knockout,” said Dubois. “I am gonna come out in the first round fast, sharp and put it all on the line. This is a big difference to our sparring. This is a fight. I am a cool guy,  I just minded my own business when I was around Nathan in the amateurs”

It might be wise for the 6’5″ Dubois to be careful tonight, because if he gets reckless, Gorman could catch him with a big shot and take him out. Richard Lartey had Dubois looking hurt early on last April after clipping him with a big shot. Although Dubois ultimately prevailed in stopping Lartey in the fourth round, there were a few tense movements there were the outcome wasn’t assured.

Gorman is coming into the fight off the back of three impressive wins over Razvan Cojanu, Kevin Johnson and Kamil Sokolowski. Those are three solid second tier level fighters. Gorman looked good in beating all three of them. However, his hand speed looked slow, and not where it should be for him to compete against a world class fighter like Dubois. That’s the one thing that could get Gorman in trouble tonight. He’s not quick of hand, and he’s there to be hit.

Dubois has too much size, power for Gorman to hang with him for long. Unless Gorman catch Dubois with a big shot, he’s going to get chopped down by one of his big shots. Boxing News 24 sees Dubois scoring a fifth round knockout. Gorman will make it tough, but he’ll ultimately fall apart from the pressure that Dubois puts him under.

Undefeated heavyweight prospect Joe Joyce (9-0, 9 KOs) puts his perfect record on the line in a 12 round fight against American Bryant Jennings (24-3, 14 KOs) in a fight that is expected to be competitive from start to finish. The 2016 Olympic silver medalist Joyce hasn’t had any real competitive fights since he turned pro in 2017. This could be the first if Jennings can stand up to his punching power.

Joyce, 256 pounds, will have a 30 pound weight advantage in this fight over the 226 pound former heavyweight world title challenger Jennings.

Joyce wins this fight by a 10th round knockout over Jennings. The American fighter will give a good effort, but he’ll ultimately be too light to handle the size of Joyce.

Williams (20-2-1, 15 KOs) comes into his fight against Karim Achour (27-5-3, 4 KOs) with a four fight winning streak going for him since his consecutive losses to former WBO 154 pound champion Liam Smith in 2017. Williams-Achour will be fighting for the vacant World Boxing Council Silver middleweight title.

Williams will be too heavy handed for Achour, and this writer sees him winning by a fourth round stoppage. Achour, 32, lost to former IBF middleweight champion David Lemieux by a 12 round unanimous decision last May. He also has losses to Martin Murray and Lucas Konecny.