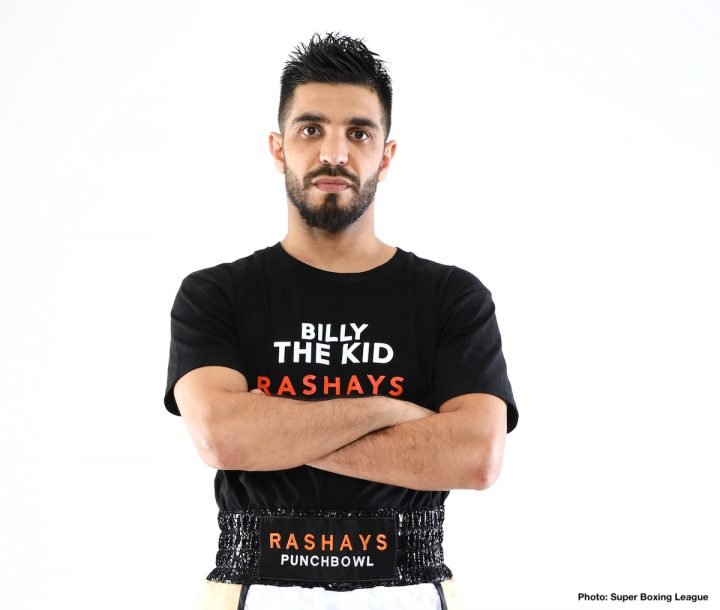 By Pete Axline: Billy Dib says he’s going to out and KO Amir Khan this Friday night. Dib, 33, sees Khan as a fighter on the decline, who is focused on just making money at this point in his 14-year pro career.

Khan lost his last fight to WBO welterweight champion Terence Crawford by a sixth round stoppage last April. A lot of boxing fans think Khan quit in that fight to avoid suffering a clinical stoppage.

Khan-Dib will be fighting for the vacant WBC International Welterweight title.

The WBC were planning on having Khan fight for their commemorative Pearl championship belt, but after the injury to his opponent Neeraj Goyat, the sanctioning body changed their plans.  Khan vs. Goyat would have been a special fight involving fighters from Pakistan and India battling each other. Fighters from two countries had never competed against each other in a boxing event.

Khan vs. Dib winner to be given top five ranking by WBC at 147

The winner of the fight will be moved to the top five in the World Boxing Council’s 147 pound ratings.  It’s unclear whether Khan would be interested to fight for the WBC title, since he’s targeting WBA ‘regular’ welterweight champion Manny Pacquiao, and Kell Brook. The WBC belt is currently held by Shawn Porter, but it could soon be in the hands of IBF champion Errol Spence, considering those two will be facing each in a unification match in September. Spence would be a nightmare opponent for Khan to fight at this point in his career, and he likely will choose not to take the match. There’s still a lot of money for Khan to make fighting Pacquiao and Brook.

Former IBF/WBA light welterweight champion Khan (33-5, 20 KOs) will have a big size advantage going for him when he faces former IBF featherweight champion Dib (45-5, 26 KOs) when they battle it out in a 12 round contest this Friday, July 12 at the King Abdullah Sports City, in Jeddah, Saudi Arabia.

Dib has no confidence in his chances of winning a decision against Khan. He’s the A-side fighter with the height, power and the speed advantage going for him. Dib is moving up in weight two weight classes to fight Khan at welterweight. Khan was scheduled to fight Neeraj Goyat, but he suffered an injury in an automobile accident two weeks ago, and had to pull out of the fight.  Rather than cancel the card, Khan’s management found former IBF featherweight champion Dib for him to square off against. Ideally, it would have looked better if someone from the welterweight division was found for Khan to fight, but it looks like he doesn’t want to take any risks right now with his career. Khan has a shot at potentially facing Manny Pacquiao soon, and he cannot afford a loss right now.

“The only way I win is to lay him out. I’m gonna ice him,” said Dib. “Amir definitely WAS a great champion, a proven warrior But in the past few years there’s been a major decline, a lot of chinks have emerged. He’s no longer the fighter who schooled the likes of Devon Alexander and Marcos Maidana. Today, he’s fighting for different reasons….money!”

Dib isn’t much of a puncher, so it’s not going to be easy for him to knockout Khan unless he catches him with the perfect shot. If Khan wins the fight by a decision, the chances are strong that it’ll be a decisive victory. The one thing that Khan is able to do is box, and he’s going to have a big advantage in size and speed in this fight. It obviously helps that Khan picked a fighter that competes two divisions below him in Dib. You can say that Dib is four divisions below Khan, because he’s fought most of his career at featherweight. It was only recently that Dib moved up to lightweight for a couple of fights.

Khan has had problems turning his career around following a sixth round knockout loss to WBC middleweight champion Saul Canelo Alvarez in 2016. Following that loss, Khan stayed out of the ring for close two years before returning in 2018 to defeat Phil Lo Greco and Samuel Vargas. Khan resisted the idea of fighting Kell Brook, as his promoter Eddie Hearn of Matchroom Boxing was hoping he would, and instead he fought WBO welterweight champion Terence Crawford on ESPN PPV last April, and was stopped in the sixth round.

Dib might not have seen Khan’s fight against Marcos Maidana in 2010. Khan certainly didn’t school Maidana. That was a very hard fight for Khan in which he was almost knocked out in the 10th round. There was a lot of criticism directed at the referee for that contest with the way he continually pulled Maidana away from Khan after he had him hurt in the 10th round, and was trying to finish him. Khan might have been knocked out if the referee didn’t separate the two repeatedly when Maidana was teeing off on the hurt Amir.

‘Amir Khan is absolutely the right guy for me to fight,’ said Dib. “I’ll be far stronger, more thickset and hopefully I’ll carry my speed up cos I’m quick, too. Everybody knows I’m a quality body puncher and I’ll be bringing even more strength and power. I’ll definitely test Khan. I really fancy my chances,” said Dib.

Dib looked powerful in his last fight in stopping journeyman Surachet Tongmala in the first round last April at lightweight. However, that fight was in the 135 pound weight class, not 147, and he was facing a journeyman in Tongmala. Dib will now be moving up another two weight classes to fight Khan at welterweight, and it might prove harder for him to score a knockout unless his punching power increases with the move up. We just saw WBC heavyweight champion Deontay Wilder gain punching power in putting on a little weight. Perhaps we could see Dib with more power on his shots now that he doesn’t drain down in weight to make the 126, 130 and 135 pound weight classes.