Canelo Alvarez vs. Sergey Kovalev NOT happening next 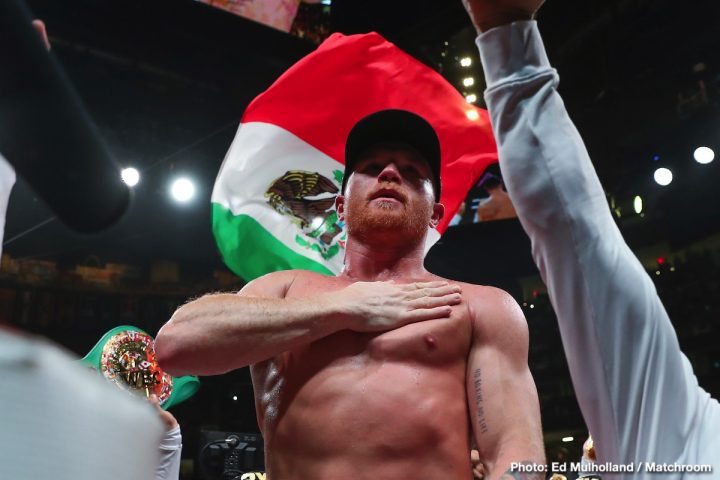 By Aragon Garcia: Sergey Kovalev WON’T be fighting Saul Canelo Alvarez next, according to Michael Benson. The offer that Canelo’s promoters at Golden Boy Promotions wasn’t what Kovalev and his management were looking to get for the fight. Kovalev, 36, will now defend his WBO light heavyweight title against his mandatory Anthony Yarde on August 24 in Russia. It’s no great loss that Canelo won’t be fighting Kovalev, because that wasn’t a huge fight anyway. Kovalev recently knocked out by Eleider Alvarez. Although he avenged the loss, it wasn’t that long that he was beaten by the Colombian fighter.

It was reported earlier this week that Kovalev was offered less than the $6.5 million that Jarrell ‘Big Baby’ Miller was offered for a fight against Anthony Joshua. What’s unclear is how much Kovalev (33-3-1, 28 KOs) was hoping to get for a fight against Canelo. On social media, they’re saying that Kovalev was offered $5 million for the Canelo fight. It would be interesting to know how much Kovalev will get for defending his WBO title against Yarde. If it’s considerably less than what he would have made fighting Canelo, then it’s a mistake that he didn’t accept the offer from Golden Boy Promotions.

Given Kovalev’s advanced age, and the fact that many boxing fans view him as the weakest link among the light heavyweight champions at this time, Canelo wouldn’t have received a lot of credit if he moved up to 175 and dethroning him. Canelo doesn’t need to get a reputation for fighting old timers, because he already recently fought 37-year-old Gennady Golovkin twice. It’s time for Canelo to fight younger guys, not guys nearing 40, heading towards their golden years in the sport.

The fighters that Canelo would get credit beating at 175 would be IBF champion Artur Beterbiev, Dmitry Bivol [WBA] and Oleksandr Gvozdyk. Even a win for Canelo over the highly ranked light heavyweight contender Marcus Browne would likely result in him receiving more praise than what he’d receive in beating Kovalev. The problem with Canelo fighting Kovalev is the Russian fighter has lost three out of his last six fights. How do you get motivated if you’re Canelo fighting a guy with a 3-3 record in his last 6 fights? You don’t, which is why Canelo is better off facing WBO middleweight champion Demetrius Andrade or even former middleweight champion Golovkin.

These are Canelo’s options for September 14

It’s thought that the two guys that have the best shot at getting a fight against Canelo for September are Andrade (28-0, 17 KOs) and Munguia (33-0, 26 KOs). The potential unification match against WBO middleweight champion Andrade would give Canelo a shot at winning the final 160 pound title not already in his possession. It’s not a great opponent obviously for Canelo, and it could turn out to be an even worse fight than Alvarez’s match against Erislandy Lara in 2014. Lara ran from Canelo all night long in that fight five years ago. However, Canelo would likely be making DAZN happy by facing Andrade, because he’s signed with them. Canelo is reportedly NOT interested in fighting Golovkin, which has got to be more than a little upsetting to DAZN, because they signed both guys hoping that they would face each other.

GGG not likely to get Canelo trilogy fight

It’s arguably too soon for Canelo and Golovkin to face each other in a trilogy fight. With that said, you can’t blame Canelo for not wanting to fight Golovkin, because the former IBF/WBA/WBC middleweight champion GGG has done little to stay relevant by taking on good opposition since his loss to Canelo last September. GGG took nine months off after that fight, and then came back in beating an unknown Canadian fighter Steve Rolls. Golovkin looked poor against Rolls. Afterwards, GGG seemed disinterested when asked at the post-fight news conference if he would be open to fights against Demetrius Andrade, Daniel Jacobs or Jermall Charlo.

GGG made it clear that Canelo was his priority, which is fine, but it’s not a good thing that he’s not fighting someone relevant to increase interest in a trilogy fight between them. There’s bad blood between Canelo and Golovkin, so it’s understandable why Alvarez doesn’t want to fight him again right now. Golovkin is making it easy for Canelo to ignore him by choosing not to fight the lions in the 160 pound division like Jermall Charlo, Andrade or Jacobs. Those are guys that GGG should be fighting, but he’s not. And if he doesn’t want to fight them, then Golovkin should be calling out super middleweight champion Callum Smith, Caleb Plant, Billy Joe Saunders or David Benavidez. Right now, Canelo is showing that he’s fearless, and willing to fight anybody from 154 to 175.

Golovkin needs to do the same thing.  A trilogy match between Canelo and Golovkin can still take place in the future, but GGG needs to show that he’s still willing to fight the best fighters in the middleweight division NOT named Canelo. It’s an easy choice for Golovkin to take a risky fight against Canelo, because GGG will make huge money even if he loses the fight. It’s a different story for Golovkin to take a risky fight against a young lion where he won’t make huge money like Charlo or Andrade. Canelo wants Golovkin to earn the third fight with him, and he’s got to show that he’s willing to do that.

It’s not going to help Golovkin for him and his promoter Tom Loeffler to try and get DAZN to pressure Alvarez to take the fight. They need to listen to Canelo, and do what he says if they want to get the trilogy match. If Golovkin loses to Charlo or Andrade, so what? At least he tried. Perhaps Canelo will feel sorry for Golovkin afterwards and throw him a bone? If GGG shows courage in taking on Callum Smith, Charlo, Andrade, Kovalev, Beterbiev or Gvozdyk, he’ll likely earn the respect from Canelo, and he could get the third fight with him.

Would Golovkin be willing to fight any of those guys? Probably not, but you never know. At this point, it’s not going to help GGG to keep fighting obscure bottom feeders in the middleweight division to pad his record, and count on Canelo fighting him again simply because they’re both with DAZN. It’s probably not going to happen. Canelo wants GGG to earn the third fight, and he needs to start listening to the Golden Boy star.