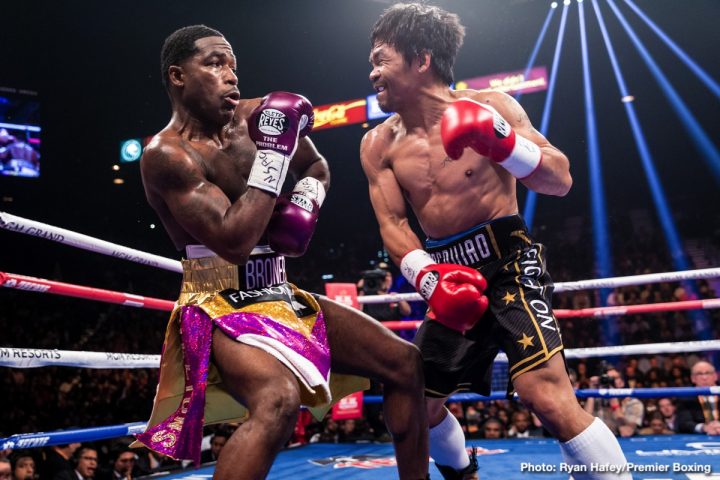 Thurman won the WBA Welterweight title back in 2013 following a defeat against the highly regarded Diego Chaves (22-0) who was the previous champion, and defended it for six years, although nearly two of those years he was out on injury. Pacquiao, the current WBA Welterweight titleholder, defeated the much younger Broner back in January via a wide Unanimous Decision, wherein Broner’s offense was neutralized to the point that he landed no more than eight punches per round.

Not to take anything away from Broner, who at 29 years of age still has a lot of gas in the tank, and is a talented fighter and entertainer, if not as talented or entertaining as Pacquiao. Broner fought a very different fight against Pacquiao than Thurman did, relying exclusively on his counter-punching ability and reflexes, hoping to catch his opponent coming in with a big shot. After feeling some of Manny’s power shots early in the fight, and also getting caught flush in the 7th round, Broner thought it unwise to exchange with him, lest a stoppage would occur.

Thurman on the other hand, while also a decent counter puncher and having arguable stronger hands than Broner, was able to outland Pacquiao last Saturday, 210 of 571 (37%) of his punches, against 195 of 686 (28%). Pacquiao was tagged repeatedly with the heavy hands of Thurman, who has been known as a knockout artist early in his career. Per Manny, he hasn’t fought anybody as physically strong as Thurman since Antonio Margarito back in 2010.

Thurman, ten years Pacquiao’s junior, did about as good as anyone would expect an undefeated champion to do. He landed hard shots and gave problems to Pacquiao in the middle rounds of their fight. However, the world’s only 8-division world champion proved that he still has the skills to pay the bills, dropping Thurman with a right hook in the first round to the shock and awe of the arena. For the next few rounds, he proceeded to win rounds convincingly, making Thurman look like the older man in the ring, before fading in the 7th and relinquishing the middle rounds to the sturdy American. Thurman proved his grit, and dug deep. But the problem with the rounds he won is that, while Pacquiao’s rounds were convincing, Thurman’s were mostly close, and he took punishment from Pacquiao even in rounds which he won.

Thurman arguably won the 3rd, 5th, and 7th rounds, but each of them he took hard shots which visibly affected him. At the end of the 5th round, which could’ve gone to Manny, Thurman walked back to his corner with a bloody nose looking dejected, spitting blood onto the floor and looking at it. The 10th round sealed the American’s fate after Manny landed a hard body shot to Thurman’s right side, causing Thurman to double over in pain and send him reeling, and he ran for the rest of the round to survive. He did barely enough to win the 11th in my eyes, but Pacquiao finished strong in the 12th, taking the round. Pacquiao deserved the victory, though it was competitive. And though Manny took more of a beating against Thurman than any recent fighter, Thurman definitely looked worse for wear.

How would Thurman do against Broner should they fight now? Thurman has the better resume. He defeated Shawn Porter (30-2-1) back in 2016, who Broner convincingly lost to in 2015. Thurman has greater power, greater athleticism, and more variety than Broner. Another telling piece of evidence is their performance against their most recent opponent: Manny Pacquiao. Broner couldn’t do anything to neutralize Pacquiao’s offense. Thurman was able to press the fight in the middle rounds, win a few of them, and make the fight close, despite getting knocked down and nearly getting stopped in the 10th. Thurman showed heart, determination, and a willingness to put himself on the line against Pacquiao.

While some fans may diminish Thurman’s stock due to losing to a 40 year old Pacquiao, I argue that his stock actually improved. Manny has proven everyone who thought he was done wrong, including myself. I predicted a SD win for Thurman, who would be too athletic, too powerful, and too big for Manny at this stage in his career. Manny actually outworked Thurman, throwing over 100 more punches than him, and looked like he expended more energy in the ring than Thurman. Broner will get outworked by Thurman, and if he exchanges, will get outgunned, because Thurman’s punches bothered Pacquiao a lot more than Broner’s did.

In what is easily the most exciting fight of the year, not only due to the buildup, but what actually occurred within the ring, the landscape of the welterweight division has changed once again. Pacquiao is now one of the top four Welterweights in the world yet again. His victory against a tough and game undefeated opponent with a belt will only encourage him. He has more heart than he knows what’s good for him, but he’s still more talented than anyone not named Errol Spence Jr. (25-0) or Terence Crawford (35-0), who are ranked higher than him and are the new young big dogs on the block.

Broner is in need of a comeback fight after his reputation took a hit following his poor performance against Pacquiao. Ivan Redkach (29-4-1) was mentioned by Broner as a front runner, following his impressive knockout of veteran Devon Alexander (27-6-1). It would be an exciting fight that is winnable by the talented Broner. If that fight doesn’t materialize, or should Broner win convincingly, a fight against Thurman at the end of the year would be a big opportunity for both to get back into the game. Both have known names, and both have held the WBA Welterweight title at one point. Thurman needs to show the boxing community that he’s still relevant, and after what sounds like Broner bashing him, he can market that fight easily and hopefully make a good payday on his way back to the spotlight.


« Regis Prograis vs. Josh Taylor on October 5 in UK for WBSS final