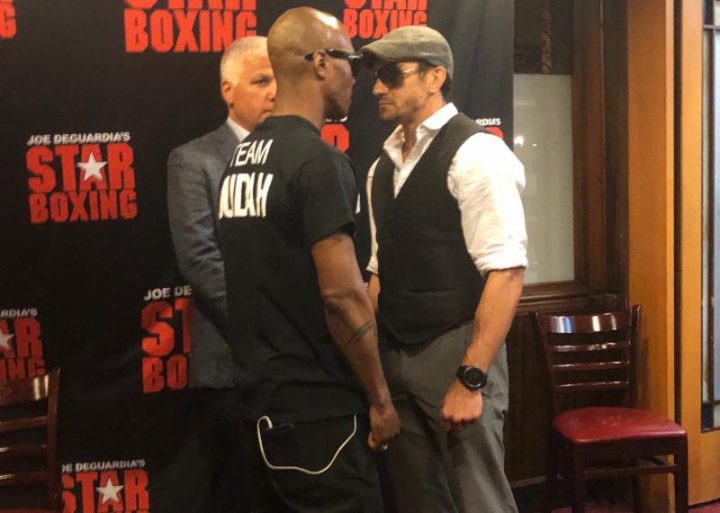 ZAB “SUPER” JUDAH (44-9 30KO’s) and CLETUS “THE HEBREW HAMMER” SELDIN (23-1 19KO’s) met today for the first time at BEN’S KOSHER DELICATESSEN, in NYC, ahead of their vacant NABA Super Lightweight showdown at Turning Stone Resort Casino on International Boxing Hall of Fame Weekend, June 7th. Quotes and photos from the event can be found below.

STAR BOXING CEO JOE DEGUARDIA:
“Brooklyn’s own Zab Judah, a future hall-of-famer, taking on another New Yorker, Cletus “The Hebrew Hammer” Seldin, is a real testiment to boxing, on the biggest weekend in boxing, at Turning Stone on International Boxing Hall of Fame Weekend.”

“On one hand we have the hardest puncher on Long Island, Cletus Seldin, with a throwback style to the 1950’s, against 6-time world champion and future hall of famer, Zab Judah”

“Be sure to tune in next Saturday night for a thrilling night of fights.”

CLETUS SELDIN:
“I have respect for Zab Judah, I respect his career, I respect what he has done … but when we get in the ring, I have no respect, no care, only determination, and one job in mind, and thats hurting the other individual in front of me, and thats it.

BRIAN BUSTO (manager Cletus Seldin)
“We are very excited and thank you all for being here. This is a great opportunity for Cletus, who has been training very hard. Be sure to tune-in.”

PETE BRODSKY (trainer, Cletus Seldin)
“We are honored to be in the main event for this International Boxing Hall of Fame weekend.”

“I have nothing but great respect for Zab and his father. AS for Cletus, he has trained with more intensity, and more focus then ever before, and you are in for a great fight.”

ZAB JUDAH:
“I want to thank the media, Joe DeGuardia and Star Boxing and everyone for coming out here today.”

“To my opponent, I respect you guys but welcome to the terror zone. I got more knockouts then he got fights.”

“You all know how serious I am, how focused and dedicated I am. Friday night, the train continues and it starts with Cletus Seldin.”

YOEL JUDAH (father & trainer of Zab Judah):
“We trained very hard for this fight. I want to thank team Seldin, I know they will come well-prepared.”

“Seldin is a knockout artist, and we think Zab is too. You get what you ask for.”

BILL HALKIAS (manager, Zab Judah):
“Thank you Star Boxing and Joe DeGuardia for this oppurtunity. I see another title in Zab’s future.”