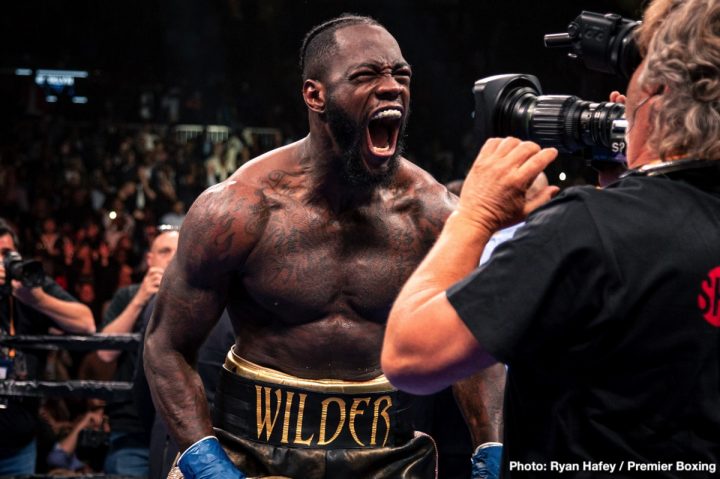 By Barry Holbrook: Deontay Wilder has mapped out a three-fight plan for him in his next three contests starting with a rematch with Luis ‘King Kong’ Ortiz in September 2019 on Showtime PPV.

Provided that the undefeated Wilder (41-0-1, 40 KOs) wins that fight, he’ll next be defending his WBC title against lineal champion Tyson Fury in a rematch in early 2020, and then finally a unification fight against IBF/WBA/WBO champion Anthony Joshua in mid to late 2020.

The rematches against Ortiz and Fury have signed contracts, according to Wilder. The only fight that needs to be negotiated is the Joshua undisputed champion contest. That’s going to be the toughest, though, as Joshua’s promoter Eddie Hearn drives a hard bargain, and he’ll likely be looking to get an edge for his fighter.

“I’m running back. That’s what I’m doing to prove that I knocked him out,” Wilder said to TMZ Sports about his signed rematch against Tyson Fury for early 2020. “This time I’m going to do it in even a better fashion than I did the first time. You have to remember that Fury gave it all he’s got. You have to understand that every fighter that fights me, they train their hardest to give their all, because they know they’re in front of a killer. That’s what I am, man. Fury looks like it’s going to happen sometime early next year,” said Deontay.

Wilder fought Fury to a controversial 12 round draw last December in Los Angeles, California. Both fighters thought they won the fight. You can argue it either way. Wilder was robbed of a knockout by the referee, who gave a count to a knocked out Fury. The other argument is Fury looked like he’d done enough to deserve a decision. The judges scored the Wilder-Fury fight a 12 round draw, and that resulted in a lot of grumbling from fans.

Deontay scheduling the big fights for 2020

Joshua and Fury will be facing Wilder in 2020 unless something happens along the way. If Wilder loses to Ortiz or Fury, there will be additional rematches that will be taking place. Wilder isn’t saying, but it’s obvious that he has a rematch clause in the contracts for both fights. Since Ortiz and Fury aren’t mandatory challengers, they’ll have to deal with a rematch clause. That means if Wilder loses to one of both of them, he can force an immediate rematch. For his part, if Joshua loses to Andy Ruiz Jr. tonight or to his next opponent, he’ll likely have rematch that he’ll need to take care of before he can face Wilder.

“All the big fights are going to happen next year. After Fury, then you potentially have Joshua,” said Deontay. “That’s the order in my mind. The only way it won’t happen like that is if I fight Fury, and Joshua has obligations after that. Then he takes another fight, and then the [Joshua-Wilder] fight is going to happen. I’m looking at Joshua mid-2020 or late 2020. That’s what I want to finally give the fans. So I’m going from a killer to a killer, and then another killer,” said Deontay.

If the World Boxing Council makes #1 WBC Dillian Whyte the mandatory for Wilder, then that’s a fight that could come in 2020. Wilder vs. Whyte would get in the way of a Wilder-Joshua or Wilder-Fury fight. Knowing Whyte, he’ll be assertive and insist that the WBC force Wilder to make a defense against him after his September rematch against Ortiz. Whyte (25-1, 18 KOs) is facing unbeaten #10 WBC Oscar Rivas (26-0, 18 KOs) on July 20 for the interim WBC heavyweight title.

Whyte’s promoter Eddie Hearn of Matchroom Boxing says the WBC will make the Whyte vs. Rivas fight an official title eliminator now that Fury has changed his mind about wanting to fight Dillian for the Diamond title. Hearn believes that the WBC won’t ask Whyte to fight another contender in an eliminator. They’ll simply give up and make the Whyte vs. Rivas fight an eliminator. Hearn says Wilder will be allowed to face Ortiz next, but after that, he’ll have to face Whyte in early 2020. Whyte would then step in front of Fury to face Wilder in the first part of 2020. Wilder vs. Whyte is not a fight that the boxing world is eager to see, but they may be forced to if the WBC makes Dillian the mandatory. It might not be a big deal. It’ll just delay Wilder’s rematch with Fury, and his fight against Joshua.

Wilder would need to beat Ortiz, Whyte and Fury in that order before he could face Joshua. We’re probably looking at 2021 before the Wilder vs. Joshua fight takes place under those circumstances.

“I’m taking no shortcuts with my career. I’ve had the long road, and I’ve taken that,” Wilder said. “No gifts have been given to me. It’s only made me stronger, and this is why I’m the most exciting heavyweight in boxing, period,” said Wilder.