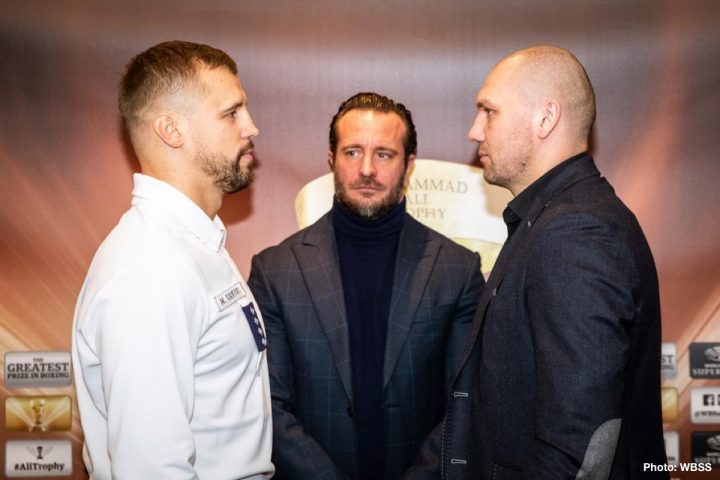 By Jeff Aranow: The World Boxing Organization has made Krzysztof Glowacki their new WBO crusierweight champion after the previous champ Oleksandr Usyk moved up to heavyweight to go after the world titles in that weight class. This means that Glowacki (31-1, 19 KOs) will be facing WBC Diamond champion Mairis Briedis (25-1, 18 KOs) as the WBO champion when the two face each other in the semifinal of the World Boxing Super Series cruiserweight tournament this month on June 15 on DAZN at the Arena Riga, in Riga, Latvia.

On Tuesday, the WBC made Usyk ‘champion in recess,’ which frees up the vacant WBC cruiserweight title to be on the line for the Briedis vs. Glowacki fight on the 15th of June. That makes things more interesting, as the winner of the Briedis-Glowacki fight will the WBC/WBO champion. The WBA title is held by Denis Lebedev, who will be facing Arsen Goulamirian next.

Here’s the news from the World Boxing Organization on Wednesday about Glowacki being made the new WBO cruiserweight champion:

For some reason, Usyk is taking his time letting go of his IBF cruiserweight title. Is he still keeping that belt on reserve in case his experiment at heavyweight ends in failure? Whatever the case, the IBF will likely strip the 32-year-old Usyk of the belt now that it’s clear that he’s going to be fighting at heavyweight. It would be a bad idea for Usyk to try and move back and forth between heavyweight and cruiserweight. He wouldn’t do justice to either division. On June 15th, Yunier ‘The KO Doctor’ Dorticos will be battling Andre Tabiti in a semifinal match in the WBSS cruierweight tournament.

It’s likely that the IBF will strip Usyk of his last remaining cruiserweight title, and have that belt on the line for the Tabiti vs. Dorticos fight on June 15. That makes the most sense. However, you never know. If the IBF let’s Usyk keep their title, and no defend it for close to two years like the WBA title with welterweight champion Keith Thurman, they can certainly do that. It would obviously be a huge negative for the contenders in the top 15 in the IBF’s rankings at cruiserweight, but that would be the sanctioning bodies’ decision if they wanted to let Usyk keep the strap. It would be better for boxing if the IBF take Usyk’s belt, and has it on the line for the Dorticos vs. Tabiti fight. If they do that, then eventual winner of the WBSS tournament will control three of the four belts.

Usyk is expected be installed as the WBO mandatory for heavyweight champion Andy Ruiz.

Now that Usyk has moved up in weight, there should be some entertaining fights between punchers. Usyk is a good fighter, but he was more of a boxer than a puncher. Guys like Glowacki, Briedis and Dorticos sit down on their shots a lot more than Usyk. They make it fun to watch them.

Adam Smith: “If Joshua loses to Ruiz again, he’ll have to take a long look at his career!’ »