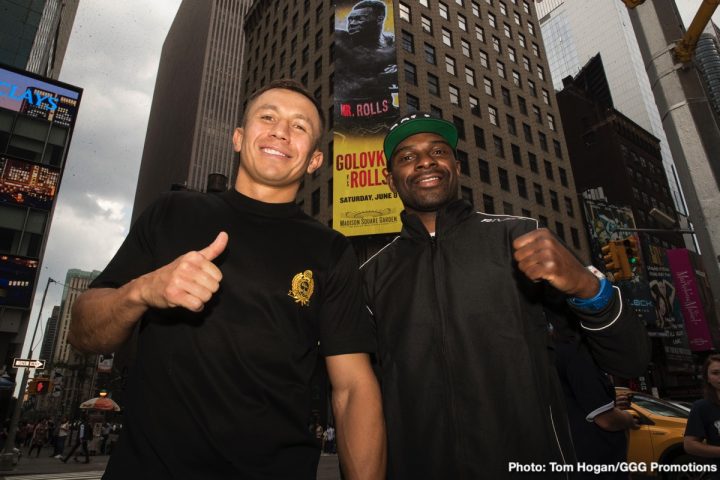 By Sean Jones: Superstar Gennady Golovkin is fighting Steve Rolls this weekend on DAZN at Madison Square Garden in New York. This will be GGG’s first fight with his new trainer Johnathon Banks, and his new style. Boxing fans want to see Golovkin’s development with Banks, as he lost his last fight against Saul Canelo Alvarez in September of last year.

Golovkin had stopped progressing under his previous trainer Abel Sanchez, who he replaced with Banks.

Golovkin (38-1-1, 34 KOs) is matched against a fighter that few fans have heard of. What things worse for GGG is all the interest in last Saturday’s huge upset loss by IBF/WBA/WBO heavyweight champion Anthony Joshua to American Andy Ruiz Jr. at Madison Square Garden. The news of Joshua’s loss has taken what little buzz there was from Golovkin’s fight against the 35-year-old Rolls (19-0, 10 KOs) on DAZN.

The fight the boxing public wants to see is the trilogy match between Golovkin and Saul Canelo Alvarez (52-1-2, 35 KO) in September. Golovkin’s trainer Banks predicts that he’ll stop Canelo within six rounds if he follows the fast pace style that he wants him to use against Alvarez. Banks feels that Golovkin used the wrong fighting style in both of his matches with Canelo. Golovkin fought at at the slow that Canelo wanted and needed for him to do well, and he was throwing one punch at a time.

“I feel like a student” said Golovkin about him being with new trainer Banks. “There was a big surprise for everybody last weekend. I’m just focusing on Steve Rolls. If I beat him, 99 percent in September [Canelo fight is happening]”

GGG insists that he’s not overlooking Rolls though. He’s not looking past him towards a fight with Alvarez in September. Golovkin lost a lot of weight that he’d been carrying around in the last few years, and he looks different. In his workouts, GGG is throwing a lot of shots. Of course, it’s a lot different throwing punches in bunches against an opponent that throws shots back. If Golovkin can be busier than he’s been in the past for his fight against Rolls this Saturday, then it’s a good sign that he’s improving.

“I have a new coach, a new teacher, and a new system. I’m not surprised. This is boxing,” said Golovkin in talking about Anthony Joshua losing to Andy Ruiz Jr. “I know Andy a long time. Everybody has a chance. This is very serious business. You can’t disrespect your opponent.”

Golovkin obviously observed Joshua wasn’t entirely focused on his opponent Ruiz Jr. in the run up to the fight. AJ took his eyes off the ball, and it turned around and bit him on the backside with Ruiz pulling off a big upset. GGG isn’t going to overlook Rolls, and that’s why he keeps telling the boxing media that he wants to focus on questions about Rolls rather than other stuff like last weekend’s fight between Joshua and Ruiz. The news of that fight has already taken a lot of air out of the interest in the Golovkin vs. Rolls fight.

Banks worked with former heavyweight champion Wladimir Klitschko in the past, but he wasn’t able to lead him to victory in his last two fights against Joshua and Tyson Fury. The corner advice from Banks was sound, but Wladimir wouldn’t follow what he was saying by going on the attack against those two fighters. For GGG to be successful with Banks as his trainer, he has to be able to what he’s asking him to do. If Golovkin on cruise control, he’ll quickly revert back to the way he normally fights and look to load up on single shots instead of fighting at a fast pace and throwing combinations.