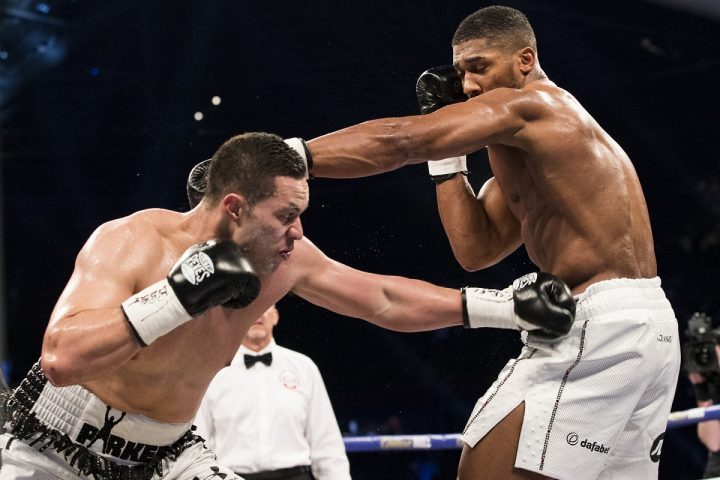 It’s an unusual choice of opponent for Parker (25-2, 19 KOs), because he’s still considered one of the top tier heavyweights in the division. For his Parker’s new promoters to put him in with an old unranked heavyweight like Leapai, it kind of makes you wonder whether they’re going to take a couple of years to try and rebuild him. Parker lost to Dillian Whyte and Anthony Joshua in consecutive fights that took place in the UK in 2017 and 2018 respectively.

Since Parker’s loss to Whyte in 2018, he came back to defeat little known heavyweight Alexander Flores (17-2-1, 15 KOs) by a third round knockout last December. Leapai is arguably a step down from Flores. It’s anyone’s guess whether Matchroom Boxing promoter Eddie Hearn is going to take a year or two to rebuild the 27-year-old Parker before putting him in with Whyte or Joshua in a rematch.

Parker vs. Molina fell through

The fight card will be shown on both DAZN in the United States and Sky Sport in the UK. The main event between Demetrius Andrade and Maciej Sulecki is a good fight, but Parker-Leapai is an awful one. That would be a good first fight of the night type of affair. In others, an off broadcast type of match.

Hearn is excited about the Parker vs. Leapai fight

The Parker-Leapai fight is a poor mismatch, but Hearn says it’s a match-up in which Parker can make a statement to the heavyweight division. Unfortunately, Leapai is well past his prime at 39, and not one of the ranked contenders. You can argue Leapai on the level of a Tom Schwarz type fighter, but he’s not been given an elevated ranking by the World Boxing Organization like he had going into his contest last Saturday night against lineal heavyweight strap holder Tyson Fury.

Leapai has done nothing with his career since suffering three consecutive defeats to Wladimir Klitschko, Malik Scott and Manuel Charr in 2014/2015. in Leapai’s three fights since then, he’s fought these fighters:

Leapai has had just three fights in the last four years, and now he’s been picked out by Hearn to face Parker. That’s interesting, but also quite disappointing to say the least. Surely, Hearn could have found someone a lot better than Leapai to put Parker in with. Some boxing fans believe that Hearn doesn’t want to match Parker up with good opponents like Michael Hunter, Filip Hrgovic, Joe Joyce, Carlos Takam or Zhilei Zhang for fear that he’ll lose to most of them. Even Dave Allen might be a problem for Parker.

“This is going to be an exciting fight between two big punchers with plenty of pride on the line,” said Hearn. “For Joe, it’s about looking good and making a statement to the division that he is ready to try and reclaim his World title. For Alex, it’s a shot to nothing to put himself right back in the mix – he’s talking a great game but we expect a show stopping performance from Joseph Parker in Providence on June 29.”

What kind of statement can Parker make beating a journeyman like Leapai? Even if Parker knocks the slow as molasses Leapai out in the first round, no one will care.

Fans view Parker vs. Leapai as a poor fight

The reaction from boxing fans on social media to the news of the Parker-Leapai fight has been almost entirely negative. The fans don’t understand why Matchroom is putting Parker in with such a bad opponent. If they can’t find a quality guy for Parker to fight, they would be better off keeping him on the sidelines until they do get someone talented rather than matching him poorly. There’s no upside in Parker fighting an old timer like Leapai.

Hearn still hasn’t rounded out the Demetrius Andrade vs. Maciej Sulecki card despite the fact that it’s less than two weeks from now. That makes it difficult to get boxing fans excited about the card when it’s still incomplete, especially when the co-feature bout is Parker vs. Leapai. Parker’s fight against Leapai is a woeful match-up.

WBA super flyweight champion Kal Yafai will be defending his title against Norbelto Jimenez on the card. This is a good fight, and it might help save the night for Hearn. Yafai should have lost his last fight against Israel Gonzalez last November in Monte Carlo. Jimenez is on the same level as Gonzalez. If Yafai doesn’t raise his game, he’s going to lose.


« Joseph Parker vs. Alex Leapai on June 29 LIVE on DAZN