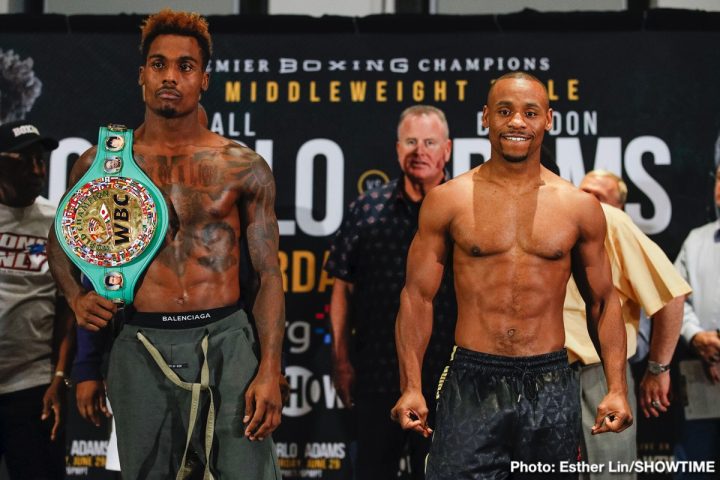 By Chris Williams: Jermall Charlo fights tonight against Brandon Adams on Showtime at 9:00 p.m. ET at the NRG Arena in Houston, Texas. The fight card is presented by Premier Boxing Champions. Charlo will be defending his WBC middleweight title against Adams (21-2, 13 KOs) in a match that is expected to end early.

The co-feature bout will likely end early a well between Erickson Lubin and Zakaria Attou. It’ll look bad if the main event and co-feature end in early knockouts, but that’s what we’re likely going to see.

This fight has early knockout written all over it, and unfortunately it’s not expected to be a competitive fight. It’s a showcase match to make Charlo look good after his controversial 12 round unanimous decision win over Matt Korobov last December in New York. The boxing world had Charlo losing that fight, but the judges gave him an arguably undeserving win by the scores 116-112, 119-109 and 116-112. In what has to be viewed as lack of confidence, Charlo isn’t facing Korobov in a rematch to clear up the controversy. Instead, Charlo is satisfied with fighting fringe contender Adams, who was recently knocked out in the second round by John Thompson.

Adams needs to be aggressive early

For Adams to have any chance of winning tonight, he’s got to make Charlo respect his punching power. That’s where his problems start. Adams isn’t known as a puncher, and that’s going to make things hard for him to be competitive against the much taller, bigger, faster and stronger Charlo. It’s been four years since the 5’9″ Adams scored a knockout in stopping journeyman Tyrone Brunson in 2015. That was ages ago, and it’s highly unlikely that Adams is going to start punching like a mule kicks tonight against Charlo.

One can excuse the low level opponent for Charlo, because this was originally supposed to have been a title defense for Jermall’s interim WBC 160 pound title. That’s not a true world title, so it isn’t all that surprising that the 29-year-old Adams was selected instead of one of the good fighters in the division. However, the World Boxing Council made Charlo (29-0, 21 KOs) their full WBC middleweight champion this week after they moved Saul Canelo Alvarez into their new WBC Franchise middleweight champion. That’s a new title the WBC created for Canelo, and there’s nothing Charlo can do now to force the Mexican star to face him.

The WBC intends giving the Franchise belt to certain fighters that they feel are super talented. WBC heavyweight champion Deontay Wilder could be the next Franchise champion that WBC board of governors vote to give that belt to. For Charlo to get a fight against Canelo, he’s going to need to upgrade the level of opposition he’s fighting. That means instead of milking his WBC middleweight title against fringe contenders like Adams, he needs to face guys that can potentially beat him like Korobov. Since it doesn’t look like Charlo has any intention doing that, he’ll probably never get a fight against Canelo.

Malignaggi: Adams must make Charlo think inside the ring

“Jermall Charlo stands out as among the elite in the division and we have a hungry contender in Brandon Adams who is confident coming off a victory in THE CONTENDER,” said Malignaggi. “Charlo is a big step-up from anybody he has faced so I am looking forward to seeing whether Adams has what it takes to test Jermall Charlo. Adams has to make Charlo think and put him in situations where he has to work a little bit harder than he expects to in order to have a chance to win.”

For Adams to make Charlo think, he’s going to need to use speed, movement and be selective when exchanging shots with him. Charlo likes to walk down his opponents to bludgeon them into submission. He frequently dives in with his power shots, so it’ll be important for Adams to be wary of when Charlo is poised to go on the attack. With the big power advantage that Charlo has over Adams, he might choose to attack him like a giant tsunami, and not back off at all. Adams won’t last long if Charlo fights in that style.  That style of fighting by Charlo will end with Adams being smashed to bits within three or four rounds if he doesn’t use his feet to escape the pressure.

Prediction: Charlo wins by quick second round knockout. Adams has zero shot at winning this fight. This fight is more about a confidence booster for Charlo, because of the way Korobov easily handled him. Unfortunately, mismatches like tonight’s fight isn’t going to improve Charlo’s boxing skills to help him the next time he fights a good opponent. Charlo has had a career worth of soft fights, so he’s not been improving. He’s a like his brother Jermell Charlo. The two of them depend on their raw power to win fights. When they face guys that know how to box like Korobov and Tony Harrison, they’re completely lost.

The hard hitting Erickson Lubin (20-1, 15 KOs) will be looking to put himself into position for a title in facing Zakaria Attou (29-6-2, 7 KOs) in a 12 round WBC junior middleweight title eliminator in the co-feature.  This is an odd fight, as Attou, 37, was picked far down in the World Boxing Council’s rankings at #12. Normally with title eliminators, both fighters are ranked in the top 10 if not the top 5. The fact that the WBC is allowing Lubin, 23, to face  a lower ranked contender like Attou in a title eliminator, it’s even sporting. It’s a mismatch on paper.

Two years ago, Lubin suffered an embarrassing first round knockout loss to Jermell Charlo in 2017. Lubin lacked the experience to be there with a fighter in Charlo’s class at the time. He’s now matured a little n the last two years, so we’re going to soon see if he’s ready to avenge his loss.

Jermell will be facing WBC junior middleweight champion Tony Harrison in a rematch later this year. There’s a good chance that Jermell will beat Harrison this time to win back his WBC 154 lb title. If that happens, then a rematch between Lubin and Jermell will likely take place in 2020.  If Lubin hasn’t improved in the last three years since his last to Jermell, he’ll get stopped again.

Prediction: Lubin wins this fight by a first round knockout. Attou is woefully unprepared to fight a world class level fighter like Lubin, and he’s going to be exposed quickly tonight. This is such bad match-making.

Featherweight Eduardo Ramirez (22-1-3, 9 KO) will be fighting Claudio Marrero (23-3, 17 KO) in a WBA World featherweight title eliminator in the first match of tonight’s telecast on Showtime.

Ramirez, 26, lost to former International Boxing Federation 126 pound champion Lee Selby by  a one-sided 12 round unanimous decision two years ago in 2017 in a failed attempt to capture the IBF belt. Selby was too slick for Ramirez at the time, and it ended badly for the Mexican fighter. Since that fight, Ramirez has won his last two contests against Carlos Jacobo and Bryan De Gracia. Ramirez also has three draws on his record against Leduan Barthelemy, Mario Munoz and Jesus Quintero. When Ramirez steps it up in class, he tends to struggle. It’s going to be tough for him if he can’t raise his game to another level to beat the better fighters.

Marrero, 30, can punch, as his record would indicate with his 17 knockouts, and he’s going to be a problem for Ramirez. However, Marrero has lost two out of his last three fights against Jesus M Rojas and Tugstsogt Nyambayar, and he’s coming into tonight’s fight on a bad note.  Those are quality fighters, and there’s no shame in Marrero losing to them.  Marrero also has a loss on his record against former world champion Jesus Andres Cuellar in 2013. The difference in experience in this fight could prove to be a key factor. Marrero has fought much better opposition during his career than Ramirez.

Prediction: Ramirez will have too much youth for Marrero. This writer sees Ramirez winning this fight by a close 12 round unanimous decision. This should be the most competitive match on the televised portion of tonight’s Showtime card.