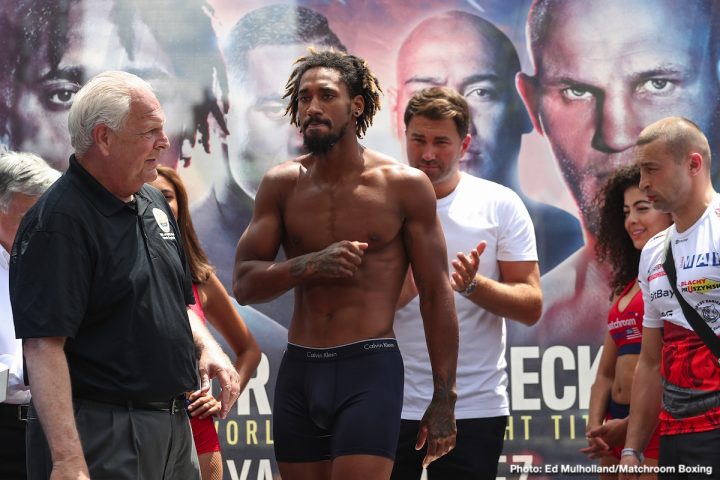 By Kenneth Friedman: Demetrius Andrade is faced with an opponent in Maciej Sulecki that will be coming to take his WBO middleweight title from him tonight in their fight live on DAZN at the Dunkin Donuts Center, Providence, Rhode Island.  Andrade, 31, has done a lot of talking in the last month, and now he’s going to have to back it up inside the ring against Sulecki.

Andrade (27-0, 17 KOs) is the favorite to win tonight, but that doesn’t mean anything. There’s a lot of uncertainties about this fight, because Andrade hasn’t fought an elite level fighter yet. Two years ago, Andrade barely bear Jack Culcay by a 12 round split decision, and that’s a fighter that Sulecki easily handled in 2017.

Sulecki could score an upset

Sulecki came close to beating Daniel Jacobs last year in April 2018 in losing by a 12 round unanimous decision in a fight that was a lot closer than the scores handed down by the judges. That’s the only loss on the Poland born Sulecki’s nine-year pro career, and it was a fight that he easily could have won.

A win for Sulecki tonight wouldn’t be a shock in the eyes of a lot of boxing fans, because they know how good he is. Andrade is an oustanding fighter, but he’s not mixed it at this level yet. Sulecki’s fighting style is similar to former South African heavyweight Gerrie Coetzee. Sulecki is not the fastest puncher in the middleweight, but his accuracy is excellent, and he has a high work rate.

Tonight’s Andrade vs. Sulecki fight comes down to these areas:

– Speed: Andrade has the better hand speed by a wide margin, but not by a wide margin. Sulecki has never been known as a blazing fast guy, but he makes up for it with the way returns fire so quickly after he’s hit.

– Power: This is another area in which Andrade has the advantage.

– Accuracy: Sulecki is the more of the two with the accuracy of his shots.

– Counter-punching ability: This area is even. Both fighters are excellent counter punchers. Sulecki’s willingness to take risks gives him the edge in this area.

– Ring IQ: There’s no difference between the two fighters in ring IQ.

Andrade’s reach will be a key factor

Andrade possesses the longer reach than Sulecki by five inches. However, both guys are the same height at 6’1″. Sulecki will stay in close, and that’ll make it tough on Andrade to keep him away. Andrade lacks the ring mobility to force Sulecki to stay on the outside for the entire fight.

Jermall Charlo vs. Demetrius Andrade unification fight would be huge

Andrade hasn’t said anything about wanting to face WBC middleweight champion Jermall Charlo in a unification fight, but it’s the easiest match that can be made right now between top fighters at 160. Charlo wants to unify the division, and he’s already said he would like to face Andrade. Saul Canelo Alvarez would have been an option for Charlo, but he’s been promoted to WBC Franchise middleweight champion. Gennady Golovkin hasn’t talked of wanting to fight Andrade, and he’s waiting on a trilogy match against Canelo.