Jermall Charlo: Canelo has to fight me sooner or later 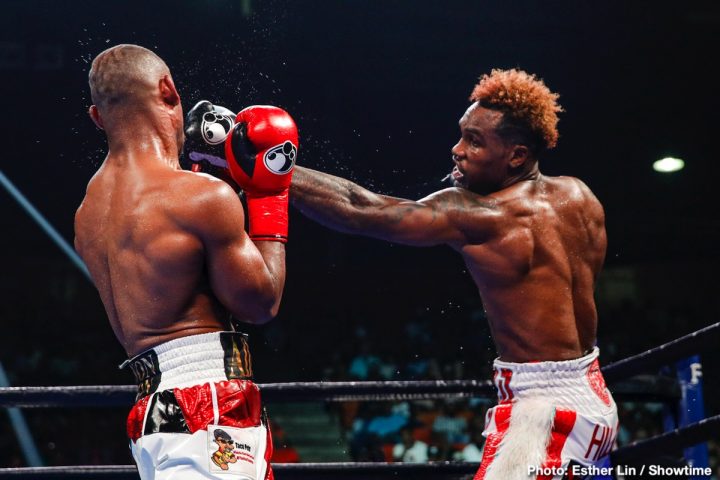 By Matt Aronson: Errol Spence Jr. spoke up at Jermall Charlo’s post-fight press conference last Saturday night in asking him what he needs to do in order to get Saul Canelo Alvarez to face him. Charlo beat Brandon Adams by a 12 round unanimous decision last Saturday night on Showtime, but he’s going to need to do better than that to raise his profile.

It almost looked like it was a planned move on Spence’s part for him to ask Charlo the question with all the media around to amplify the news around the boxing world.  Spence and Charlo are good friends, so it wasn’t surprising to see the question about Canelo being asked of him after his victory over Brandon Adams (21-3, 13 KOs) last Saturday night at the NRG Arena in Houston, Texas.

The question by Spence played well with the boxing media, but it doesn’t change anything. Charlo and Canelo fight on two different networks, and that effectively removes any possibility of them fighting each other. Canelo being appointed the WBC’s Franchise middleweight champion this week makes it even more unlikely he’ll fight Charlo.

Charlo beat Adams by a 12 round unanimous decision in a one-sided contest. The match was televised on Showtime World Championship Boxing.

It’s obvious what Charlo needs to do for him to get the Canelo fight. He’s got to increase his popularity with the boxing fans by fighting the best. Facing a bottom fringe contender like Brandon Adams is the wrong way for Charlo to increase his popularity. Charlo will need to be more assertive with his management to put him in with better opposition if he wants to take his career to the next level to get stars like Alvarez to fight him, but that my not happen. Charlo is a 10-year pro, and there’s been zero improvement in the quality of opposition for him. He’s now the WBC middleweight champion, but he’s never beaten any of the talented fighters at 154 and 160.  Charlo’s career has arguably been stunted by soft match-making.

Charlo is in a bad position to get a fight against Canelo, because he fights on a different network than him on Showtime with Premier Boxing Champions. Canelo Alvarez (52-1-2, 35 KOs) is signed with DAZN, and he recently inked a monstrous 11-fight, $365 million contract with them. They’re not paying Alvarez all that money to have him fight Charlo on Showtime.  It’s nothing personal, but Jermall is on the wrong side of the street for him to get a fight with the Golden Boy star Canelo right now. That could change when one of the two fighters’ existing contracts expire with their network, but that might not be for a while.

Charlo’s manager Al Haymon likely won’t give the green light for him to fight on DAZN to face Alvarez, and Canelo isn’t going to fight on Showtime. He’s being paid too much money by DAZN for him to go across the street to fight Charlo. That’s just the way it is.

What we saw from Charlo in his flawed performance in beating Adams last Saturday, his management at PBC probably isn’t going to let him anywhere near Canelo, Gennady Golovkin or Demetrius Andrade. Charlo is struggling with guys that he should be beating with ease, but he’s not for some reason. The hand excuse that Charlo is using for why he struggled against Adams looks like a weak attempt by him to explain away another poor performance. Before tonight’s fight, Charlo got all he could handle in his last contest against past his best 36-year-old Matt Korobov last December in Brooklyn, New York. A lot of boxing fans thought Jermall deserved to lose that fight. Whether you want to call it a win or not, what’s important is the fact that Charlo had problems against a fighter that the elite middleweights would likely easily beat.

Charlo has a lot of competition in vying for a match with Saul Alvarez. You hate to say it, but Jermall is in the back of the line in trying to get a fight with Canelo. The Mexican star has these fighters seemingly ahead of Charlo: Sergey Kovalev, Gennady Golovkin, Callum Smith, Demetrius Andrade and Jaime Munguia. Those would all be big fights for Canelo right now against guys that are well known by the casual boxing fans in the U.S. Charlo still isn’t known well enough for fans to make a fuss in a fight between him and Canelo, and that makes him not worthwhile for the Golden Boy star to fight. Additionally, when you factor in that Charlo compete on a different network than Canelo, it makes a match between them all but impossible.

Charlo says Canelo has got to fight me sooner or later

Jermall shouldn’t hold his breath waiting on Canelo to fight him, because he’s got an endless supply of fighters that he can battle on DAZN, and he doesn’t need to ever cross the pond to face him. Charlo should worry about carving his own legacy the way Canelo did by continually winning, looking good, and pushing his management to match him against the best guys as possible. It would help immensely if Charlo were willing to fight guys at 154, 168 and 175.

A good move for Charlo would be for him to branch out to the other weight classes in the same way that Canelo is doing in order to expand the possible options for him to fight. Just staying at middleweight will limit the amount of guys available to him. If Charlo can’t fight the DAZN guys like GGG, Canelo and Demetrius Andrade, then he’s got to consider moving up or down in weight to go after the fighters that are able to fight him.

Charlo beat Adams by a 12 round unanimous decision by the scores 120-108, 120-108 and 119-109. The outcome was never in question for Charlo, but he never came close to knocking Adams out. It looks bad that Charlo, 29, couldn’t knockout a fighter that was stopped in two rounds by John Thompson in 2015. Jermall tried hard to KO Adams, but he couldn’t put enough of his shots together in a row for him to hurt him badly. Adams wasn’t hit a lot due to his movement. Unlike some of Charlo’s past opponents, Adams didn’t stand in front of him foolishly to let him get his shots off. If Charlo requires that his opponents stand immobile for him to KO them, then he’s not going to score too many more knockouts during his career. Most of Charlo’s knockouts on his resume came earlier in his career when he was facing woeful 2nd and 3rd tier opposition.

Adams fought smart against Charlo by coming in to land, and then darting away to the outside to avoid getting hit. It was the only way that the tiny 5’9″ Adams could fight against an opponent that had him out-sized by a wide margin. Charlo is 6’0″, and he had the size, reach and power advantage over Adams.  Had Adams stayed in the pocket all night long, he would have been knocked out, because he didn’t have the power or the physical tools to match-up with Charlo. This fight was a planned mismatch from the get go. Adams was picked out by Charlo’s management from low in the World Boxing Council’s rankings at #12.

Brandon was never meant to be a serious challenger. The fact that he was able to go the distance with Charlo shows intelligence, and his ability to stick with the game plan his training team put together for him. After the fight, Adams admitted that he had lot to the better man, but he vowed to learn from the mistakes he made in the fight to come back better in his next fight. You have to believe Adams will do that.

Jermall stopped using his left hand for throwing power shots after the second round after hurting it, but that wasn’t the reason why he couldn’t stop Adams. He wasn’t doing any damage with his left hand before the injury, because he didn’t have a stationary target to land his shots. The injury didn’t change the outcome of the fight, since Charlo’s feet were too slow for him to get to Adams. If Charlo wants to go back to scoring knockouts again, he’ll need to convince his management to start matching him against fighters that stand still in front of him like before. Unfortunately, at the upper levels of the middleweight division, the fighters are smart, and they don’t just stand in one place to allow their bigger opponents to steamroll them.

We’ll soon see whether Charlo will be able to return to the ring quickly or not after injuring his hand. He might say that he’ll be getting back into the ring soon, but that’s not going to happen if he has a broken hand or some other injury. Charlo is too valuable to be allowed to fight with a hand injury.

Boxing » Canelo Alvarez » Jermall Charlo: Canelo has to fight me sooner or later