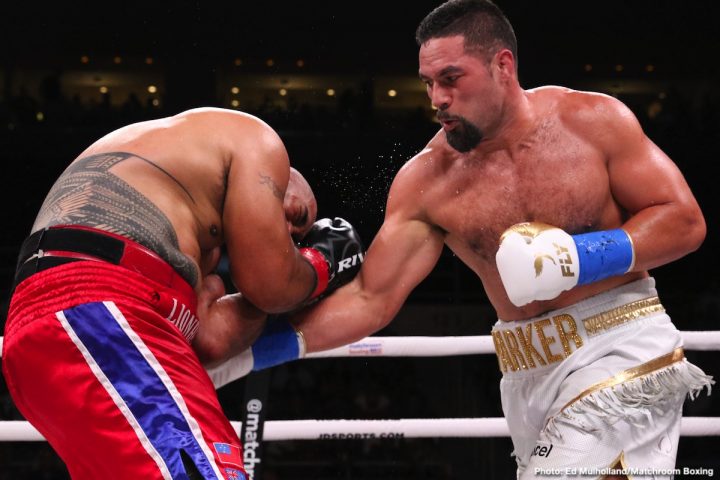 Leapai replaced former two time world title challenger Eric Molina as Parker’s opponent after he got injured and had to pull out.

It took the 27-year-old Parker 10 rounds of continuous battering of Leapai (32-8-4, 26 KOs) before referee Ricky Gonzalez stepped in and stopped the fight in the 10th round. It was an ugly fight to watch, because it was match that arguably shouldn’t have been made. Putting a prime heavyweight contender in with an over-the-hill guy like Leapai was a highly questionable move by Matchroom. The promotional company has a large number of heavyweights that they could have matched against Parker rather than Leapai.

This was Parker’s first fight with his new promoters at Matchroom Boxing USA, but he didn’t perform well. Parker came into the fight having lost 2 out of his last 3 contests. His promoter Eddie Hearn put him in with a guy that he was supposed to beat easily, and look good in a showcase/confidence booster type of fight, but that failed to happen.

Instead, Parker (26-2, 20 KOs) looked sluggish after emptying his tank in the first round trying to score a quick knockout of Leapai. Former world title challenger Leapai offered up no resistance at all. It was disturbing to watch the fight because it was so one-sided. You can argue that the referee should have stopped the contest early on. The crowd at ringside looked uncomfortable at watching Parker hit Leapai at will with shots with him scarcely throwing anything back. Leapai. At best, Leapai was throwing roughly two punches per round, and they were wild swings that Parker easily dodged. Leapai did nail Parker with a few shots, but mostly he missed badly.

After the fight, Parker made it clear that he wants to fight Anthony Joshua, Dillian Whyte and Andy Ruiz Jr. His promoter Hearn says he’s interested in matching him against the winner of next month’s July 20th fight between Dereck Chisora and Artur Szpilka. The winner of that fight is the most likely opponent for Parker to face next.

Former WBO heavyweight champion Parker will obviously get a shot at Whyte and/or Joshua if he can keep winning long enough. Despite having lost 2 out of his last 4 fights, Parker is still ranked high in the top 15. Hearn is going to need guys to put in with Joshua and Whyte. It’s better for Hearn and Matchroom if he can put his own fighters like Parker in with Whyte and Joshua than if he has to use outside guys. We saw how that backfired on Heard when made the mistake of matching Joshua against Andy Ruiz Jr. earlier this month in New York.

Chisora vs. Szpilka winner to face Parker next

Former heavyweight world title challenger Chisora (30-9, 21 KOs) is more of a journeyman at this point in his career. Technically, Chisora is still a contender, but he has so many defeats on his record that it’s impossible to view him as anything other than a journeyman. Chisora is a step up from Leapai, but not a big one. Szpilka is arguably on the same level as Leapai due to his poor punch resistance.

Hearn would do better to put Parker in with a higher level heavyweight than Chisora or Szpilka, but if he did that, he might lose again. If Hearn wanted to, he could match Parker against Michael Hunter or Filip Hrgovic. Those would be good opponents for Parker to fight in a 50-50 type of match-up, but it looks like Hearn is more interested in putting him in fights that he has a good chance of winning.