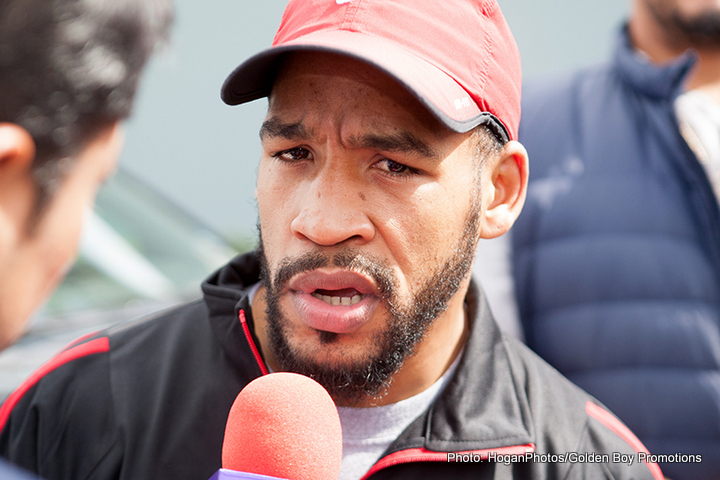 By Jeff Aranow: James Kirkland will be making his long awaited comeback on August 24 in a six round fight against journeyman Colby Courter (13-14, 10 KOs) at the Erwin Center, in Austin, Texas. A lot of fans will be eager to see Kirkland back inside the ring, because he had a large following during his career.

The 35-old Kirkland is coming back to try and give boxing another shot after getting blown out in his memorable fight against Saul Canelo Alvarez in 2015.

Kirkland coming off a four-year layoff

This will be the first fight back for Kirkland in four long years, and it’s going to be tough for him to try an get back his skills. Before Kirkland’s last fight against Canelo in 2015, he’d been out of action since 2013.

Kirkland was brought in as an opponent for Canelo to shine against, and he certainly did that. It was a complete blowout with Canelo destroying Kirkland in three rounds.

There’s no word at what weight the Kirkland-Courter fight will take place at. One big hint is the fact that Courter fights at 168. Kirkland has fought most of his career at 154, so it could be a little bit of an adjustment for him to be fighting a super middleweight.

You can’t blame Kirkland if he can longer get back down to 154, because it’s been so many years. Kirkland has fought just once in the last six years. There aren’t too many boxers that are going to be able to come back successfully after being out of the ring for that long of a period. But if this all about Kirkland looking to get another big money fight like he got in his match against Canelo, then it won’t matter.

It’ll just be a case of Kirkland taking soft fights until one of the big names takes interest in fighting him. Hopefully we don’t see Kirkland disappear for another four years if/when he loses that fight.

Courter (13-14, 10 KOs) has lost eight out of his last ten fights since 2013. You’d have to say that Kirkland’s chances of winning are high, as long as he doesn’t get hit hard by anything. Kirkland’s punch resistance has never been good.

Kirkland was knocked out in the first round by the light hitting Nobuhiro Ishida in April 2011. That was a fight that Kirkland was supposed to win without any problems, but everything went wrong for him.

Ishida dropped Kirkland three times before the referee Joe Cortez was forced to step in and stop the slaughter. Not long after that, Ishida was beaten in three consecutive fights by Paul Williams, Dmitry Pirog and Gennady Golovkin.

What’s the goal for Kirkland’s comeback

It would be interesting to know what the ultimate goal is for Kirkland and his management for his comeback. Is Kirkland looking to get another big money fight against a star like Canelo Alvarez or is he aiming a little lower for a match against GGG?

At this point it’s highly unlikely that Kirkland will be able to lure either of those two to face him. Kirkland has performed so poorly in his high profile fights during his career.

It would require Kirkland to do a massive amount of rebuilding for him to be considered viable opponent for any of the top fighters in the 160 or 168 pound divisions right now. They’re probably not going to pick Kirkland based on his name recognition with the casual boxing fans, because it’s been such a long time since he fought.

The only people that remember who Kirkland is would be the hardcore boxing fans, and they already saw him get blown out by Ishida and Canelo.

Kirkland’s punching power will give him a chance to thrive

Kirkland possesses a lot of punching power, but his ability to take a good shot leaves a lot to be desired. He falls apart when he gets hit hard. That’s a problem that likely hasn’t improved during the four years that Kirkland has been out of the ring.

If Kirkland can boil down to 154, he might have a shot at making some waves if he fights the right guys. He should probably stay away from the likes of Jermell Charlo, Jarrett Hurd and Erislandy Lara. Kirkland would stand a better chance against the likes of Tony Harrison and Jaime Munguia.

Kirkland would be a good opponent for someone like Amir Khan if the two could agree on a weight. It would be pure drama to see those two swinging for the fences. Aside from that, it’s really hard to imagine Kirkland’s comeback being a successful one. He’s obviously coming back for a reason. He made a lot of money in his fight against Canelo Alvarez in 2015.

Whether Kirkland has spent all the money is the big question. In hindsight, Kirkland should have come back a lot sooner, because he was in demand still. Miguel Cotto was interested in fighting him, but he suffered an injury training for the fight and had to drop out. It would have been good had Kirkland came back in 2016 to try and put some wins together. He would be a lot further along if he had continued to fight.