Fury vs. Schwarz: What if Tyson loses? 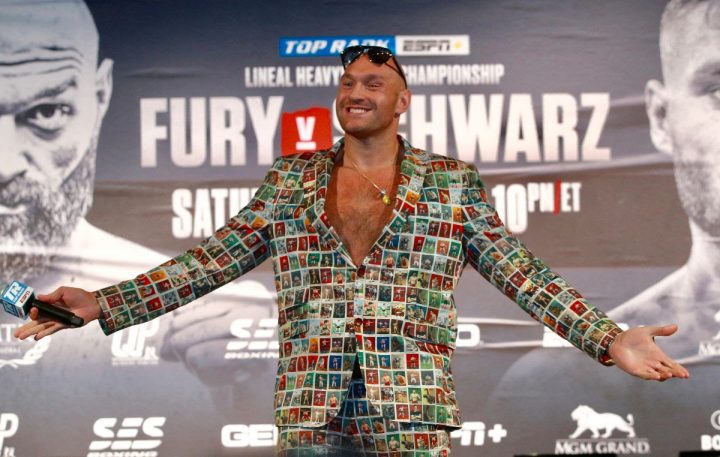 By Tim Royner: Tyson Fury is a huge favorite to win tonight against unbeaten Tom Schwarz, but there’s a chance that we could see an upset in this fight at the MGM Grand Garden in New York. Fury (27-0-1, 19 KOs) has let himself go physically a little from the excellent conditioning that he had in his previous fight against WBC heavyweight champion Deontay Wilder.

Fury might have been gorging on one too many delicacies from the local pastry shop in the last six months since the Wilder fight. Fury’s weakness is he tends to reward himself with food after a big fight, and he blows up in weight. We all saw how Fury ballooned up to close to 400 pounds after he beat Wladimir Klitschko in 2015.

It took Fury ages to burn the weight off, and he never did take it all off. He was supposed to be continuing to lose weight after the Wilder fight to get back down to the mid-240s, which is what he weighed when he fought Wladimir three years ago. Instead of doing that, Fury has packed on seven pounds of extra fat in going from 256 to 263 pounds, and he now has a little pot belly. What a mistake. That’s the problem with fighters that like to eat. They soon eat themselves out of a career, and wind up retiring. Guys like Ricky Hatton, Riddick Bowe and Fernando Vargas might have had longer careers if they had stayed trim in between fights.

A bad knockout loss for Fury tonight could be ruinous for his career, because of the level of his opponent. This would be much worse for Fury than Anthony Joshua’s recent defeat at the hands of Andy Ruiz Jr. on June 1. Losing to an Olympian like Ruiz is nothing for Joshua to be ashamed of, since that was a high quality fighter that he was in there with. In contrast, Schwarz isn’t viewed in the same light as Ruiz. He doesn’t have that pedigree that Ruiz Jr. possesses. If Fury loses a decision to Schwarz, and it won’t be as bad as it would if he gets knocked cold by him. If Fury gets knocked out, boxing fans will immediately point to Wilder’s 12th round knockdown of Fury as the catalyst that led to Schwarz’s stoppage win.

Where does Fury go if he loses tonight?

For starters, Fury will miss out on a rematch with Deontay Wilder if he gets beaten tonight. Secondly, Fury won’t get the dream fight with Joshua. Yeah, Fury and AJ will fight each eventually, but it won’t be until both guys are rebuilt. Joshua is about to put his career permanently on the skids when he faces Ruiz later this year in a rematch. Another knockout win for Ruiz is going to have Joshua thinking long and hard about whether it’s worth it for him to continue fighting.

Fury’s promoters at Top Rank Boxing will want to rebuild him after a defeat to Schwarz. Depending on how badly Fury loses, Top Rank could put him back in with Schwarz. This is the type of fight that would be difficult for Fury walk away from if he were to lose, as you would guess. Top Rank might want to steer Fury into safer waters after a loss to Schwarz, but how much safer can you get than this? If Fury can’t beat this level of opponent, then where do you go?

Fury is already hand-picking a soft fighter. If he can’t beat a guy at this level, then he doesn’t belong fighting Ruiz Jr., Wilder or Anthony Joshua. Top Rank would need to bite the bullet, grit their teeth and put Fury back in with Schwarz and hope for the best. If Fury loses the rematch, then the only thing Top Rank could do is cut their losses and move on. One would assume Top Rank has a safety valve in their contract with Fury where they can go their separate ways if he starts losing left and right.

Although Fury and his trainer Ben Davison says that he’s in better shape for this fight, Fury’s fat-looking midsection suggests otherwise. Unless Fury put that fat on in the last couple of weeks, he’s not been concentrating hard enough on his diet and his cardio to burn off the fat.

Schwarz: I have a chance

“It sounds stupid all the time talking about an underdog and saying he has no chance,” Schwarz said. “Let me repeat it: Yeah, I have a chance. That’s the reason I’ve taken this fight. My life is boxing. I’ve done all of this to get to this moment on Saturday, and I will show everybody it’s possible to beat this guy.”

Fury’s chin is a question mark now after the way Wilder knocked him down twice. The knockdown that Fury suffered in the 12th round by Wilder may have shaken something loose in his head, making him susceptible to future knockouts. We’re going to see tonight if Fury can still take a shot without dropping flat on his back again. It might just take a moderately hard right hand from Schwarz to do the job that Wilder started on him. It’ll be a different referee working tonight than the one that worked the Wilder-Fury fight. That could mean that if gets knocked out again like he was by Wilder, the referee will actually do the logical thing by stopping the fight instead of standing until Fury wakes up.

It’s smart of Top Rank Boxing to realize that Fury needs a break from taking heavy shots to the head after the way Wilder poleaxed him last December. However, they may not have found a fighter that is fully safe for him. Schwarz has decent right hand punching power. He’s not the hugest puncher in the world, but may have enough power to finish the job on Fury.

As we’ve seen in Fury’s three fights of his comeback, his game is based on movement, and perching against the ropes to let his weary legs take a rest. The three years that Fury has been out of the ring hasn’t done him any favors in the stamina department. Fury can’t move around like he used to. If he’s unable to get a knockout, he gets tired late in his fights.

Fury can possibly come back from a loss to Schwarz

It won’t be the end of the world for Fury if he loses tonight to Schwarz. He would just need to dump his trainer Davison, find a quality guy to coach him, and maybe go off into the wilderness to train the way Gennady Golovkin does. If Fury can get to a place where his food is constantly monitored, he could get back down to the 240s, and do well.

Sergey Kovalev and Anthony Yarde have agreed to terms »