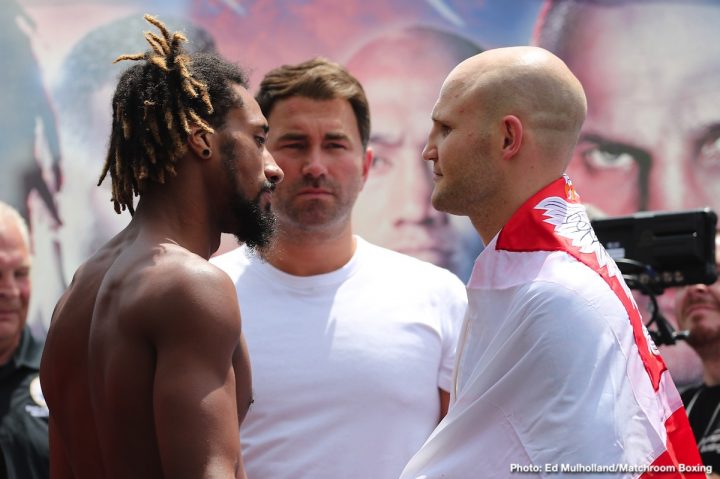 By Mark Eisner: Demetrius Andrade weighed in at 159.9 pounds on Friday afternoon for his title defense of his WBO middleweight crown against Maciej Sulecki this Saturday night on DAZN from the Dunkin Donuts Center in Providence, Rhode Island. Sulecki (28-1, 11 KOs) weighed in at 159.5 pounds. Both fighters looked in good shape, and not weight drained the way some guys are.

Andrade vs. Sulecki winner could face Canelo or GGG next

There’s a lot on the line for this match-up. The winner of the Andrade-Sulecki fight will stay in the running to face Saul Canelo Alvarez or Gennady Golovkin. Matchroom Boxing promoter Eddie Hearn believes Sulecki will get a fight with Canelo or GGG if he wins.

“I think they highly regarded Demetrius Andrade in the boxing community, and I do believe Andrade is a special fighter, but he’s never been tested yet,” said Hearn to Fight News in talking about why Andrade is the favorite over Sulecki. “That’s the thing about this fight. We’re going to find out how good Demetrius is, because Maciej has so much heart, and so much energy. He has so much belief. If Demetrius Andrade isn’t a special fighter, he’s going to lose on Saturday night.

The 2008 U.S Olympian Andrade, 31, is a good fighter, but he’s not shown himself to be an amazing talent despite sporting a still unbeaten 27-0 record. Andrade squeaked by Jack Culcay in beating him by a 12 round split decision two years in March 2017, and he struggled in beating Vanes Martirosyan in 2013. Demetrius won that fight by a 12 round split decision. Those are easily best names on Andrade’s 10-year resume.

Hearn: Sulecki will get Canelo or GGG if he beats Andrade

“I think the perception is he [Andrade] is the pound-for-pound fighter, and if he is, he’s rightfully a big favorite to win on Saturday,” said Hearn. “But is he? That’s what we need to know. I know Maciej well enough. Look at the fights he’s been in: Daniel Jacobs and Gabriel Rosado. He’s always in brilliant fights. He’s an excellent world class middleweight, and you’re going to see a great fight on Saturday. If Maciej wins on Saturday, I believe his next fight will be against Canelo or GGG,” said Hearn.

This is a tough fight to predict. Sulecki, 30, has the size, aggression and work rate to beat Andrade on Saturday night. All Sulecki has got to do is take the fight to Andrade the way that Culcay and Martirosyan did in their fights against the Rhode Island native.   For Sulecki to win, he’ll need to be able to take some big shots from the southpaw Andrade, because he’s a respectable puncher. Sulecki faded in his fights with Daniel Jacobs, and Gabriel Rosado. He still fought well in both of them. Sulecki came close to beating Jacobs last year in April in losing a 12 round unanimous decision. Jacobs is arguably a better fighter than Andrade, so that tells you what kind of talent Sulecki is.

Prediction:  This is a real toss up fight, as both guy are so evenly matched. They share a common opponent in Jack Culcay. Sulecki did a better job of beating Culcay than Andrade. For that reason, this writer is picking Sulecki to win the fight by a 12 round split decision. Andrade is the A-side here, so we may see a controversial decision. Hearn is pushing Andrade hard to try and lure Canelo Alvarez and Golovkin to fight him. The only thing that Andrade has going for him is his WBO middleweight title though, and only Canelo cares about that.

WBA super flyweight champion Kal Yafai (25-0, 15 KOs) weighed in at 114.5 pounds for his title defense against #1 contender Norbelto Jimenez (29-8-4, 16 KOs). The highly ranked Jimenez also weighed in at 114.5 pounds. Jimenez has won his last nine fights since 2014. Don’t be surprised if we see an upset in this fight. Of course, we could also see Yafai winning by a controversial decision.

Yafai looked terrible in his last fight in beating challenger Israel Gonzalez by a 12 round unanimous decision last November in Monte Carlo. Yafai won by the scores 117-111, 116-112 and 116-112. Boxing News 24 had Gonzalez winning by a 117-111 score. The scoring for the fight was embarrassingly bad, as Yafai was seen as the lower by the fans booed loudly after the scores were announced. Yafai is one of Hearn’s fighters.

Prediction: Yafai will win a competitive 12 round unanimous decision. He’s not a big enough puncher to knockout Jimenez, and it’s doubtful he’ll put himself in the line of fire to try and score a stoppage. It’s too risky.

Former WBO heavyweight champion Joseph Parker weighed in at 241.5 pounds for his 12 round fight against former world title challenger Alex Leapai. The 39-year-old Leapai (37-7-4, 26 KOs) weighed in at 254.2 pounds. This is the first fight for Parker (25-2, 19 KOs) with his new promoters at Matchroom Boxing USA, and he’s hoping to look impressive against Leapai. Parker, 27, wants to fight the winner of the Anthony Joshua vs. Andy Ruiz Jr. rematch, and he figures he has a good chance of doing that. He’s fought both guys, and lost to Joshua and beaten Ruiz, albeit a controversial decision. Ruiz said recently that he wants to fight Parker again, but he didn’t say when.

Prediction: Parker will win this fight easily by early knockout. Leapai is old, slow, and not nearly the same kind of talent that Parker is. 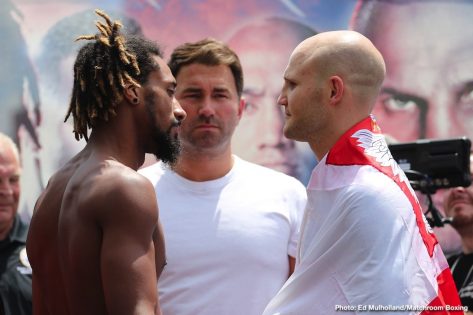 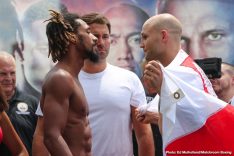 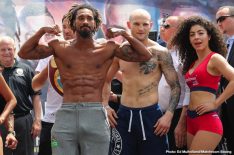 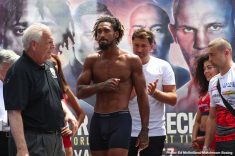 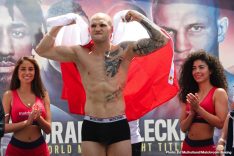 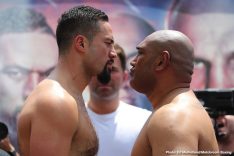 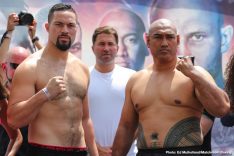 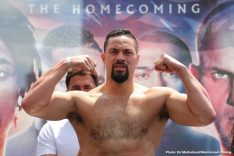 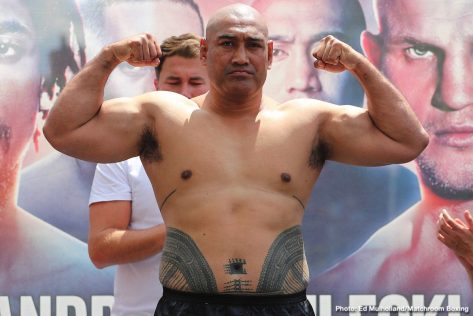 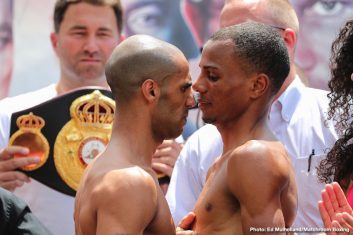 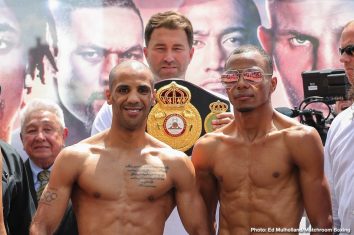 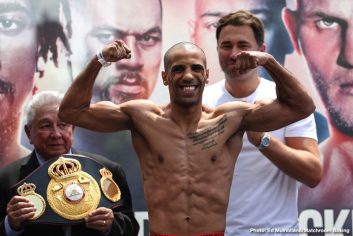 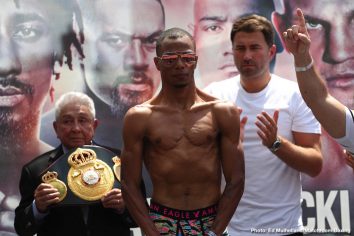