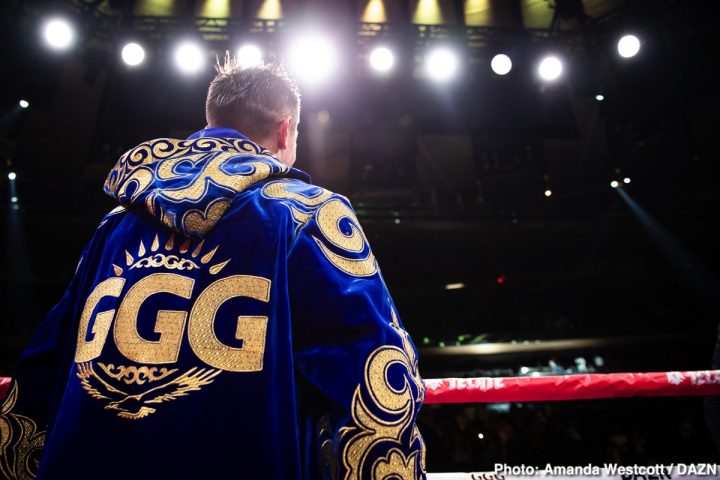 By Barry Holbrook: With his tune-up fight against Steve Rolls safely out of the way, Gennady Golovkin has turned his sights towards Saul Canelo Alvarez for his next match in September. Unfortunately, the bad news is the Canelo vs. GGG fight is in jeopardy for September, according to Chris Mannix of Sports Illustrated.

There are issues that will need to be agreed on by this Friday, otherwise Golden Boy Promotions and Canelo will move on and look in another direction for the September fight. The major problem that has led to the impasse is the location of the Canelo-GGG trilogy fight. Golovkin wants it in New York or Texas, whereas Canelo prefers it take place Las Vegas, Nevada.

It’s obviously in Canelo and Golovkin’s best interest for them to hammer out a deal for them to fight each other in September, but if the two are unable to agree on a location for it, then that could spoil things.

Golovkin reportedly wants the third fight to be staged in New York or Texas, as he’s come up empty in his two previous matches against Alvarez in Las Vegas, Nevada. However, Canelo wishes to return to Las Vegas for the third fight, and he’s the one that is in the position of power in having won the second match between them. Canelo is also the more popular of the two fighters. GGG feels that he should have won the first two fights that took place in Vegas, but the judges weren’t impressed enough to give him the decisions.

As far as Alvarez is concerned, he closed the chapter on his Golovkin rivalry by beating him last September in their rematch. After that fight, Canelo no reason to bother with GGG any further unless he won another world title for him to give him a third fight. Canelo and his promoters at Golden Boy made it quite clear to Golovkin that he needed to win another world title if he wanted a third fight.

Rather than following what Canelo asked him to do, Golovkin chose little known fringe contender #15 WBC Steve Rolls this month on June 8 in New York. Canelo and Golden Boy didn’t request that GGG win a world title to embarrass him. They obviously wanted to build up the third fight to make it bigger. They couldn’t do that if Golovkin came into the fight off the back of a mismatch against a mediocre opponent like Rolls. They needed Golovkin to beat a world champion, and that would help make the third fight huge. Golovkin chose not to fight a champion, and that was a mistake on his part.

“For me, [the GGG rivalry] is done,” Canelo said after his win over Daniel Jacobs last May. “But if people want another fight, we’ll do it again and I’ll beat him again.”

Unfortunately for Team GGG, the boxing public isn’t demanding the third fight between Canelo and Golovkin like they had done for the second match. The fans are tired of that rivalry, which has failed to live up to expectations. Neither fight was great to watch, and the controversy from the scoring has become tiresome.

Not only did GGG not fight a world champion to win a title for Canelo, he picked the lowest ranked contender in the World Boxing Council’s top 15 ranking. The decision for GGG to fight Rolls instead of one of the world champions or a highly ranked contender came across to some like Golovkin believed he would get the trilogy fight with Canelo no matter what. DAZN want the trilogy fight between Canelo and GGG, therefore Golovkin might have been assuming that he didn’t have to win a world title in order to get the trilogy match with the Mexican star. Unfortunately, Golovkin’s decision to fight Rolls may have hurt his chances of fighting Canelo a third time.

In looking at both fights, Canelo appeared to outsmart Golovkin by using basic movement, and coming forward. GGG didn’t react well in either of the two contests.

In the first fight, Golovkin stayed on the outside, jabbing, and looking like he was afraid to get in close to turn it into the brawling style that he’d promised. GGG should have been able to cut off the ring on Canelo, but he looked slow on his feet and incapable of doing that. The judges responded by scoring the fight a draw. In the second Canelo-Golovkin fight last September, Canelo pressured GGG, and had him backing up most of the fight. It looked like a clear win for Canelo at the end despite the fact that he faded a little in the middle rounds.

Golovkin not in a strong position to negotiate with Canelo

GGG is in a weakened position to make demands in the negotiations for the third Canelo fight. Golovkin isn’t a world champion, and he’s coming off of a poor performance against the little known Rolls. It was a major mistake on Golovkin and his management’s part not to realize that they absolutely needed to fight one of the world champions to win a world title to use as bait to get Canelo to agree to a third fight. As such, Golovkin has nothing that Canelo wants. Canelo can make money fighting Andrade, Callum Smith or Sergey Kovalev. Many of the fan are tired of seeing Golovkin and Canelo fight each other.

They would be more than happy to see Canelo bring in some new blood like Andrade or Callum. If Canelo negotiates a fight with Andrade, Golovkin will need to win a world title from one of the super middleweights like Billy Joe Saunders [WBO], Andrew Dirrell [WBC], Caleb Plant [IBF] or Callum Smith. If Golovkin chooses to continue to fight fringe contenders ranked at the bottom of the middleweight division like he did against Steve Rolls, then he could be in for a long, long wait as far as a trilogy fight against Canelo.

Canelo and his promoters at Golden Boy Promotions haven’t yet said whether they’ll give GGG the fight that he’s asking for.

Former IBF/WBA/WBC middleweight champion Golovkin and his promoter Tom Loeffler haven’t yet discussed openly who they will be looking to use as a Back-up plan-B option if they’re unable to get Canelo to agree to fight take the trilogy fight in September.

Canelo’s other options for his September fight is a unification match against WBO middleweight champion Demetrius Andrade or WBA Super World World super middleweight champion Callum Smith. Those are two excellent fights for Canelo. Smith is considered the #1 fighter in the 168 pound division today, and Canelo would receive a lot of credit if he were to beat him. Andrade (27-0, 17 KOs) holds the WBO 160 pound title, and that’s the last remaining belt that Canelo needs for him to unify the middleweight division.

GGG already ruling out top fighters for next bout

It’s a bad sign at the post-fight news conference that Gennady ruled out fights against Demetrius Andrade, Jermall Charlo and Daniel Jacobs. If you take those guys away, it leaves GGG very few options if Canelo chooses not to fight him in September.

“You’re talking about fighters that are already passed them. There are a lot of new fighters, very highly rated fighters, let’s talk about them,” said Golovkin when questioned if he’d like to fight Daniel Jacobs or Demetrius Andrade if he can’t get trilogy fight against Canelo in September. “I already answered the question. The young undefeated fighters should be the priority, not to come back to fighters we already know,” said GGG.

Canelo and Golovkin both recently signed big contracts with DAZN, and there’s a lot of interest by that company in them facing each other in September. A third fight between them would bring in a large amount of subscribers that they need and want. Alvarez recently signed a huge $365 million deal for five years and 11 fights. Canelo has already fought twice for DAZN against Rocky Fielding and Daniel Jacobs. The Fielding fight was a throwaway contest in Canelo staying busy to win an easy world title at 168.

The Jacobs match was the serious one, and Canelo did just enough to edge it to become a three division world champion. GGG followed Canelo over to DAZN, and signed a six-fight deal for nine figures. Golovkin’s first fight of his contract was a lackluster one against 35-year-old Rolls, and it wasn’t well received by the boxing public. In hindsight, DAZN should have rejected that fight, because few fans cared about seeing it.

Negotiations for Canelo vs. GGG hit a snag »