Negotiations for Canelo vs. GGG hit a snag 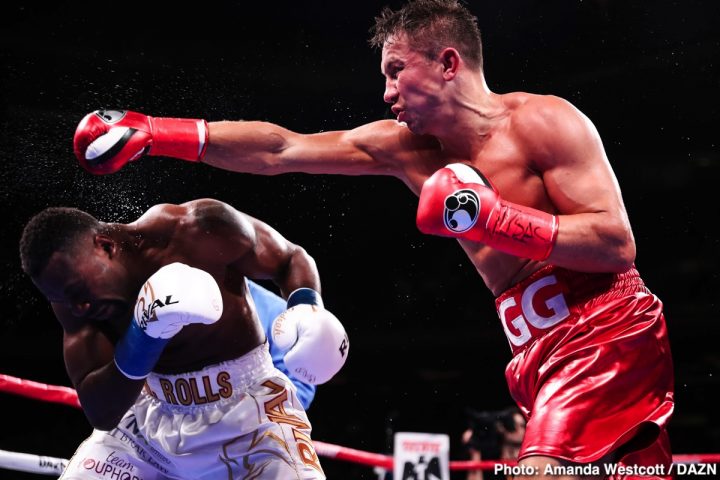 By Aragon Garcia: Gennady Golovkin is insisting on his trilogy fight with Saul Canelo Alvarez being staged outside of Las Vegas, Nevada, says a source for Sports Illustrated writer Chris Mannix. It boils down to Golovkin not wanting to fight the trilogy with Canelo in Vegas, but that’s where Golden Boy Promotions want the fight.

Canelo is the A-side

Canelo has plenty of takers besides Golovkin for September, and those fights would bring in massive subscribers for DAZN. Canelo can face Andrade in September, and perhaps Golovkin will change his mind about not wanting to fight Las Vegas after that. It might be a good idea for Canelo to give Golovkin time to think.

Canelo vs. GGG negotiation roadblock could be resolved with DAZN’s help

DAZN will probably step in and attempt to resolve the obstacle to getting the Canelo vs. Golovkin fight negotiated. They want this fight, as does Golovkin. Superstar Canelo can take it or leave it at this point, because he’s got a lot of other things he wants to do with his career rather than get stuck fighting Golovkin three to five more times.

There are other things that Canelo wants to accomplish with his career. Fighting GGG is keeping Canelo stuck in the past, fighting a guy that isn’t showing signs of improving, and doesn’t seem to learn from his mistakes.

What has to be annoying for Canelo is having to hear complaining afterwards about the scoring after his matches with GGG. Canelo isn’t the type that grumbles after his fights. When he lost to Floyd Mayweather Jr., he’s didn’t complain about the scoring. He admitted that he lost, and learned from it.

Nothing for Canelo to gain in fighting GGG again

Now that Alvarez has already beaten GGG, he stands to gain very little in beating him again. There’s no upside for Canelo fighting GGG once more. He’s already shown that Golovkin can’t adapt, and is rather one-paced. Golovkin lacks the other gear that he needs for him to do well against a fighter like Canelo.

If Canelo wins again, there’s a chance there will be complaining from boxing fans about the scoring. Whether Golovkin admit that he lost the fight will be interesting to see. Will GGG and his promoter say they should have won or will they give Canelo credit for his victory. Sometimes fighters have to bite the bullet and admit that they just weren’t good enough.

Canelo’s legacy would go through the roof if he beats Sergey Kovalev, Demetrius Andrade and Callum Smith. Those are three fights that Canelo is interested in. If Canelo uses up his career fighting GGG repeatedly for the next two or three, it would be a pity.

The Canelo-GGG trilogy fight arguably has the best chance of making the most money in Las Vegas. There’s no state tax, and it’s an area where Canelo has a massive amount of fans in the city, state and nearby California.

GGG wants the trilogy fight with Alvarez in Texas or New York. Cooler heads will need to prevail in the negotiations. While Golovkin might feel it’s important for him to fight outside of Las Vegas, but he might need to look at it from a dollars and cents approach.

The fight needs to take place where it has the best chance of making the most money, period. If that’s Las Vegas, then Golovkin might have to swallow his pride and take the fight there if wants to face Canelo again.

There’s an imbalance between the interest in this between the two stars. Canelo is indifferent about fighting Golovkin again, and for good reason. He already beat him, and some think he did it twice. It’s Golovkin that is pushing hard for the fight with Canelo, and almost hounding him to try and get the trilogy match.

If he doesn’t feel comfortable with the judges in Las Vegas, GGG can make money fighting other guys. He doesn’t have fight Canelo again. No one is forcing Golovkin to fight Canelo.

Some fans think Golovkin is just looking to cash out by getting as many Canelo fights a he can in the last five fights of his contract with DAZN. It’ll be interesting to see if DAZN looks to pressure Canelo to fight two or three more times with the remaining nine fights that he has on his original 11-fight contract. It’s a win-win for GGG if Canelo ends up fighting him two or three more times, but it won’t do anything for Canelo.

Golovkin looked so poor in his last fight against Canadian Steve Rolls this month. GGG was getting hit repeatedly by an old guy that few fans had ever heard of. Canelo would have been a nightmare for a wide open fighter like Rolls. Golovkin didn’t show the kind of boxing skills or the style that his new trainer Johnathon Banks had been talking about going into that fight.

Banks wanted Golovkin to throw sustained combinations, move his head, and not let Rolls breathe. We saw none of that from GGG. He was slow, didn’t move his head, and attacked with the same single shots that he’d done his entire career.

Golovkin looked worse than he had in his two fights with Canelo. On the positive side, GGG’s physique looked a lot leaner than it had in ages, and he appeared to have worked hard on that at least. Overall, it wasn’t the kind of performance that suggests that the trilogy fight with Canelo would be any different than the first two matches between them. Canelo has learned and improved, whereas Golovkin has gotten older, and learned nothing.