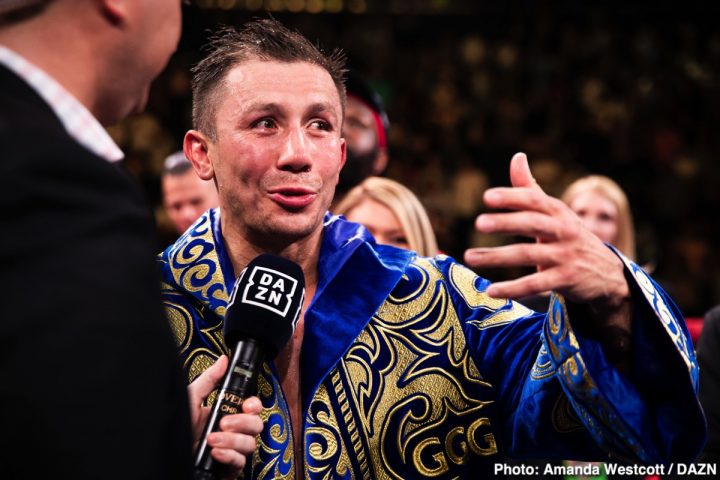 By Darren Paradise: Thousands of British boxing fans were left seething this past Saturday night when it became apparent that there would be no TV coverage of Gennady “GGG” Golovkin’s return to the ring against Canada’s undefeated Steve Rolls.

Disappointed Brits had been under the impression that all fighters signed up to the DAZN platform would be screened live on Sky Sports courtesy of the $1billion deal between DAZN and Eddie Hearn’s Matchroom Boxing. UK fight fans must now be wondering where they stand in respect of future events.

It has now become apparent that any fighters who are signed up to DAZN will NOT be featured in the UK unless they are either directly promoted by Matchroom or there is a Matchroom promoted fighter in the opposite corner. For example:

This leads me to believe that unless Saul “Canelo” Alvarez takes on either Callum Smith or Demetrius Andrade who are both promoted by Matchroom, the UK will be seeing no more of boxing’s premier attraction, this includes of course the imminent final installment of the trilogy with GGG. Likewise after Vasyl Lomachenko’s expected routine victory over Matchroom’s Luke Campbell, there will be another P4P superstar absent from British screens.

Usually a transparent promoter who likes to keep the fans up to date with what’s going on, Eddie Hearn plugged the positives of DAZN’s foray into the world of boxing, but then neglected to divulge the negative impact it would have on the UK, which is of course where his core business operates from. This will do little for his reputation as a “spin doctor” and for his popularity on both sides of the Atlantic.

The Matchroom stable now has 68 top quality operators including the recently deposed heavyweight champion Anthony Joshua, who remains a prominent figure in world boxing, his rematch against Andy Ruiz Jr. looks set to be perhaps the most talked about fight of the year. Hearn has also had moderate success in signing overseas fighters including current champions Andrade, Oleksandr Usyk, Maurice Hooker, Daniel Roman, Dmitry Bivol and Tevin Farmer not to mention top prospects such as Devin Haney, Michael Hunter and Anthony Sims Jr. However, the point here is we are now not only dealing with promoter rivalries, television companies and streaming services preventing us from seeing the best fighting the best, here in the UK we are also being denied the opportunity to see some of the top tier perform period.

With no word on when DAZN will be available in the United Kingdom, a rise in illegal on-line streaming solutions looks like a certainty for the foreseeable future.


« Golovkin no interest in Andrade or Jacobs, wants Canelo or “new fighters”