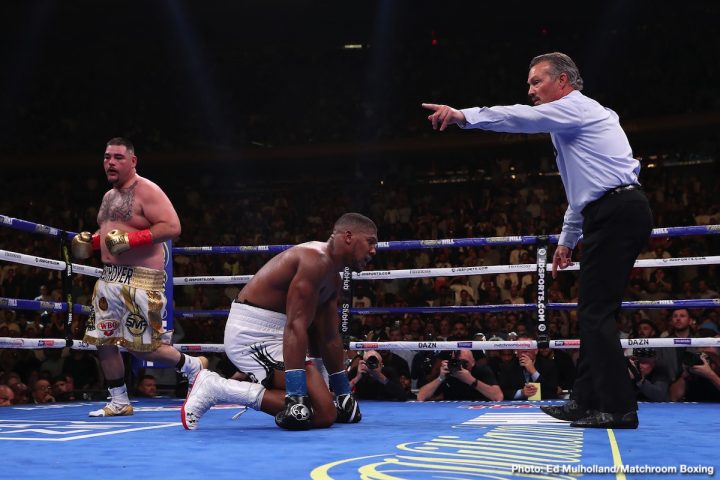 By Scott Gilfoid: Andy Ruiz Jr. (33-1, 22 KOs) ended the title reign of IBF/WBA/WBO heavyweight champion Anthony Joshua (22-1, 21 KOs) in stopping him in the seventh round on Saturday night at Madison Square Garden in New York. Ruiz Jr. knocked Joshua down twice in the seventh round. the official time of the stoppage was at 1:27 of round 7.

When the referee asked the exhausted and hurt Joshua if he wanted to continue, and said quietly, “Yes,” but he failed to take his arms off the side of the ropes.

The referee Michael Griffin had no choice but to stop the fight, as Joshua’s body language that he didn’t want to continue. His nose was bleeding, he was tired, and a sitting duck for Ruiz Jr. Had the referee the fight continue, Ruiz Jr. would have easily knocked Joshua down once more, and finished the job.

Earlier in the fight, Ruiz Jr. had knocked Joshua down twice in the third round after having been dropped himself. Joshua knocked Ruiz down with a big left hook. Ruiz Jr. looked hurt as he on his backside on the canvas. But after Ruiz Jr. got back to his feet, he stormed Joshua and staggered him with a big left hook. Moments later, Ruiz Jr. dropped Joshua. When Joshua got back up, his legs were like jelly, and he looked completely exhausted in the same way he was when he was dropped in the sixth round by 40-year-old Wladimir Klitschko two years ago. The difference was, Ruiz Jr. wasn’t foolish enough to just box Joshua for the remainder of the fight the way Wladimir did when he had him hurt.

“I just got beat by a good fighter tonight,” said Joshua after the fight. “This is all part of the story and the journey. Fire at heart, boxer by trade. He done well, he done what he had to do. Congratulations to the first ever Mexican heavyweight champion. We’ll bounce back. It’s guts and glory, but this is all about the legacy and story. He’s the champion for now,” said Joshua.

Joshua showed a lot of class after the fight in taking the high road in giving credit to Ruiz Jr. Joshua could have complained about the referee stopping the fight after he told him that he wanted to continue after the second knockout in round seven. Joshua chose not to muddy the war by taking the credit away from Ruiz Jr. for his victory. That’s a class act.

After resting in the fourth, fifth and sixth rounds, the 268 pound Ruiz Jr. came after Joshua in the seventh round after he landed a big left hand that hurt him. Ruiz Jr. looked a little shaken from the left hand from Joshua. This motivated Ruiz Jr. to attack with a flurry of shots that dropped him immediate. Seconds later, Ruiz Jr. flurried again on Joshua and knocked him down for the second time in the seventh round. Joshua slowly staggered to his corner, looking at his trainer as if saying, ‘Are you doing to stop it now.’ There was defeat in Joshua’s face. He looked like he wanted to be saved by his corner, but they didn’t throw in the towel. Instead, Joshua did it himself by looking lethargic and disinterested when the referee asked him if he wanted to continue fight.

After The fight was over, Joshua’s promoter Eddie Hearn came into the ring, and said that they have a rematch clause in the contract. He explains on executing the rematch clause, and having Ruiz Jr. come to the UK to defend his newly won IBF/WBA/WBO heavyweight titles against Joshua over there. The rematch will be taking place before the end of 2019.