Arum: ‘Pacquiao has a chance if Thurman is same guy as last fight’ 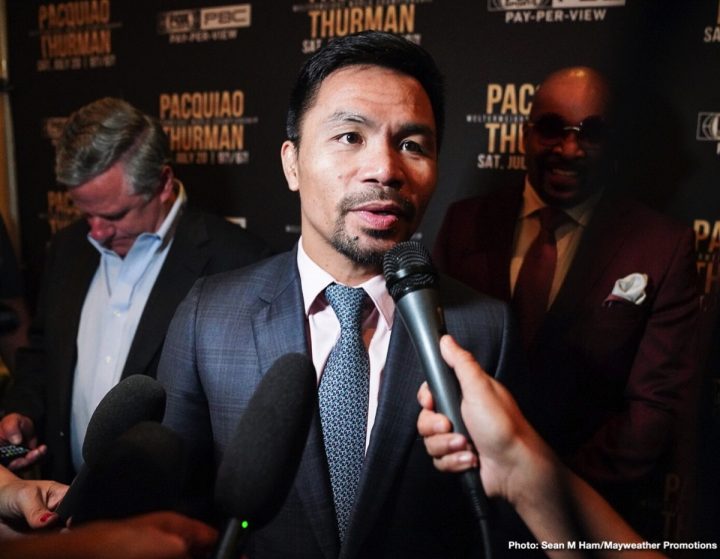 By Chris Williams: Manny Pacquiao’s former promoter Bob Arum says he’s got a shot at beating Keith Thurman if ‘One Time’ performs the same way he did in his last fight against Josesito Lopez earlier this year on January 26. Thurman looked highly beatable against Lopez.

That was Thurman’s first fight in 22 months, and it’s believed that he performed poorly because of the ring rust. However, if the lackluster performance by the 30-year-old Thurman is an indication of age, diminished reflexes and an inherently weak chin, then the 40-year-old Pacquiao has a real shot at winning this fight.

“It’s a funny thing. If Thurman needed that last fight to get rust off then he’s going to win easy, but if Thurman is the same guy he was in his last fight then Pacquiao has a chance,” said Arum to boxingtalk.com.

Josesito Lopez (36-8, 19 KOs) hurt Thurman in the seventh round with a big left hook to the head that had him wobbling. Lopez, 34, attempted to finish the job, but the round ended before he could knockout Thurman. If there had been another 30 seconds in the seventh, it’s quite possible that Thurman would have suffered his first career defeat. The fight ended up going to the scorecards with Thurman winning by the scores 117-109, 115-111 and 113-113. Boxing News 24 had Thurman winning 115-111. ‘One Time’ Thurman won the fight, but he looked like like he was 60% of the fighter he’d been in his previous contest two years earlier against Danny Garcia in March 2017.

Even in that fight, Thurman faded after six rounds, and was forced to back peddle for the entire second half of the fight. Thurman revealed afterwards that he’d been hampered by an injured elbow during the fight.

Pacquiao’s trainer Buboy Fernandez says Manny is angry with Thurman for the trash talking he’d been doing since their was signed, and he’s motivated to beat him. In the last 10 years of Pacquiao’s career, he’s seemingly lost the killer instinct to finish his opponents like he’d done up until 2009. Thurman’s trash talking about wanting to retire Pacquiao may be the missing ingredient to bring back the ferociousness that Manny had to his game a decade ago when he was knocking everyone out.

“Manny rarely badmouths an opponent, but he refers to Thurman as a braggart and arrogant,” Buboy said to the Manila Times. “The last time I saw him act this way was in [Erik] Morales III. If he wants to run him [Thurman] over, then I’ll let him do it. We’ll do everything, but with caution. He will be the recipient of Manny’s fury.”

Thus far, Pacquiao is looking powerful in training for the fight against Thurman. The power that Pacquiao is showing in working out on the heavy bag suggests that Thurman is going to be getting hit hard in this fight for as long as it lasts. Thurman has been saying that Pacquiao has “T-Rex arms”, and that he lacks the height and reach to land his shots against him. Thurman expects Pacquiao to leap in when he needs to throw his shots, and he’s predicting that he’s going to time him and nail him with a shot to knock him out. It’s possible that Thurman may do that, but if he can’t keep Pacquiao from landing his heavy shots, he’ll wind up hurt like he was against Josesito.

Thurman will have his World Boxing Association Super World 147-pound title on the line for Pacquiao, who will be coming into the fight as the WBA ‘regular’ welterweight champion. The WBA allowed Thurman to keep his WBA belt for the 22 months that he was out of the ring with injuries.

IBF welterweight champion Errol Spence Jr. (25-0, 21 KOs) wants the winner of the Pacquiao vs. Thurman fight. Spence will likely face WBC champ Shawn Porter next in the summer, but he’s not expected to pose a problem for ‘The Truth’ Spence. Arum isn’t sure what will happen with the Spence vs. Porter fight. Arum would like to make the fight between Spence and his fighter WBO welterweight champion Terence Crawford, but he says Spence’s management don’t want the fight now.

Porter fought poorly in his last fight against Yordenis Ugas on March 9 in beating him by a controversial 12 round split decision. Ugas dominated Porter, but lost a questionable decision. Based off that performance by Porter, he’s not going to last long against Spence, even if he runs like he did against Ugas. Porter has lost something from his game following his fight against Danny Garcia. He’s not the same fighter.