Arum hoping Spence vs. Crawford fight can get made in fall 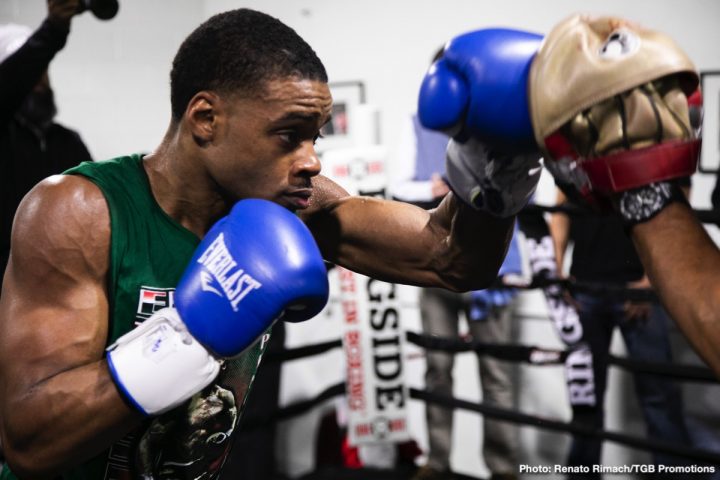 Spence (25-0, 21 KOs) is holding back on signing for a match against Porter for some reason. Arum says the reason why the Spence vs. Porter hasn’t yet been made is because it’s not a pay-per-view fight. Arum thinks it would be hard for Spence to go from fighting on PPV in his last match against Mikey Garcia to competing on regular broadcast TV. The money obviously would be different for Spence on non-PPV.

Crawford (35-0, 26 KOs) is coming off of a sixth round stoppage win over Amir Khan last April. The fight was shown on ESPN pay-per-view, and it’s rumored to have brought in a low number of buys. Spence’s last fight against Mikey Garcia on March 16 is believed to have brought in far more PPV buys than the Crawford-Khan fight. That’s not surprising, because Khan is viewed as a shot fighter by a lot of boxing fans.

Crawford to fight in the fall

“The plan for Terence Crawford is to fight in the fall,” said Arum to Fighthub. “We still are optimistic that we can make the fight that everybody wants to see, and that’s Crawford against Spence. I think Spence wants that fight and hopefully we’ll get it done. If we can’t get it done we’re gonna put Crawford in with the best available welterweight. I think it could be a major fight, like a major fight. I think it could do good numbers, a helluva lot more than Spence-Garcia,” Arum said about a fight between Spence and Crawford.

Well, assuming that Arum fails to make the Spence-Crawford fight for the fall, it’s likely that Crawford will wind up facing one of these guys next:

Arum doesn’t have much to choose from in the World Boxing Organization’s top 15 for Crawford to defend against in the fall. Collazo or Kavaliauskas have the best shot at getting a fight against Crawford. That would be a mismatch for Crawford agaist either of those fighters.

Arum: Spence vs. Crawford will bring in a lot of money

“There’s definitely a lot of money to be made for Spence and Crawford if they face each other in the fall,” said Arum. “Spence is with Premier Boxing Champions, and they may prefer to match him up against the winner of the Manny Pacquiao vs. Keith Thurman fight, or against Porter.”

Arum hit it on the head when he pointed out that PBC will be interested in matching Spence against the Manny Pacquiao vs. Keith Thurman winner or Shawn Porter. All three of those fighters are with PBC, so it makes a lot of sense for them to want to have Spence fight those guys rather than a fighter signed with Top Rank like Crawford. That doesn’t mean that Spence and Crawford won’t eventually fight each other. There’s too much money at stake for them not to fight. If the difference in money that Spence is making in regular fights against non-champions, then he’ll obviously push PBC to make the fight with Crawford.

Arum doubts Canelo vs. Spence fight gets made

“Well, that really is not real. Not realistic at all,” said Arum in taking about the Canelo vs. Spence fight being unlikely.

Given that Arum has something to gain by Spence not fighting Canelo, it’s difficult to buy what he says about this fight. Whether the Canelo vs. Spence fight takes place in September will come down to economics. If Golden Boy can make it worthwhile for Spence to sign for the fight, he’ll definitely consider taking it. There’s nobody else out there that will bring Spence the same kind of money that he can get fighting Canelo. Golden Boy Promotions would be open to a fight between Canelo and Spence for September.

Golden Boy Promotions clearly needs a good option for Canelo to fight that would bring in similar numbers as a third fight against Gennady Golovkin. They need to bring in subscribers to DAZN. Canelo vs. Spence is a fight that would do that. Spence wouldn’t come cheaply. There’s also the problem with Spence fighting on Fox for PBC. Canelo vs. Spence would need to be a shared network deal, and that means the audience would be split between DAZN and Fox.

“[Spence] Probably’ is not fighting Shawn Porter,” said Arum. “Obviously if that fight was made it would’ve been announced. So the fight can’t be made. Why can’t it be made? Because it’s not a pay-per-view fight, and nobody can afford the amount of money that Spence wants for a fight. The only way he can make that money is to fight against Crawford.”

What Arum isn’t saying is the Spence vs Crawford fight likely can’t get made anyway, because the purse expectations of the two fighters. Crawford will probably want a 50-50 split in order to fight Spence, and that’s not realistic. Spence will use his superior PPV numbers for his recent fight against Mikey Garcia as a reason why he doesn’t have to give Crawford the 50-50 deal that he wants. Spence might do the fight for a 60-40 split, but it’s unclear whether Crawford would agree to that.

Crawford would still likely make more money fighting Spence and taking the low money than he has in any of his remaining fights in his career. Crawford has marched through 10 years of his career without being involved in a big PPV fight. Crawford has had two PPV fights against Viktor Postol and Khan, but neither brought in a lot of buys. Another 10 years could fly by easily without Crawford ever getting a big fight. The choice is his. Crawford can take the small money now for a fight against Spence or he can potentially watch the last three or four years of his prime fly by without a big fight, and end up as a shot fighter having missed his chance. If Crawford believes that a big fight will come his way eventually, he’ll likely turn down the Spence fight, and up with nothing.