Whyte rates himself at #3, ahead of Tyson Fury 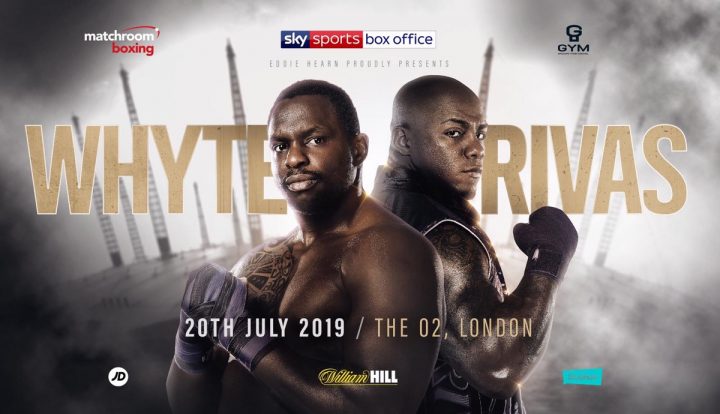 Although Whyte isn’t saying, he seems to have Anthony Joshua at #1 followed by Deontay Wilder at #2, and then himself at #3. The way that Whyte struggled against Joseph Parker last July, you can argue that he belongs behind him at #5 in the heavyweight division.

Whyte thinks the top heavyweights don’t want to fight him. Wilder has expressed interest in fighting Whyte, but he didn’t like the idea of not getting top dollar by Whyte’s promoters at Matchroom Boxing to take the fight with him. He also didn’t like the way that Matchroom promoter Eddie Hearn was seemingly setting up a situation where he wanted Wilder to build up his name more by fighting Whyte in order to make a fight between him and Joshua bigger. If Wilder had agreed to that move, he would basically admitting that he’s below Joshua and in need of building up in order to fight him.

Whyte has a lot to prove, because he’s not been fighting the best guys. The World Boxing Council wanted Whyte to fight in an eliminator match against Luis ‘King Kong’ Ortiz, but he chose not to. Whyte instead fought Lucas Browne, Parker, Dereck Chisora, Malcolm Tann and Robert Helenius. Whyte’s decision not to fight Ortiz is the reason he’s not the mandatory for WBC heavyweight champion Wilder.

For a lot of boxing fans, they rate the top heavyweights in the division as follows:

If Whyte could beat all three of the top heavyweight, he would be rated #1 in the division without question. The problem is, Whyte already showed that he’s not capable of beating the best with his 7th round knockout loss to Joshua in December 2015. Whyte probably would have lost to Parker if the referee hadn’t blown the call in the second round by giving Whyte credit for a bogus knockdown after he rammed heads with Parker, causing him to go down. The referee gave Whyte credit for a knockdown. There was a lot of fouling from Whyte in that fight he should have lost points for. In the 12th, Parker knocked Whyte down and him ready be knocked out when the fight ended. If Parker had fought hard like that earlier in the contest, he would have stopped Whyte.

Instead of worrying about his position in the regards to the other top heavyweights, Whyte, 31, should focus instead of his next opponent Oscar Rivas (26-0, 18 KOs), who he faces on July 20 on Sky Box Office at the O2 Arena in London, England. This is a good stay busy fight for Whyte. It’s not a PPV worthy fight though, but it’s a decent match-up.

Whyte is still hoping that the World Boxing Council will decide on making him the mandatory for the winner of the May 18th fight between Wilder and Dominic Breazeale. Matchroom Boxing promoter Eddie Hearn petitioned to the WBC on Whyte’s behalf to have the sanctioning body order the Wilder-Breazeale winner to face him in their immediate next fight. The rationale for that petition is Whyte has been ranked #1 with the WBC for close to two years, and that the sanctioning had ordered Whyte and Breazeale to fight for their interim WBC heavyweight title when Wilder was in negotiations for a rematch with Fury. When that fight fell through, Wilder’s management quickly negotiated the fight between him and Breazeale for May 18th.

Whyte feels that he’s fought enough high caliber heavyweights to be made the mandatory with the WBC without him having to fight in an official eliminator. The WBC likely has other ideas. They’re expected to announce their ruling on Whyte’s petition soon. It’s thought that the WBC will order Whyte to fight Luis Ortiz in an eliminator, and the winner of that fight will be the mandatory for the winner of the Wilder vs. Breazeale fight. In other words, the WBC will order Whyte take the fight that they already asked him to take last year against Ortiz in a secondary eliminator. If Whyte had taken the fight with Ortiz to begin with, he wouldn’t have anything to argue about. He would either be the WBC mandatory now or rebuilding his career if Ortiz beat him.

The only good heavyweight Whyte has fought since his loss to Joshua in 2015 is Parker, and his win over him was tainted due to an arguably poor officiating job done by referee Ian John Lewis. Aside from Parker, Whyte’s recent wins him come against journeyman Dereck Chisora, Malcom Tann, Robert Helenius, Ian Lewison and Lucas ‘Big Daddy’ Browne. We just saw British domestic level heavyweight Dave Allen stop Browne in the third round on April 20. Allen did a better job of beating Browne than Whyte did with his sixth round knockout win over ‘Big Daddy’ in March of last year. Browne should have lost to journeyman Kamil Sokolowski last March Browne was given a six round points decision, but he appeared to lose that fight.