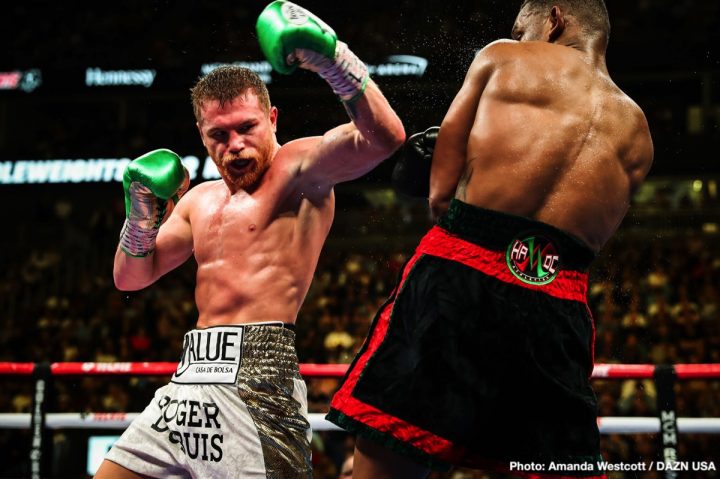 De La Hoya didn’t mention whether there would be a catch-weight to make it a little easier on Spence to bridge the gap to middleweight.

It’s unclear what happened with Canelo wanting to fight only for world titles at 160 and 168. Last Saturday night, Canelo, De La Hoya and trainer Eddy Reynoso had spoken of the goal for Alvarez being to unify the divisions. Canelo didn’t even mention Gennady Golovkin’s name as a potential opponent for September, because he doesn’t hold a title. If Spence moves up to 160, he wouldn’t have a world title either. He would be challenging Canelo for his IBF/WBA/WBC middleweight belts.

“I am letting you know that we love the fight as well and I’ve always said that Errol Spence is one of the most talented fighters out there,” said De La Hoya said to Dan Rafael at ESPN.com. “There’s no reason why Spence can’t move up to middleweight if Mikey Garcia could go up (from lightweight) to welterweight to fight Spence. And if Spence fights Canelo, it will be the most money Errol Spence will ever make. I would love to start the ball rolling. Let’s do it. We just want to get Canelo the best fights and the toughest challenges out there,” De La Hoya said.

Spence vs. Canelo would need to take place at a catch-weight of 155 lbs. for it to be fair. Moreover, there would need to be a rehydration clause for it to make sense. If Canelo rehydrates to 185 lbs on the night for the fight, Spence might be too light to handle his power and size. De La Hoya said last week that Canelo walks around at 190 lbs. Spence walks around in the low 170s. So if Canelo rehydrates to 190, Spence is going to be too small. In Spence’s last fight against Mikey Garcia on March 16, he looked really skinny, and nowhere near what a middleweight like Canelo.

A fight between Spence (25-0, 21 KOs) and Canelo would be huge for bringing in the subscriptions for DAZN. That would be a huge positive for the company for a fight between these two fighters, even if were a shared network deal with FOX or Showtime. There would be a massive amount of interest in a fight between Canelo and Spence. De La Hoya must realize that. The U.S boxing fans don’t know who Callum Smith is right now, so that would be a big waste for Canelo to fight him. It would be another another Canelo vs. Rocky Fielding type of match in terms of name recognition by the casual fans. Callum is obviously a very good fighter, but he’s too much of an unknown for him to be a good option.

Canelo vs. Spence makes a lot more sense more sense than Canelo facing Callum Smith or Sergey Kovalev. Those aren’t doable fights right now for Canelo, and I think Golden Boy realizes that. WBO light heavyweight champion Kovalev (33-3-1, 28 KOs) be defending his title against his mandatory Anthony Yarde (18-0, 17 KOs) in the summer, and he won’t be available to return to the ring to fight Canelo in September. Callum Smith would want the fight fight to take place in Liverpool, England rather than the United States. Due to the time differences between England and the U.S, it’s not a good going to work for DAZN.

If Kell Brook and Amir Khan hadn’t been so badly beaten when they tried stepping up to the middleweight division for their respective fights against Gennady Golovkin and Canelo Alvarez, Spence might be open to a fight against Canelo. Unfortunately, the way that Brook and Khan were so royally thrashed in their fights at middleweight, it’s not likely that Spence, 29, would want to take the huge risk of moving up two weight classes to fight Canelo. Even if Spence wanted to make that fight, his adviser Al Haymon likely would let him know he should stay at 147 and focus on his big money fights against Shawn Porter, Keith Thurman, Manny Pacquiao, Danny Garcia and Terence Crawford.

There are some good fights still for Spence at welterweight. By no means has Spence exhausted all the great fights that are available to him yet at 147. If Spence had already tapped out all the competition at welterweight, then it would make sense for him to move up in weight to try and fight the likes of Canelo. By the time Spence does move up in weight, it’ll be interesting to see if Canelo is still around as one of the top guys at middleweight or super middleweight. Things could change quickly for the worst for Canelo. He struggled in his two fights with Gennady Golovkin, and in his match last Saturday night against IBF 160-pound champion Daniel Jacobs. Canelo is barely beating the competition now, and he’s having a lot of problems with his stamina.

Spence still needs to prove that he’s the best fighter at 147. His competition since he turned pro has not that impressive. He has wins over Brook, Lamont Peterson, Chris Van Heerden and Mikey Garcia. That’s about it. Spence hasn’t been matched against the elite level fighters yet. At the time Spence fought Brook, he was coming off eye surgery after his loss to GGG in September 2016. Lamont Peterson was old, and nowhere near the fighter he’d been eight years ago at the time he fought Spence. For Spence to go up to middleweight now to fight Canelo, it would be a crazy idea given how little he’s accomplished at welterweight.

It would smarter for Spence to move up to 154 to try and prove himself against the likes of Jarrett Hurd, Jaime Munguia, Tony Harrison, Erislandy Lara or Jermell Charlo before moving up to middleweight to take on a bruiser like Canelo. That’s too much of a step up in weight Spence. Canelo could hurt Spence the way he did Khan in 2016. Canelo knocked Khan clean out in the sixth round. It’s hard to forget the image of Canelo peering down at an unconscious Khan moments after knocking him out.