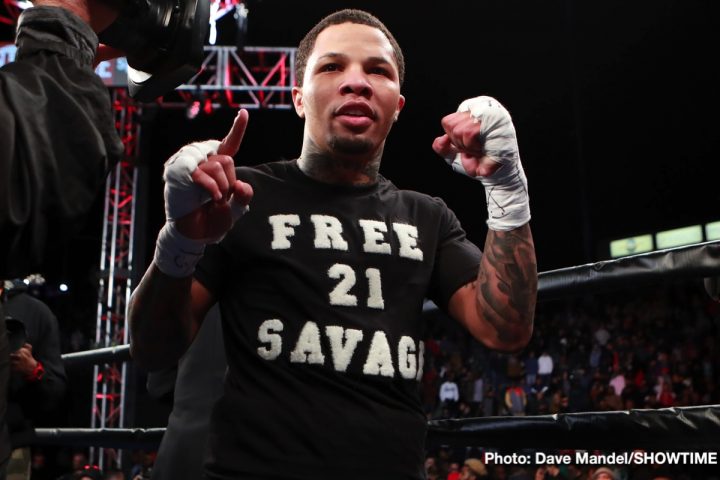 Gervonta, 24, has by far the easier fight compared to Danny Roman’s ordered title defense against unbeaten 2016 Olympic bronze medalist Akhmadaliev. Given the war that Roman, 28, was recently involved in against former IBF 122-pound champion TJ Doheny on April 26 in Los Angeles, California, Akhmadaliev, 24, figures to be a hard fight for him.

Tank Davis will be defending against the little known Nunez in his hometown of Baltimore on the 27th of July on Showtime. Davis and the 25-year-old Nunez have until June 6 to get the fight negotiated otherwise it’ll go to a purse bid on that date. Nunez is from Panama, and he’s won his last 10 fights since losing to Barnie Arguelles by a second round knockout in January 2015. Nunez also has an earlier loss in his career to Saimon Siris by a third round disqualification in 2010.

It’s a mystery of how good Nunez is because his resume is filled from top to bottom with obscure fighters with poor records. The WBA sees something in Nunez for them to rank him at #2 with their organization, but he’s completely unproven as a fighter based on the competition that he’s been facing. Nunez could do anything on July 27. He might pulled an upset or more likely he’ll be knocked out in the first minute of round one against Nunez. It would have made more sense for the WBA to wait until Nunez beat someone good before they gave him a high ranking with their organization.

Boxing fans want to see Tank Davis take on better opposition, but that’s hard for him to when the WBA orders him to fight guys like Ricardo Nunez. For all intents and purposes, the WBA is pitching a softball to Gervonta for him to hit it out of the park by ordering him to defend against an unproven fighter with a weak resume like Nunez.

Many of the contenders ranked below Nunez in the WBA’s top 15 possess far better resumes than him. With Nunez getting a title shot, it makes it look like the WBA has their rankings upside down. It makes little sense for Nunez to be given a world title shot as a mandatory challenger. This is more of the type of opponent that Gervonta would be taking in a voluntary defense.

With only six fights on his record since turning pro last year in March 2018, Akhmadaliev is getting a fast push by the WBA with them ordering Danny Roman to defend against him next. However, Akhmadaliev has a lot of experience as an amateur in Uzbekistan. He finished his amateur career with a record of 300-20. Akhmadaliev isn’t on the same level as two-time Olympic gold medalist Vasiliy Lomachenko in terms of talent. Lomachenko was already challenging for a world title in his second fight as a pro against Orlando Salido.

Akhmadaliev isn’t that type of talent, but it is impressive that he’s getting a title shot in only his seventh fight as a pro. That tells you that the WBA sees Akhmadaliev capable of handling himself against the older more experienced 28-year-old Roman. As an amateur, Akhmadaliev was beaten by Michael Conlan in the 2015 World Amateur Championships. In the 2016 Olympics, Akhmadaliev lost to Cuban talent Robeisy Ramirez by a 3-0 score. Ramirez went on to win the gold medal in the Olympics.

As a pro, Akhmadaliev has recent victories over Carlos Carlson, Isaac Zarate, Ramon Contreras and Luis Fernando Molina. Akhmadaliev still hasn’t fought anyone good enough to give a clear indication of how well he’ll do against Roman. What you can say is Akhmadaliev the timing of the fight is bad for Roman. With him coming off of a grueling war against TJ Doheny, the southpaw Akhmadaliev is a tough opponent. Akhmadaliev has heavy hands, and he’ll be looking to go to war with Roman from start to finish. Akhmadaliev isn’t a defensive fighter like Lomachenko. He can be hit. Akhmadaliev wins his fights by going to war with his opponents, and wearing them down with his powerful left hands to the body and right hooks. Akhmadaliev likes to attack his opponents at all times. This could play into Roman’s hands if he’s able to take Akhmadaliev’s power. It won’t be easy for him to do, because Akhmadaliev is fresh, and he has a lot of amateur experience going for him. It won’t be surprising if Roman loses this fight. Akhmadaliev is a really tough fighter to be facing after his match with Doheny.

This will be Roman’s fourth defense of his WBA super bantamweight title that he won in September 2017. Since capturing the WBA strap, Roman has successfully defeated Ryo Matsumoto, Moises Flores and Gavin McDonnell in defenses of his WBA belt. Roman’s fight against IBF champion TJ Doheny last April was a unification match.

For Roman to last as the WBA champion, he’s going to need to work on his punching power and his defense. He gets hit too much in his fights, and he lacks the punching power to score early stoppages. If Akhmadaliev is able to land the kind of shots against Roman that the 31-year-old Doheny was, he’s going to have a good chance of scoring a knockout. The 24-year-old Akhmadaliev is younger than Doheny, and he’s not going to let up in the later rounds. Doheny looked exhausted in the championship rounds against Roman, and that limited what he could do. The longest fight Akhmadaliev has had as a pro was his match against Isaac Zarate last November. Akhmadaliev stopped him in the ninth round.

Richard Commey vs. Ray Beltran likely for June 28 on ESPN »