After a long-wait, IBF Junior Welterweight champion Ivan “The Beast” Baranchyk will make the 1st defense of his crown when he takes on fellow undefeated Josh Taylor today at The SSE Hydro Arena in Taylor’s hometown of Glasgow, Scotland.

Baranchyk, who won the title with a 7th round beatdown of Anthiny Yigit on October 27th in New Orleans, is ready to prove that he is the definition of a world champion by stepping into the lions den of Glasgow. 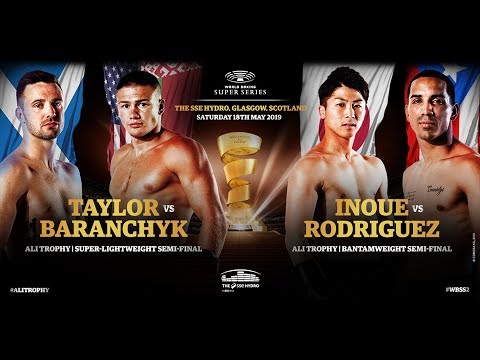 Baranchyk of Amursk, Russia, who now calls Miami, Oklahoma home is considered one of the hardest punchers in boxing, and he knows that he will have to land some of his patented power shots in order to silence an expected sellout crown at The Hydro Arena.

The 26 year-old Baranchyk is a five-year professional, who already has wins over seven undefeated fighters, and he is looking for Taylor to be the eighth to fall while at the same time defending his title and advancing to the finals of the WBSS and meet Regis Prograis in what would be a big fight in The United States

The highly-regarded Taylor has a record of 14-0 with 12 knockouts, has wins over undefeated fighters Ohara Davies (15-0) and Ryan Martin (22-0) as well as former world champions Miguel Vazquez and Viktor Postol

“One of the great privileges of my life is being associated with Ivan Baranchyk. He is all class, and people have no idea about his level of determination. I expect him to win and to build a legacy as not just a champion but a great champion,” said David McWater of Split-T Management.

Baranchyk is managed by Split-T Management and is promoted by DiBella Entertainment, Fight Promotions and Holden Productions.

Freddie Roach on WBSS: “This is what we need in boxing”

Renowned trainer Freddie Roach is excited to guide Ivan Baranchyk in the battle of the unbeatens vs Josh Taylor, the WBSS Super-Lightweight Semi-Final and IBF World Championship tonight at The SSE Hydro in Glasgow, Scotland.

Roach, who is widely regarded as one of the best boxing trainers of all time, the man behind champions like Manny Pacquiao, Julio César Chávez Jr. and Michael Gotto, has only been with ‘The Beast’ for eight weeks, but the legend is impressed by what he has been seeing so far from the Belarusian.

“Ivan is a very good fighter,” said Roach. “He listens very well, he is very dedicated, he trains really, really hard. He is a really strong kid.”

Roach has prepared his boxer to enter the Lion’s Den against Scotland’s Josh Taylor, the undefeated southpaw from Prestonpans just on hour’s drive from Glasgow.

“We are in with a strong opponent of course. This fellow is tall, he is lanky, shabby, he has got this nice jab and this counter hook over the jab with his southpaw stance,“ said Roach and continued:

“The training has gone really well, and Ivan has had some good sparring. I have had four southpaws in my gym, really good kids, and it worked out really well.

We have a good game plan, and Ivan has been working really well with it. Ivan is the underdog, and I love being the underdog. We got something to prove.

“We are here to win, and I think my guy will knock him out. I don’t think he (Taylor) has ever been in a real hard, hard fight, and this might be his first one. He better be ready. I met him, he is a very nice man, and I wish him the best of luck, but he better be ready,” said Roach who likes the best v best format of the World Boxing Super Series.

“That’s what I love to see in boxing. This is what we need in boxing, more of this. It doesn’t get any better than this.”

And the best at 140lb, Roach believes, is either Taylor or Baranchyk:

“I believe the winner of this fight will win the Ali Trophy.”

A limited number of tickets for the Monster WBSS Semi-Finals night, Ivan Baranchyk vs Josh Taylor and Naoya Inoue vs Emmanuel Rodriguez on 18 May at The SSE Hydro in Glasgow, Scotland are available from TheSSEHydro.com and at the box office.

McFadden: Inoue is a long-term target!

Reece McFadden and Naoya Inoue share the same bill in Glasgow tonight – and McFadden would love the chance to be sharing a ring with the Japanese star in the future too.

Former amateur star McFadden (2-0, 1 KO) has made a good start to his professional career, and returns to action this evening on the World Boxing Super Series undercard as the SSE Hydro in Glasgow.

The bill also sees pound-for-pound superstar Inoue face Emmanuel Rodriguez in the semi-final of the tournament, and McFadden is aiming to fight Inoue during his career.

McFadden said: “I would love to be in with Inoue one day. To be the best, you’ve got to beat the best. I did it with Andrew Selby in the amateurs and now I have the same mentality as a professional.

“This card inspires me a lot. It’s at The Hydro and all the Scottish fans will be buzzing for it. It’s a great platform for the likes of me.

“The whole scene is buzzing. There are a lot of good up and coming fighters. It’s back on the map and it’s probably the best it’s ever been.

“I want to move as quickly as possible but it’s up to my team. I love the ‘wee’ gloves. It’s totally different from the amateurs.”

The event at the Hydro also features several of McFadden’s MTK Global team-mates, as Chantelle Cameron, Lee McGregor and Tommy Philbin are in action too.

Exciting star Lee McGregor returns to action in Glasgow tonight – and he hopes a win there can lead to a future showdown with British champion Kash Farooq.

McGregor (5-0, 5 KOs) competes on the World Boxing Super Series undercard at the SSE Hydro this evening, before he then heads to the Emirates Arena next month to defend his Commonwealth bantamweight title against Scott Allan.

If he is victorious in those two fights, McGregor has made it clear that he would love to have a huge Scottish showdown with Farooq later this year.

McGregor said: “The Kash Farooq fight has to happen! The Scottish fans want it and it’s got the makings of a fantastic fight and could be one of the biggest all-Scottish clashes for a very very long time. I believe it will sell out most arenas in Scotland.

“Ideally I’ll make a successful defence of my commonwealth on June 22nd and then in September or October the big Scottish showdown has to happen.

“Farooq will have won the British title outright which is something I think they want to do before they fight me which is fair enough, so all goes well the Scottish fans can finally get what they want.

“Before all of that it’s great to be on this bill in Glasgow tonight with three of my MTK Global team-mates. Hopefully we all pick up wins and carry on building our goals to become champions just like Josh Taylor.

“It’s brilliant that Naoya Inoue is fighting too as he is an unreal talent and I’m looking forward to seeing him up close. He’s also my weight so I’m even more excited to see how good he really is.”