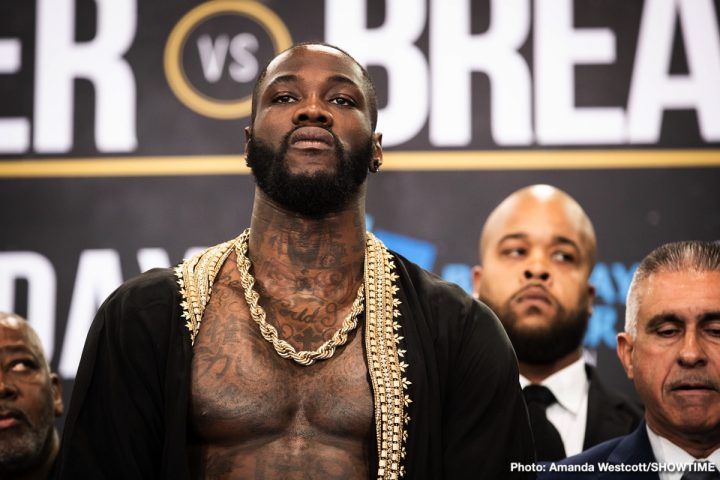 By Allan Fox: At Friday’s weigh-in, WBC heavyweight champion Deontay Wilder let challenger Dominic Breazeale know that Saturday will be “judgement day” when the two of them meet at the Barclays Center in Brooklyn, New York.

Wilder has made it clear that he doesn’t like Breazeale, and he’s going to hurt him when the two of them fight tomorrow.

Interestingly enough, the Wilder and Breazeale had a peaceful weigh-in with them just staring during the face off. It could be that Wilder is tired of trash talking with Breazeale, and he just wants to get it over with once and for all.

“There’s nothing more that needs to be said for tomorrow is judgement day,” Wilder said.

Breazeale is going to have a big weight advantage of 32 pounds on Saturday. Breazeale weighed in at 255 lbs on Friday compared to Wilder’s 223 pounds. Although that’s not as bad as the 44 lb weight advantage Tyson Fury had over Wilder last December, it’s one of the highest of his career. Wilder had major problems dealing with Fury’s weight advantage. If Breazeale is anywhere near as difficult for Wilder, he could lose on Saturday night.

Wilder’s added weight of an additional 11 lbs. for this fight could result in him hitting harder. Wilder’s trainer says he’s hitting harder now that he’s put on extra weight. If that’s true, then it could be an early night for Wilder on Saturday night.

“Oh man, this is going to be a blowout,” Wilder said.

This is not going to be a competitive fight, according to Wilder. He’s counting on being able to destroy Breazeale right away. If the fight doesn’t pan out the way that Wilder thinks it will, he’s going to need a good backup game plan that he can use. Breazeale is big, and hits harder. The last thing Wilder needs is to be getting hit a lot by the big 6’7″ Breazeale. Wilder’s chin isn’t the best. We’ve seen him hurt by non-punchers in the past like Tyson Fury.

Wilder will be looking to make his ninth title defense of his WBC belt. There aren’t too many champions that have made that many title defenses. Up until now, only Mike Tyson, Joe Louis and Muhammad Ali have defended their titles that many times.