Terence Crawford vs. Kell Brook possible for later this year in UK 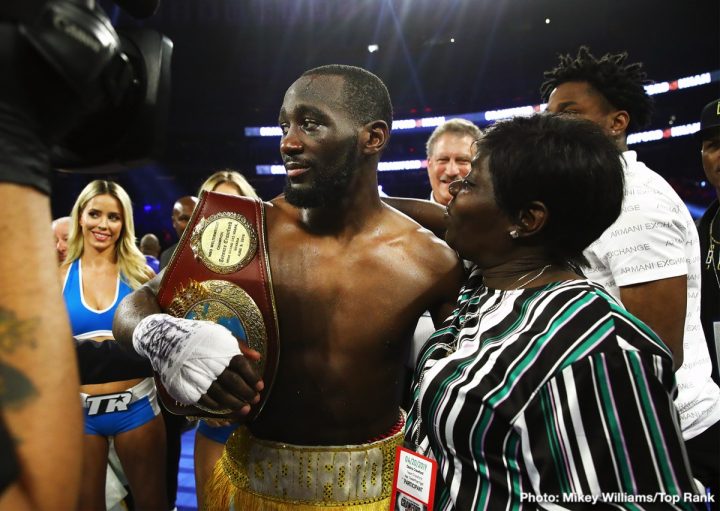 By Charles Bruns: Terence Crawford could be defending his WBO welterweight title later this year in the UK against former IBF 147-pound champion Kell Brook. Crawford’s promoter Bob Arum says he would like to make the fight between Crawford (35-0, 26 KOs) for late 2019.

Brook is taking a big risk in looking to fight Crawford, who is seen as the #1 welterweight in the division by a lot of boxing fans. Brook is gambling everything in taking on Crawford. If Brook beats Crawford, his name will be vaulted to the top of the 147-pound division, and it’ll setup some big fights against the likes of Manny Pacquiao, Errol Spence Jr., Keith Thurman, Danny Garcia, and of course, Amir Khan. As good as Brook looked in his fights with Gennady Golovkin, Shawn Porter and Spence, you can’t rule out an upset victory for him over Crawford, as long as his eyes hold up.

Arum is in contact with Brook’s promoter Eddie Hearn of Matchroom Boxing, trying to put together a deal to have WBA/WBO lightweight champion Vasiliy Lomachenko come over to the UK to face Luke Campbell for the vacant WBC 135-pound title later this year in either Hull or London. Arum will use his time speaking with Hearn to try and put together a fight between Brook (38-2, 26 KOs) and Crawford for the UK. That’s where the fight makes the most sense, because Brook is able to bring in huge crowds in England. Crawford, 31, is an excellent fighter, but he’s not someone that can draw a massive crowd the way Brook can in the UK.

Crawford recently defeated Matchroom fighter Amir Khan by a sixth round knockout on April 20 on ESPN pay-per-view at Madison Square Garden in New York. Arum is more than willing to have Crawford fight another one of Hearn’s fighters in Brook if he wants to make that contest. Hearn would ideally prefer to match Brook against Khan next, but that’s not within his control. Khan (33-5, 20 KOs) is the decider of who he faces, and he doesn’t seem to be quite ready yet to take the fight with Brook, but that’s a match that could happen soon, possibly by 2020. Brook has made it made it clear that he wants the Crawford fight next, and he seems to be interested in that fight as well.

For Crawford, Brook is the best available opponent for him. Crawford wants to fight Errol Spence, but that’s not going to happen yet. It might happen next year depending on whether Spence can unify the the division by that point. Spence is expected to take on WBC champion Shawn Porter in August followed by the winner of the July 20th fight between WBA Super World welterweight champion Keith Thurman and WBA ‘regular’ champion Manny Pacquiao. If Spence beats Porter and the Pacquiao-Thurman winner, he’ll have 3 of the 4 welterweight titles in his possession. The only belt that Spence will need to round out his collection is Crawford’s World Boxing Organization strap. Spence’s manager Al Haymon will likely then reach out to Arum to make the fight with Crawford with all the welterweight titles on the line.

Tyson Fury to fight in September in U.S in New York says Arum »