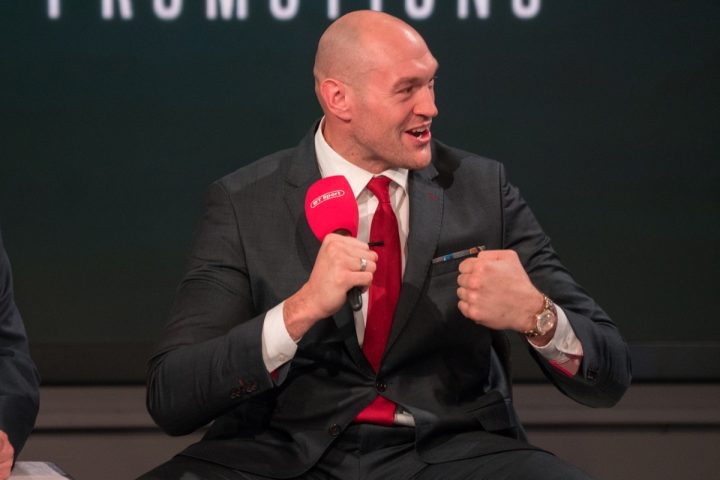 By Trevor McIntyre: Promoter Bob Arum of Top Rank revealed on Monday that his ultimate goal is to turn British heavyweight Tyson Fury into a popular fighter in the U.S to become another George Foreman. Arum believes it’s possible for lineal heavyweight champion Fury (27-0-1, 19 KOs) to become the biggest star in the United States, as well as worldwide. Further, Arum sees Fury being the unified heavyweight champion of the world by this time next year in 2020. For Fury to do that, he’ll need to defeat IBF/WBA/WBO heavyweight champion Anthony Joshua and WBC champion Deontay Wilder.

Former two time heavyweight champion George Foreman (76-5, 68 KOs) became famous after he returned from a 10-year layoff in 1987 at age 38, and eventually captured the IBF/WBA heavyweight champion Michael Moorer by a 10th round knockout in November 1994 to become the oldest heavyweight champion ever at age 45. Although didn’t keep his titles for very long, he still won over a lot of boxing fans in the U.S. Arum believes he can turn Fury into another Foreman. It’s going to be a lot harder for Fury to win over the U.S boxing public, because he’s not a big puncher like Foreman was. Foreman was considered by some as a Mike Tyson type of knockout puncher in the first part of his career when he was destroying guys like Joe Frazier and Ken Norton. Foreman gained fame in beating those guys, and losing to Muhammad Ali. During Foreman’s amateur career, he won an Olympic gold medal in 1968. Foreman’s fame wasn’t just by accident. He had credentials going into the second part of his career when he returned to the ring after a 10 year layoff.

“The public is not without power. The public can insist on a fight happening,” Arum said at the Fury-Schwarz news conference on Monday in talking about the big matches between Fury, WBC champion Deontay Wilder and IBF/WBA/WBO champ Anthony Joshua being possible, as long as the boxing fans insist on them taking place. ”You’re the fans. You’re the ultimate decider.”

The reason why Fury isn’t fighting Wilder and Joshua right now isn’t because of those two champions not wanting to face him. That’s not what the problem is. Arum makes it sound like it’s Joshua and Wilder’s fault why Fury isn’t fighting them. The reason why the Wilder vs. Fury 2 fight isn’t happening is because Top Rank pulled Fury out of negotiations with Wilder, and decided to try and build him up with a mismatch against a weak opponent in Tom Schwarz. Wilder and his management wanted to face Fury in a rematch on May 18th, but Top Rank liked the idea of trying to build Fury into a star by putting him in against Schwarz. Whether Top Rank will continue to match Fury against lesser heavyweights in the same mold as Schwarz is unclear.

Fury, 30, will be taking on Tom Schwarz (24-0, 16 KOs) next month on ESPN+ on June 15 at the MGM Grand in Las Vegas, Nevada. The fight hasn’t attracted a great deal of attention as of yet, since few American boxing fans have heard of Fury or Schwarz. Arum signed Fury, a British heavyweight, to a lucrative contract recently with Top Rank Boxing, and he wants to build him into a big star in the U.S. Up until now, Fury’s claim to fame was his narrow 12 round unanimous decision win over IBF/IBO/WBA/WBO heavyweight champion Wladimir Klitschko, which took place November 2015 in Dusseldorf, Germany. Fury won the fight by the scores 115-112, 116-111 and 115-112. Klitschko was 38-years-old at the time, and showing serious signs of slippage due to his advanced age. There aren’t too many fighters in boxing that are able to fight at a high level when they’re nearing 40, and Wladimir was no exception. He looked shot, and couldn’t pull the trigger on his punches against Fury. It was the same that fans saw from Wladimir in his previous fight in April 2015 against Bryant Jennings. Wladimir couldn’t throw or land his power shots. The only thing he was capable of doing was jabbing and moving around the ring. Wladimir fought like an over-the-hill fighter against Jennings. As such, it was no surprise when Fury beat Wladimir in his next fight in November 2015.

”In talking to Tyson Fury, I realized I could do for Tyson what I did for George Foreman,” Arum said. ”George Foreman, you remember, had a great career. He took 10 years off. He came back, he was a minister, and he set the world on fire, the boxing world, the sport’s world, and the public; not only with his ability, but more than that, with his charisma, and he became larger than life. Endorsements came one after another. Finally with one endorsement, he hit the jackpot, and that was the Foreman Grill, which he sold his interest for almost a quarter of a billion dollars. I realized that he [Fury] will mesmerize the U.S market. As far as his boxing ability, he has the ability. That’ll take care of itself. He has a trainer that will be able to prepare him for his fights. But as personality, he will take America by storm. Not only does he have behind him the biggest sports network in the world ESPN, which has five channels in the U.S alone 24/7, feeding the public sporting events, talks about sports, he’ll be a feature on ESPN. But ESPN is a subsidiary of Disney, and he will have the entire Disney organization behind him. That means he will be booked on our late night shows on ABC with Jimmy Kimmel; millions of people watch it, because we are not just satisfied with making an impact with Tyson just with the boxing fans or just with the sports fans. We want the public at large to know him, care for him, to listen to his story. We think when that happens, he will be the most famous athlete in the world. That’s our goal. There’s no question that it’ll [Fury vs. Schwarz fight] will be sold out. It’ll be a sellout,” Arum said.

It’s going to be difficult for Arum to turn Fury into a popular guy like Foreman was. Fury doesn’t pack a punch like Foreman, and he’s not as funny as him as well. Foreman had a sense of humor that made him like-able to the U.S boxing fans. Foreman was from Texas, and he had a folksy style of talking that made him popular with the average American fan. Foreman was a very good talker, and he came across as modest. Foreman admitted that he deserved to lose to Muhammad Ali and Jimmy Young earlier in his career. In contrast, Fury sounds egotistical and unwilling to admit that that he didn’t do enough to beat Deontay Wilder in their fight last December. Instead of admitting that he was knocked out in the 12th round by Wilder last December, Fury claims he beat him, and should have been given the win. Fury’s English accent makes him hard to understand sometimes.

”There’s no doubt that Wladimir Klitschko was the undisputed king of the division, correct?” Fury said. ”When I kicked his ass, I became the best fighter in the heavyweight division. Number one. There was no #2, 3 or 4, when Klitschko was the undisputed king, because he couldn’t fight his own brother [WBC heavyweight champion Vitali Klitschko]. So when I beat him, I became that. You know what? It didn’t change me one bit. When that happens next year [Fury beating Wilder], because it will, because he can’t beat me, I’ll still be the same person I am today, because REAL people don’t change. They just stay the same, because I’m happy in this skin. This is me. I already beat the undisputed champion of the world [Klitschko]. I already had that. For those who haven’t seen it, they can watch it again. I’ll be going back shortly. I’m already the lineal heavyweight champions, going back to the days of John L. Sullivan and Jack Dempsey, right up until today. I have something that no other heavyweight in the world possesses, and that’s the lineal heavyweight championship of the world. I’ve had all the other belts. Nobody else has had that; only me,” Fury said.

Fury will get his chance to prove whether he’s the real deal in a rematch with Wilder in 2020, as long as his promoters at Top Rank are willing to make the fight next year. If they want to let the rematch marinate until 2021 or later, they could be taking a risk. Wilder might get beaten by Joshua or Dillian Whyte. Fury can still face Wilder, but there won’t be as much interest from boxing fans in seeing the two of them fight under those conditions.

”They’re both good fights for the fans,” Fury said about future fights against Anthony Joshua and Deontay Wilder. ”Either one, it doesn’t really matter to me [which of the two he faces first]. I already beat Deontay Wilder in his own country. I didn’t get the decision, but I’m not going to cry about that. So whoever, it really doesn’t matter. However, whoever, I said I’ll fight them. It’s really not important to me, because they’re just men with boxing gloves, and I’ll beat both of them time and time again. If we fight 10 times, I’ll win 10 times out of 10. So all we need to do is stop messing around and get the fight on,” Fury said.