Usyk (16-0, 12 KOs) will be making his heavyweight debut against former world title challenger Carlos Takam (36-5-1, 28 KOs) in a 10 round fight this month on May 25 on DAZN at MGM National Harbor, in Oxon Hill, Maryland. The WBO hasn’t installed Usyk as Joshua’s mandatory yet, but they’re expected to do that shortly.

”100%, I’d be down for that,” Joshua said when asked by IFL TV if he’d be willing to fight Usyk next after his match with Andy Ruiz Jr.

With the 6’6” Joshua’s huge size, weight and power advantage that he would have against the 6’3” Usyk, there’s no reason why he wouldn’t take the fight with him. The southpaw Usyk will have a lot of issues trying to deal with Joshua’s size advantage in their fight. Usyk didn’t look all that powerful in his last fight against Tony Bellew last September. Bellew was catching Usyk with heavy shots in the early going, and he had him looking concerned. Bellew is nowhere near as powerful as Joshua. If Bellew had Usyk looking worried, one can only imagine how Joshua will have him looking.

Usyk might need to re-think his decision to fight at heavyweight if he gets smashed by Joshua. Will Usyk choose to go after WBC heavyweight champion Deontay Wilder if he gets knocked out by Joshua or will he move back down to the safety of the cruiserweight division? There aren’t too many cruiserweights that have been able to make the move up to heavyweight and do well. Evander Holyfield and Michael Moorer are a couple exceptions in recent years. Holyfield was a big puncher at cruiserweight, and a lot more dominating than Usyk. For boxing fans that weren’t aware how good Holyfield was at cruiserweight, they need to take a lot at his record, and watch some of his old fights on Youtube. Holyfield was such a big puncher at cruiserweight, that it was possible for him to move up in weight and do well. Usyk is more of finesse type of fighter in the Jimmy Young and Chris Byrd type of mold. Those were small heavyweights that won fights by being crafty. They couldn’t just stand and trade with guys. Both guys had limited success at heavyweight. Young defeated George Foreman in the first part of his career in a big upset. Byrd defeated Vitali Klitschko in a shocking upset. Usyk didn’t look good in defeating Joe Joyce in the World Series of Boxing. Usyk’s face was badly reddened from Joyce’s shots. That was a fight that took place before Joyce bulked up to 260. He was only around 230 lbs at the time he fought Usyk, and he did a lot of damage to his face in their short fight. Against a big heavyweight like Joshua, Usyk is going to be completely out of his element.

If Usyk doesn’t lose to the 38-year-old Takam this month, he’s almost surely going to get beaten by Joshua. It wouldn’t be surprising if Usyk retires from boxing with the payday he gets against Joshua, because there won’t be any big money fights for Usyk if he moves back down to cruiserweight.

”No way, what for?” Joshua said if he would vacate his WBO title to avoid a fight with Ruiz Jr. ”I never thought of vacating a belt. That’s all political stuff. I wouldn’t vacate, and I’d definitely fight Usyk. Good luck to him. He’d a good addition to the heavyweight crop for sure. Very talented. That’s a good name. For instance, if he was in the heavyweight division, and he wasn’t making his debut, if it wasn’t [Luis] Ortiz, he would have been in conversation with Usyk. DAZN wants good fights on their platform as well. Broadcasters need solid fights as well. They want someone like Usyk. They would push for the Usyk fight. They would rustle up all the finances they can to get that type of fight. The broadcasters want the lucrative fights,” Joshua said.

It’s too bad that Usyk isn’t going to be fighting someone better than 6’1 ½” Takam to get a title shot against Joshua, because that’s not a proper test. Takam is an old guy that was recently knocked out by journeyman Dereck Chisora in the eighth round last year in July. Yeah, Takam was winning the fight at the time, but Chisora is a journeyman level fighter at this point. He hurt Takam with a punch that hit him in the back of the head in round eight. Chisora likes to throw looping shots that often nail his opponents in the back of the head, and that’s what happened with Takam. In Takam’s fight before that, he was knocked out in the 10th round by Joshua in October 2017. In 2016, Joseph Parker beat Takam. It would be nice if Usyk earned the title shot against so that the boxing fans that Joshua-Usyk fight on Sky Box Office aren’t ripped off. If Usyk could prove that he can beat the likes of Alexander Povetkin, Dillian Whyte or Kubrat Pulev, that would mean a lot more than for him to defeat Takam, and then immediately get a shot given him on a silver platter by Joshua’s promoter Eddie Hearn of Matchroom Boxing. 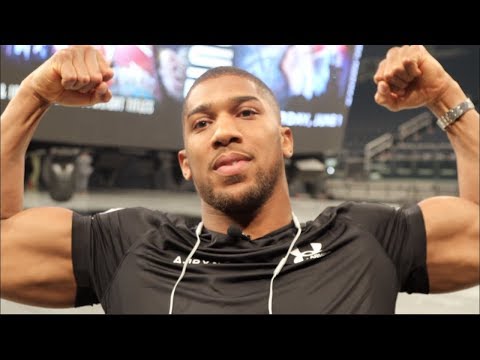 There’s absolutely no reason for Joshua to avoid a small, light hitting heavyweight like Usyk. If Joshua was coming up in weight from cruiserweight, and potentially giving away 30 to 40 lbs against a big super heavyweight, he would likely think twice about taking the fight. In this case, Usyk is the one moving up in weight, and he doesn’t possess Holyfield or even Moorer type heavy hands. He’s a mover, who boxes his way to victories. Usyk has been involved in some competitive fights at cruiserweight where he failed to dominate against Mairis Briedis and Michael Hunter.