Pacquiao vs. Thurman: Will Manny retire if he loses? 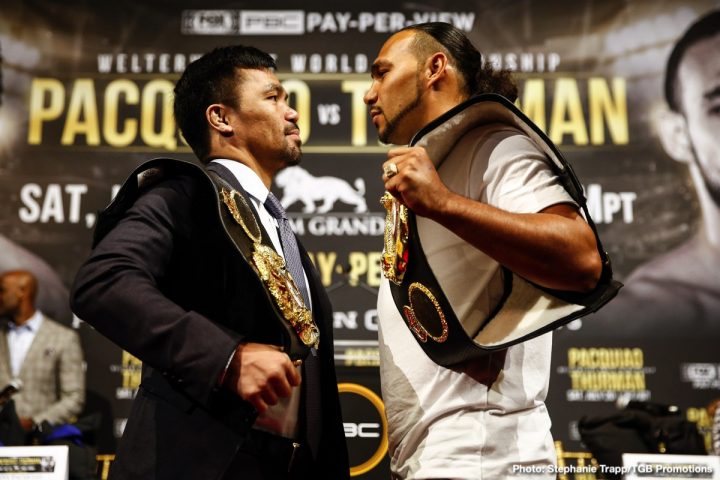 By Mark Eisner: Ring rusty Keith Thurman was full of retirement threats for Manny Pacquiao on Tuesday at their kickoff press conference in New York to hype their July 20 fight on Fox Sports PPV. Thurman says Pacquiao will be “disappear” from the sport after he beats him on July 20.

Thurman is the favorite to win this fight, but he almost lost his last fight against Josesito Lopez last January. Thurman was the favorite for that one as well.

Will Pacquiao retire if he loses to Thurman?

If Pacquiao loses the fight, he’s not expected to retire from the sport. It’ll be difficult for Pacquiao to resist good payday fights he can still make against the likes of Amir Khan, Danny Garcia, Errol Spence Jr., Mikey Garcia, Terence Crawford and Floyd Mayweather. It would have to be a really bad loss for the 40-year-old Pacquiao for him to retire. Thurman might want Pacquiao to retire, because his name on his resume. Thurman could then brag for the remainder if his career that he ‘retired Pacquiao.’ It’s not likely to happen. Pacquiao will remain popular no matter how badly he losses to Thurman. If Pacquiao beats Thurman, then it’s all gravy. His next fight will be even bigger.

During Tuesday’s kickoff news conference, the 30-year-old Thurman was focusing a lot on Pacquiao being older than him, and how he was going to end his career. This is obviously Thurman’s method for bringing in more pay-per-view buys for the fight. On a positive note, at least Thurman isn’t going overboard and talking abut wanting a body on his record like we heard from WBC heavyweight champion Deontay Wilder before his match last Saturday night against mandatory Dominic Breazeale.

Thurman has less mileage on him than Pacquiao, but his body has been breaking down nonetheless with different injuries popping up here there to sideline him. Thurman is technically 10 years younger than the 40-year-old Pacquiao, but his increasingly fragile body makes him roughly the same age. Thurman has only fought once in the last two years due to his body breaking down on him repeatedly with injuries.

“If you understand boxing history, you know that times change,” Thurman said. “I believe boxing is in a new era. Come July 20, Pacquiao will disappear. He’ll always be remembered in the sport, but I’m doing to Manny Pacquiao, what he did to Oscar De La Hoya.”

There’s a slight difference between the level that Pacquiao was fighting at in 2008 when he retired 34-year-old Oscar De La Hoya, and the level that Thurman is at now. He’s not fighting at the same high level that then 29-year-old Pacquiao was fighting at. Thurman is fighting nearer to the level De La Hoya was at in 2008. One Time has lost a lot from his game due to inactivity, injuries and age. Those are the Big Three for fighters. They age, injuries pop up, and then comes the inactivity. It’s a vicious cycle, and ends with a downward spiral that leads to retirement. Thurman appears to be heading in that directly prematurely. Sometimes 30 is the new 40 for some fighters. Thurman seems to be one of those types.

“I’m going to make a big statement. You are not going to want to miss this fight, especially because it’s about to be this man’s last fight,” Thurman said in a gloating manner while shooting stares at Pacquiao during Tuesday’s kickoff news conference. Thurman had a smirk on his face each time he talked of wanting to send Pacquiao into retirement.

It’s difficult to listen to Thurman and believe what he says anymore, because he’s no longer the top fighter in the welterweight division like he was briefly two years ago. Thurman’s injury problems and inactivity are just a couple of reasons why he’s not believable. A lot of boxing fans think Thurman no longer has his head in the game. He’s married, and he’s living the good life with the money he’s made in the sport. What was initially supposed to be a brief amount of time out of the ring for his elbow injury to be repaired in 2017 ended up being two years. Some fans think Thurman could have been back way sooner. All the potential that Thurman had back in 2017, he’s failed to live up to it. His last performance in January against Josesito Lopez showed a fighter that didn’t resemble the guy that he used to be. Thurman looked considerably slower, weaker and not the fighter that he was years ago. Thurman talked at the press conference about him hiring two conditioning coaches to whip him back in shape.

The World Boxing Association has made a mess of their organization by having two champions in many of the divisions. One good thing that can come out of the Pacquiao-Thurman fight is that it will consolidate the two WBA 147-pound champions into just one. Pacquiao currently holds the secondary WBA welterweight title, whereas Thurman has the WBA Super World belt, which is the superior strap.

It might be too early for Thurman to be fighting a guy of Pacquiao’s level. The way that Thurman struggled against Joesito Lopez, he really shouldn’t be taking on a fighter this good at this point. Thurman should be taking baby steps with his career, because he lost too much from his inactivity. Lopez beat Thurman up in their fight last January. One Time won by a 12 round majority decision, but he took more punishment than he had in any of his fights as a pro. If that performance by Thurman is indicative how he’s going to be fighting from this point

“This most likely will be Manny Pacquiao’s last fight,” Thurman said. “He will be here July 20th. But come the 21st, he is gone. You think I’m playing but this ain’t no game,” Thurman said.

Thurman is taking a less respectful approach to downgrading Pacquiao. Instead of Thurman building Pacquiao up, he’s breaking him down, which in turn will minimize the praise he’ll get from boxing fans if he does end up beating him on July 20. Thurman is putting so much emphasis on talking about Pacquiao being part of the past generation, that it’s going to keep the fans from giving him the credit that he’ll want if/when he does beat the former eight division world champion from the Philippines.

“Let’s see who’s tougher in the ring on July 20. This is going to be exciting,” Pacquiao said. “I chose Keith Thurman because he’s undefeated and I want to prove that at the age of 40 I can still beat undefeated fighters.”

It’s thought that the real reason Pacquiao chose Thurman is because he looked so godawful in his “get back” fight against Josesito Lopez on January 26. Pacquiao initially accepted a fight against IBF welterweight champion Errol Spence Jr., who is recognized by boxing fans as the king of the welterweight division today, but then changed his mind and went with Thurman. There’s no other way of looking at that move by Pacquiao other than seeing it as him cherry-picking a weaker champion. Spence would be a pure nightmare for Pacquiao in every sense of the word. At least with Thurman, Pacquiao has a better than average chance of beating him. Heck, Lopez almost did it last January. If Lopez was able to almost beat Thurman, then Pacquiao has an excellent at giving ‘One Time’ his first loss.

Boxing » Keith Thurman » Pacquiao vs. Thurman: Will Manny retire if he loses?