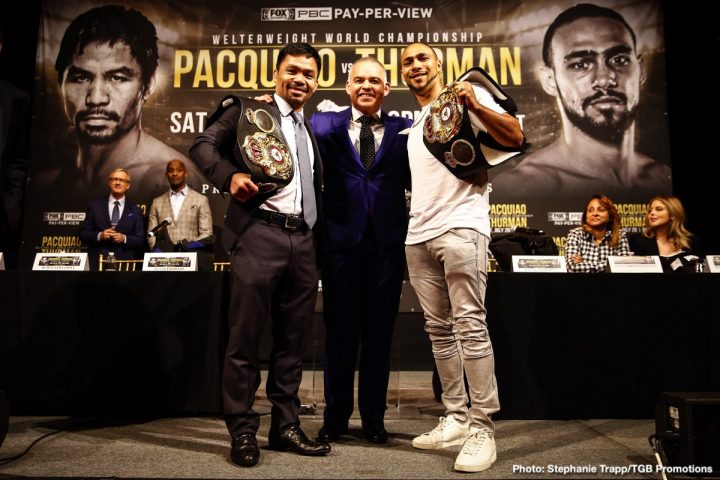 By Allan Fox: Manny Pacquiao and Keith Thurman met earlier today at their New York press conference to talk about their July 20 fight on Fox Sports Pay-Per-View at the MGM Grand Arena in Las Vegas, Nevada.

Pacquiao says he’s going to use speed, footwork and increased punching power to try and get the highly confident WBA Super World welterweight champion Thurman (29-0, 22 KOs) out of their. Pacquiao believes that his 30+ years of experiences will be enough for him to give Thurman his first career loss in this fight. For his part, Thurman was mostly talking about ending Pacquiao’s career and sending him into retirement. Thurman said this young, speed, power and size will be too much for the 40-year-old Pacquiao.

Thurman needs to lose a lot of weight

Thurman might be right about his size being too much for Pacquiao, because when the two stood next to each, Thurman looked like a fighter that was several weight classes bigger. The size difference between the two fighters was more than anything this writer has seen from one of Pacquiao’s fights. None of his opponents have been this heavy looking. Pacquiao took on Antonio Margarito and Miguel Cotto years ago, but those guys weren’t looking like a big middleweight the way Thurman did today. Thurman would have been right at home standing next to middleweights Gennady Golovkin and Saul Canelo Alvarez. If those guys had been on the stage today, Thurman would have looked like one of them That’s bad news for Pacquiao if this is how big Thurman is going to be after he rehydrates on July 20, because he’s too big right now for Manny to have a chance of beating. Thurman needs to lost 25 pounds somewhere for this to be a fair fight.

“I’ve seen his style. I’m not worried about it. I’ve been in boxing for 30 years,” Pacquiao said about Thurman. “My experience helps me a lot. I think he underestimated his last opponent [Josesito Lopez], and got [over] confident. No one can intimidate me.”

The style that Thurman uses is the same one he’s had since he turned pro in 2007. He likes to get off first with his big left hooks and right hands. Thurman mostly throws single shots. He takes advantage of his superior hand speed to land his punches. When his opponents come forward to hit him back, Thurman will retreat. He’ll sometimes stop to hit his opponents with a left hook. It’s always a left hook. He’s predictable. It’s always the left hook. A smart fighter would key off that be ready to nail Thurman with a right hand when he retreats going straight backwards the way he does.

Thurman’s punch resistance is less than most elite level fighters. He does not take punches well. He’s been hurt by the likes of Josesito Lopez, Jesus Soto Karass, Danny Garcia, Diego Chaves and Luis Collazo, to name just a few. Thurman was close to being knocked out by Josesito in the seventh round in his last fight. Thurman blames it on ring rust, but it looked like he didn’t have the chin to take a good shot. The left hook that Josesito hurt Thurman in the seventh round would have hurt him at any point in his career. Ring rust had nothing to do with Thurman being hurt.

“I don’t know. I don’t have any idea. He’s retired,” Pacquiao said about Floyd Mayweather Jr. when asked if he thinks he’ll come back to face him. “I don’t hear [anything]. I don’t think so. He will be scared more.”

Pacquiao has the right idea about not hoping for a fight between him and Mayweather happening, because it’s not going to. The 42-year-old Mayweather has lot too much from his game, and he knows it. Mayweather fought like he was in slow motion in his last exhibition match against the little known Japanese kick-boxer Tenshin Nasukawa on December 31. If Mayweather does come back, it’ll be for more exhibition matches against fighters that have never boxed before. Pacquiao has too much left for Mayweather to fight him again. Pacquiao would easily beat the Mayweather that defeated Nasukawa last December.

“Nothing difficult. I just need to maintain the speed, power, and of course the dedication to the sport and to training,” Pacquiao said. “To prove at age 40 that Manny Pacquiao can still fight. I’m thinking about putting more power for this fight.”

If Pacquiao can put pressure on Thurman the way that Lopez did, he could wear him out. Thurman’s stamina problems didn’t just appear last January for his fight with Josesito. Thurman has had stamina problems for many years. He gassed out against Danny Garcia in March 2017. Thurman can’t blame that on rust. If Pacquiao can tire Thurman out, and stay close to him, he could stop him. Thurman doesn’t fight well on the inside. He needs room to throw his punches, and he hates being crowded.

“I told you that it gives me motivation,” Pacquiao said about Thurman wanting to send him into retirement. “Keith Thurman’s style is really different. It’s similar to Miguel Cotto or like Ricky Hatton, but faster than Ricky Hatton.”

With all the the comments Thurman made during Tuesday’s news conference about wanting to send Pacquiao into retirement on July 20, it’s going to give the Filipino star plenty of ammo to get highly motivated for the fight. Thurman has been talking about wanting to retire Pacquiao even before the fight was made. Thurman seems to see it as an honor for him to be the one that sends Pacquiao retirement. It’s a weird thing, as if Thurman believes it would validate his career. Thurman his misplaced values. What should make Thurman more proud is for him to step up and face Errol Spence Jr., and talk about wanting to send him into retirement. The problem is, Thurman is perceived by boxing public to be running from Spence, so he’s become a name that isn’t mentioned by him. Spence is the third rail for Thurman. He doesn’t dare touch on that subject.

Thurman is going to continue to try and intimidate Pacquiao, because that what he’s used to doing. Thurman is so used to being matched against guys that aren’t as good as him, so he tends to try and scare them. He’s arguably become a bully. The fighters that can potentially beat Thurman, Spence and Terence Crawford, he hasn’t bothered to fight.

“To go after all the other champions,” Pacquiao said about his goal after he beats Thurman. “To get all the belts. There’s a big percentage for a knockout in this fight, either him or me. It’s possible [a fight with Terence Crawford]. It’s a possibility, as long as I’m still in the sport.”

If Pacquiao beats Thurman, it would be nice to see him go after Spence and Crawford in unification fights. Pacquiao was supposed to be fighting Spence now. He agreed to fight Spence last March after Errol’s win over Mikey Garcia in Arlington, Texas. But instead, Pacquiao changed his mind and went after the lesser talent in Thurman. It makes sense, but it looked bad that Pacquiao didn’t do what he was going to do in facing Spence.

“He’s dangerous, but I don’t take him lightly,” Pacquiao said about Thurman. “The key to this fight is hand speed and footwork. [I’m going to] work hard, and make sure I’m in 100 percent condition. That’s the key. Yeah,” Pacquiao said when asked if Freddie Roach will be training with him.”

Thurman can be dangerous if he’s able to land his power shots. Thurman hasn’t knocked out of the good fighters. Thurman hasn’t scored a stoppage since his seventh round retirement of Luis Collazo in 2015. Before that, Thurman hadn’t stopped anyone since his third round knockout win over Julio Diaz in 2014. Thurman’s nickname, ‘One Time,’ obviously needs to be dropped, because it no longer makes sense. It’s like someone with a nickname of “skinny” not making sense after they become really fat. Thurman should tell the media that he doesn’t want to be called ‘One Time’ anymore. Some other nickname would work, but definitely not “One Time”.

“I’m going to be active at the end of the year,” Pacquiao said.

If Pacquiao loses to Thurman on July 20, we may see those two facing each other in a rematch later this year. That will depend on whether Manny uses the rematch clause that he has in the contract. It’ll also depend on Thurman’s health. He tends to get injured a lot during training camp, and during his fights. Thurman might not be able to make it for a rematch with Pacquiao in 2019 if he suffers an injury of some sort during their fight in training camp.

Pacquiao vs. Thurman: Will Manny retire if he loses? »