Pacquiao to get $20M purse for Thurman fight 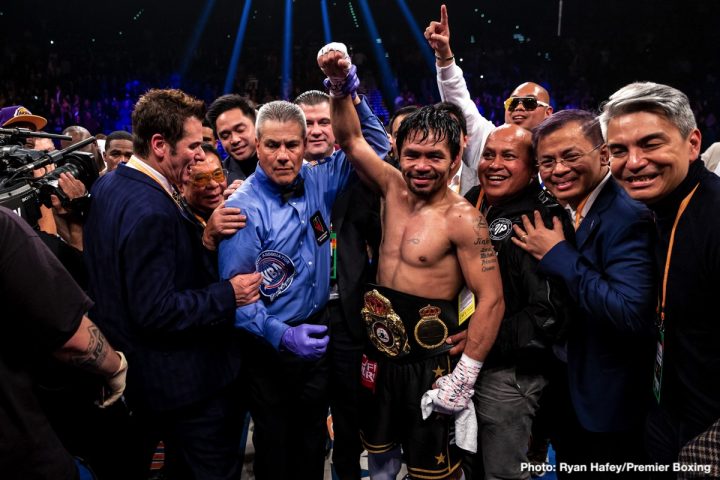 By Sean Jones: Manny “Pac Man” Pacquiao will be getting a big purse of $20 million in challenging unbeaten WBA Super World welterweight champion Keith “One Time” Thurman for his title on July 20 on Fox Sports Pay-Per-View in the main event in their card in Las Vegas, Nevada. It’s unknown how big of a purse Thurman will be getting for the fight. Given that this is Thurman’s first PPV fight during his 12-year pro career, he’ll likely be getting a career high payday.

Hopefully, Thurman (29-0, 22 KOs) doesn’t lose his ambition after he gets his payday like many other fighters in the past after they started making big money. Some boxing fans already believe Thurman has fallen out of love with the sport, and no longer seeing it as a top priority for him. If that’s the case, then he might not make it passed Pacquiao. This is a guy that Thurman will need to be at his best to beat on July 20. If Thurman is thinking about the latest book that he read, or his flute playing, he might come out second best.

At Pacquiao’s age, no one would blame if he chose to cruise through soft opposition for the remainder of his career or until Floyd Mayweather Jr. emerges from retirement for an old timers fight against the Filipino star. Pacquiao chose not to go easy. He wants to still fight the best at 147. Thurman is no longer the #1 fighter at welterweight. Inactivity and injuries have withered away Thurman’s great boxing skills, but hes still one of the best in the division, perhaps below Errol Spence, Terence Crawford, Shawn Porter, and Danny Garcia. Those are the elite guys at welterweight right now. Thurman needs to prove that he still belongs among the elite. His last fight against Josesito Lopez last January showed that Thurman is no longer among the very best.

The 30-year-old Thurman (29-0, 22 KOs) will likely be the favorite in this fight, as he’s much younger than Pacquiao, and he’s been in far fewer wars. Indeed, Thurman has only fought two solid welterweights during his 12-year career in fights against Shawn Porter and Danny Garcia, both of which turned out to be difficult ones for him. Thurman had problems winning fights against contenders Josesito Lopez, Robert Guerrero, Luis Collazo, Diego Chavez, Jesus Soto Karass and Leonard Bundu. Those were all hard fights for Thurman.

Pacquiao comes into his fight with Thurman a highly experienced fighter, having captured eight division world titles in the past. It’s clear that a lot of the division titles that Pacquiao won over the years were against champions that were hand-picked by his management for him to pick up easy titles. But not all of the champions that Pacquiao defeated over the years were ‘paper champions,’ as some boxing fans like to call them. Pacquiao defeated some talented fighters like Miguel Cotto, Tim Bradley, Marco Antonio Barrera, Ricky Hatton, Erik Morales and Antonio Margarito.

Last January, Pacquiao looked good in defeating Adrien Broner by a 12 round unanimous decision in a successful title defense of his WBA World welterweight title in Las Vegas, Nevada After that fight, Pacquiao had his choice of whoever he wanted to fight among the Premier Boxing Champions fighters at 147. Pacquiao could have chose Errol Spence, but he decided on Thurman. This was considered the top dog two years ago before he suffered an injury that kept him out of action for a spell.

Pacquiao is a decade older than the 30-year-old Thurman, but he has more experience and he’s looking better than him in comparing the two in their recent fights. Thurman looked tired after six rounds in his win over Josesito Lopez last January. It’s understandable why Thurman’s stamina would less than it should be with him out of the ring for close to two years. But if Thurman is runs out of gas at the halfway point against Pacquiao on July 20, he’s going to be in for a world of hurt. Pacquiao isn’t going to take it easy on Thurman or fight at half speed. He’s going to go after him and look to take him out. When a fighter shows the kind of stamina issues that Thurman exhibited against Lopez, those problems will show up again and again. Coming events cast their shadows before. Thurman will continue to struggle in the stamina department unless he gets his mind right, and focuses on his cardio. That’s an area that Thurman might have been neglecting in his two years out of his ring.