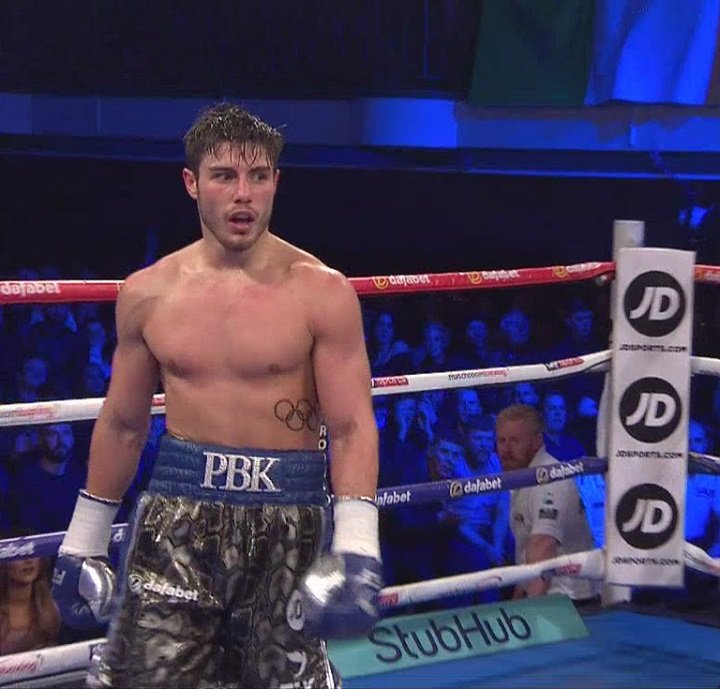 By Charles Brun: Josh Kelly will get a chance to get a chance to show off his talent against Ray Robinson in their 10 round welterweight fight on June 1 on the undercard of Anthony Joshua vs. Andy Ruiz Jr. at Madison Square Garden in New York. The fight card will be show on DAZN in the U.S and on Sky Box Office in the UK.

Kelly (9-0, 6 KOs) be defending his WBA International welterweight strap against Robinson (24-3-1 12 KOs). If Kelly wins this fight, he could be facing EBU 147-pound champion David Avanesyan (24-3-1, 12 KOs) for his title next, Avanesyan will be a good test for Kelly to show the fans that he’s got the goods to take his career to the next level.

Robinson, 33, is a step up from Kelly’s last opponent Przemyslaw Runowski. Kelly had a tougher than expected time in beating the 25-year-old Runowski last month on April 20th at the O2 Arena in London, UK. Kelly out-boxed the Polish fighter Runowski the entire fight, but he kept getting caught with solid shots due to his habit of fighting with his hands down by his waist. Moreover, Kelly was doing too much showboating, and Runowski didn’t like that he was fighting that way against him. It would be a really good idea on Kelly’s part to keep his hands up in front of his head to try and block shots. He tries to fight too much like past greats like Roy Jones Jr., who had blazing hand speed and quick reflexes that enabled him to get out of the way of shots. Kelly isn’t able to do that, because his hand speed is lacking, and his reflexes are nearly good enough for him to get out of the way of shots. Kelly’s punching power isn’t what it should be for him to try and take opponents with single shots the way he’s been doing. Kelly needs to throw combinations, and fight in a more technically sound manner. A lot of boxing fans believe that Kelly should dump his trainer Adam Booth, and find someone that can have him unlearn all the junk fighting that he’s doing now.

Kelly’s constant showing off in front of the crowd worked against him, because it motivated Runowski to not give up. As one-sided as the fight was, Runowski might have lost confidence if Kelly hadn’t tried to make him look bad all night long. Runowski was knocked down in rounds 2 and 10.

“This is a great fight and a huge step-up for Josh on the biggest stage possible,” said Kelly’s promoter Eddie Hearn of Matchroom Boxing. “Robinson clearly won last time out and is an accomplished fighter that will test him in every department. This is the stage for him to shine, in front of a sold out MSG broadcast all over the World – June 1 we will really find out what PBK is all about.”

It’s not a great fight like Hearn says. It’s a decent fight for Kelly, but it’s far from it being a huge fight. Kelly needs to show that he can impress against the better fighters without look silly like he did in his last match against Runowski.

Robinson will have experience advantage over Kelly

Robinson is coming off of a 10 round draw against highly ranked #1 WBO welterweight contender Egidijus Kavaliauskas (21-0-1, 17 KOs) on March 30th in Philadelphia. Robinson fought well enough to deserve a decision win in the fight, but the judges saw it differently. It was an impressive performance from Robinson in holding the hard hitting Kavaliauskas to a draw. Before that fight, Robinson had lost in the past to Yordenis Ugas by a seventh round knockout, Shawn Porter and Brad Solomon. Robinson’s best wins have come against Ray Narh, Terrance Cauthen, Aslanbek Kozaev, and Breidis Prescott. Those are good solid wins for Robinson over B-level fighters.

Kelly’s performance against Robinson will be compared to Ugas’s

Kelly will need to do a better job in beating Robinson than Yordenis Ugas and Shawn Porter for him to come out of the fight looking good. The guys that Kelly has been facing thus far aren’t fighters that the top elite level welterweights in the division have fought. As such, the boxing public hasn’t been able to compare Kelly’s performance against those guys to the elites. Robinson will give people a chance to compare Kelly to Porter and Ugas. If Kelly can’t dominate Robinson like those fighters did, it’s going to make him look bad.

“Robinson is a very good opponent. He’s a good boxer with an awkward southpaw style so it’s another good test for me,” Kelly said. It’s going to be a great fight and a night to enjoy. I get a lot of support from people in the U.S so it’s nice to have an opportunity to put on a performance in front of them.”

As long as the 2016 Olympian Kelly doesn’t fight like he did against Runowski, he might do a good job of winning over some American boxing fans if he beats Robinson. That’s a big if though. Some of the shots that Runowski was hitting Kelly with showed that it’s a matter of time before he gets knocked out in the future. Kelly can’t fight with his hands down by his sides against the better guys, and the fighters with more punching power. If Kelly’s reflexes were better, then it wouldn’t be as much of a problem, but he doesn’t have the cat-like reflexes that are needed for him to fight the way he does.


« Pacquiao to get $20M purse for Thurman fight

Inoue vs. Rodriguez – Rodriguez: “We will shut up some people’s mouths, we are going to make history!” »