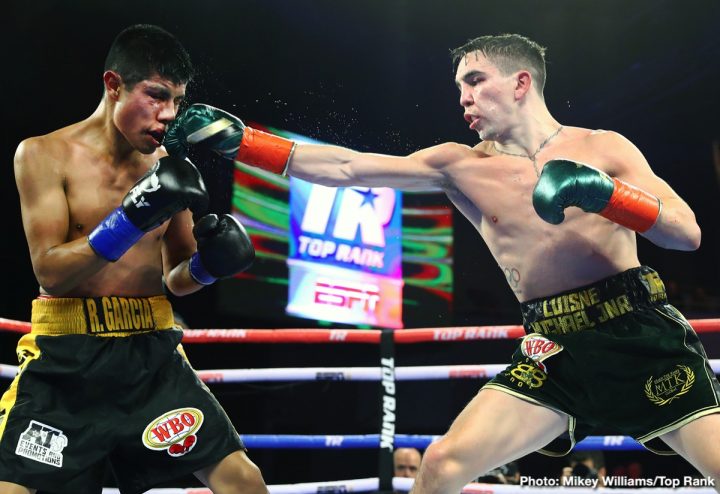 By Tim Royner: Michael Conlan will be facing 2016 Olympic Russian bronze medalist Vladimir Nikitin in a scheduled 10 round bout on April 3 on ESPN+ at Falls Park in Belfast, Northern Ireland, according to Mike Coppinger. This is a rematch of their 2016 Olympic fight in which Nikitin won by a 3-0 score.

That wasn’t the first time the talented Russian fighter defeated Conlan. Nikitin also beat Conlan by a 3-0 score at the 2013 World Amatuer Championship in Almaty, Kazakhstan. Conlan and his boxing fans felt that he was robbed twice in his fights with Nikitin, so this will be his chance to avenge those losses by fighting Nikitin (3-0) at home in Belfast.

It’ll be a pity if Conlan wins a controversial decision. In their two head to head battles in the amateurs, Nikitin showed the better hand speed, and fought better when the two were in close. Conlan fought well when he was on the outside, jabbing and moving, but he couldn’t keep Nikitin off of him. The Russian fighter was able to work his way to the inside and land solid shots that were hard to ignore. The wins by Nikitin over Conlan weren’t robberies It was more of a case of the Russian fighter landing beautiful combinations whenever he got inside on Conlan.

It’ll be interesting to see which of these two fighters are the better pros. Normally one would say it’s early to be matching these two fighters up against each other, but given their long amateur careers and their fairly advanced ages, they might as well fight each other now. Conlan is 27, whereas Nikitin is 29. Those two are both up there in ages for them not to have had a substantial fight as a pro.

As a pro, Conlan doesn’t look all that impressive compared to the other contenders in the featherweight division. He fights with his hands down a lot in the same way that welterweight Josh Kelly does, and he gets hit. The speed and the power Conlan has showed since turning pro isn’t what it needs to be for him to be able to mix it up with the likes of Oscar Valdez, Gary Russell Jr., Josh Warrington, Scott Quigg, Tugstsogt Nyambayar, Carl Frampton and Jessie Magdaleno.

While Conlan and Nikitin were both good amateurs, neither of them were considered the best. There was always better fighters than them. Neither of these guys were going to win the 2016 Olympics. Cuban talent Robeisy Ramirez wound up winning the Gold medal in 2016. He was an unstoppable force, as he was in 2012 as well. Ramirez was like a train, and not going to be slowed up by the likes of Conlan and Nikitin. It’s too bad Ramirez isn’t turning pro. He would be a can’t miss world champion if he turned pro now. Conlan and Nikitin are examples of fighters that were good amateurs, but not great pros.