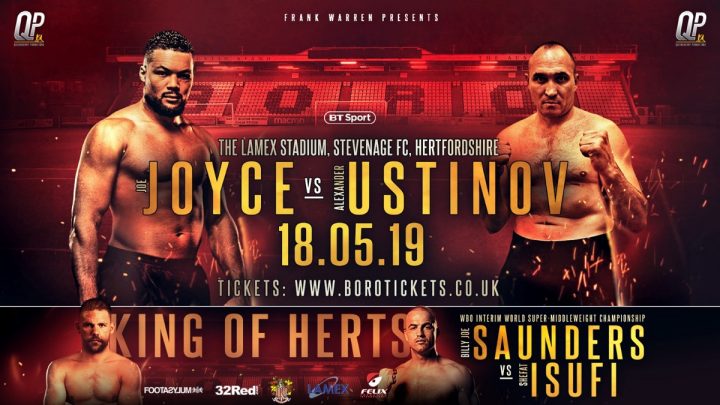 By Trevor McIntyre: Heavyweight Joe Joyce (8-0, 8 KOs) wants to look impressive this Saturday night on May 18 in his fight against 42-year-old Alexander Ustinov (34-3, 25 KOs) on the undercard of the Billy Joe Saunders vs. Shefat Isufi at the Lamex Stadium, in Stevenage, Hertfordshire, United Kingdom.

Joyce, 33, is facing another facing another fading heavyweight from the past. In Joyce’s previous fight, he defeated former WBC champion Bermane Stiverne by a sixth round knockout last February in London, England. Joyce had to walk through some heavy shots from the 40-year-old Stiverne to wear him down and force a stoppage in the sixth round.

After that fight, Joyce realized that he needed to start moving his head more to get out of the way of the hard punches that his opponents are hitting him with. Joyce recently changed trainers in swapping out Abel Sanchez in favor of Adam Booth. Joyce is hoping that Booth can improve his game enough for him to take his career to the next level.

”I got to prepare myself physically and mentally in the gym and it’s difficult, but it’s always like that,” Joe Joyce said to secondsout about how the top heavyweights in the gym don’t want to fight him. ”I never know my opponent until the last minute. It seems that there’s more of a plan going forward here. I’m fighting [Alexander] Ustinov, and Frank and my manager are trying to get an opponent for July. Again, it seems like no one wants to fight me unless it’s like crazy money,” Joyce said.

Joyce was hoping to face 35-year-old former heavyweight world title challenger Dereck Chisora for his July 13 fight at the O2 Arena in London, but the negotiations went nowhere fast. Chisora rumored to have priced himself out by asking for a seven-figure payday to take the fight with Joyce. The 6’6” Joyce isn’t at that level yet where his opponents are able to get “crazy money” in order fight him. That could change in the future if Joyce is able to capture one of the heavyweight world titles. The 2016 Olympic silver medalist Joyce’s July 13 fight will be taking place on the Daniel Dubois vs. Nathan Gorman card.

Joyce is interested in fighting the winner of that fight. Joyce and Dubois had been ordered recently to fight for the vacant British heavyweight title. Instead, Dubois and Gorman will be fighting for that belt Joyce, 33, will likely take on the winner. At Joyce’s age, he can’t bog his career down fighting for domestic level straps like the British title. Joyce should be well beyond fighting for British belts. Try to imagine Lennox Lewis fighting for the British at 33 or Anthony Joshua. Joyce’s career is well behind those fighters due to all the time he spent in the amateur ranks. That’s another reason why it’s important that Joyce not waste a lot of time fighting for trinket titles that won’t his career. Dubois, 21, and the 22-year-old Gorman are fighting for the British title, because they’re both really young. But by the time they’re in their early 30s, they won’t messing about fighting domestic level straps. That’s why it’s important that Joyce focus on fighting at the world level, and leave the domestic level titles to guys like David Price and Dave Allen.

”I’m sure I’ll be in a good fight. I just need to chase down the belts. Ideally, I would have liked to have gone after the European and then the worlds. I know he’s a big, rugged and strong heavyweight,” Joyce said about Ustinov. ”He’s very experienced. I don’t want to be hit by him. I’m going to get my shots off. He seems pretty slow, and he’s 42. I thought I was slow, but I’m going to look good and fast. I look forward to that. I look forward to putting on a good display there as the chief support for Billy Joe. Anyone in the top 10 that’s going to progress me forward,” Joyce said when asked who he wants to face after Ustinov. ”Anyone that’s going to edge me closer to get to the top, that’s the route I want to go. That’s why I was reluctant to fight [Daniel] Dubois for the British title. I kind of want to move forward. I want to get the bigger fights. I would have lost my mandatory status for the European [title] if I’d taken that fight [with Dubois], but I could fight the winner of those two in July,” Joyce said about him wanting to fight the winner of the Dubois vs. Nathan Gorman fight. ”It’s a good domestic dust-up. I’ve seen the weakness in his game that I can capitalize on. He’s still very raw,” Joyce said about the young 22-year-old Dubois. ”No,” Joyce said when asked if he’ll look poor intentionally against Ustinov in order to try and lure the top heavyweights to face him.

It may disappoint Joyce if he fails to get credit for beating Ustinov and Dubois. The boxing public aren’t going to give Joyce kudos for beating Ustinov, because the big 6’7″ Russian heavyweight has lost his last two fights to Michael Hunter and Manuel Charr and looked poor in both fights. The only way Joyce can impress fans by beating Ustinov is if he knocks him out in the first six rounds. Hunter stopped Ustinov in nine rounds last November. Charr dropped Ustinov in the eighth round in beating him by a 12 round unanimous decision to capture the vacant World Boxing Association World heavyweight title on November 24, 2017.

Joyce sees the July 20th clash between domestic level heavyweights David Allen and David Price as a 50-50 affair. He says he’s hoping that Allen (17-4-2, 14 KOs) defeats the 35-year-old Price (24-6, 19 KOs) in their fight on Sky Box Office on the undercard of Dillian Whyte vs. Oscar Rivas at the O2 Arena in London.

”It’s a 50-50 fight. They both have their strengths and their weaknesses,” Joyce about the fight between heavyweights David Price and Dave Allen. ”It’ll be interesting to see who wins this one. I think Dave Allen has got his number. It’s always a strange one with Price. You see him in round three and round four, and you really hope for him to win, and stuff like that, and then you’ll see him get hit with something and act all funny and go down. You’re like, ‘Ah, not again.’ That kind of thing. Dave Allen has been looking good. In his last fight, he landed a body shot [against Lucas ‘Big Daddy’ Browne]. That was a good shot that put Lucas Browne on the canvas like that. So maybe he might put Price down like that. I think he an bang, but he takes a lot of shots, and if Price can get the one-two off on him, he’s got some freakish power in that department. So yeah, it’s another interesting fight, a 50-50 fight, as they say. I’d like to see Dave Allen win this one,” Joyce said.

Price defeated Kash Ali (15-1, 7 KOs) by a fifth round disqualification on March 30 in a fight in which he was bitten. Price, 6’8″, fought well initially, but by the fifth round, he was exhausted and taking punishment against the ropes by Kash. Just when Kash had Price ready to be knocked out, he tackled him to the canvas and bit him on the midsection. The referee stopped the fight and disqualified Kash. Like always, Price’s conditioning looked poor in the fight. Allen will likely be the favorite going into that match.