Keith Thurman in no hurry to face Errol Spence 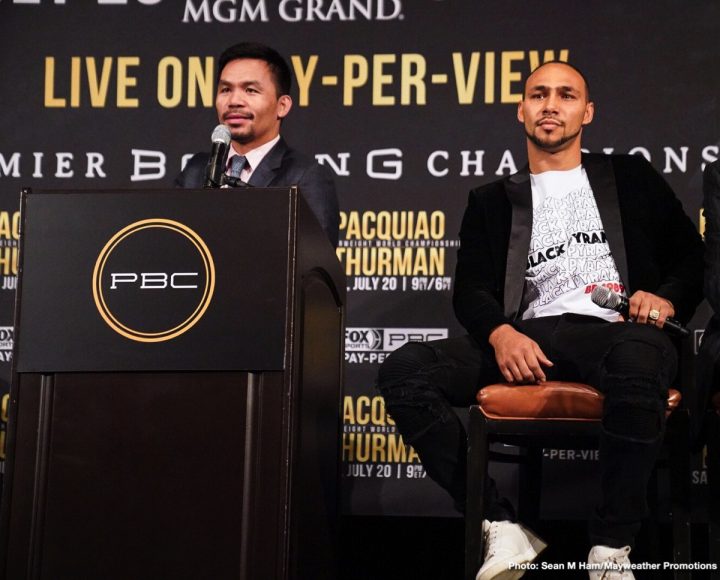 By Mike Smith: Keith ‘One Time’ Thurman got a little testy this week when asked if he plans on looking to face Errol Spence Jr. in a unification fight at welterweight after his July 20th match against Manny Pacquiao at the MGM Grand in Las Vegas, Nevada. Thurman is talking about wanting to make the fight with Spence in the second half of next year in 2020 if everything goes right.

Thurman, 30, has a hard fight potentially in front of him against the 40-year-old Pacquiao (61-7-2, 39 KOs) that he must take care of first before he can move on to bigger fights. If Thurman wins the fight with Pacquiao on July 20th, he says he’ll be done for the year. Thurman says he won’t fight three times in 2019. He already beat 34-year-old Josesito Lopez (36-8, 19 KOs) by a 12 round unanimous decision last January in a tougher than expected fight for him. Pacquiao represents Thurman’s second fight in 2019, and that’ll be it for the year. Thurman fell apart in the seventh round after Lopez nailed him with a left hook that turned his legs into jelly. Although Thurman claimed afterwards that he fought smart, used his head and didn’t panic during that occasion. It looked to some like the only reason Thurman survived is because the round ended before Lopez could finish him.

Thurman (29-0, 22 KOs), who holds the WBA Super World 147-pound title, went in the attack mode of accusing the media of wanting to “rush things” by them wanting him to face IBF welterweight champion Spence Jr. (25-0, 21 KOs) in a unification fight. It was like Deja Vu in watching Thurman get worked up over a simple question of when he’ll fight Spence. We saw the same thing from Thurman four years ago before his fight with Luis Collazo in July 2015, when he was asked during a news conference if he would be willing to fight Spence. At the time, Thurman said three was no point in fighting Spence, because he wasn’t a world champion. Now that the two fighters are both world champions, Thurman still feels there’s “no rush” in him having to fight Spence. Thurman wants the Spence fight to marinate more.

“Everyone wants to rush things,” Thurman said when asked if he’ll look to make the unification fight with Errol Spence Jr. if he beats Pacquiao on July 20. “I still think there’s a little more time. The later leg of 2020, and that’s not too soon and that’s not too late. It’s a great time anytime negotiations can happen. one contract at a time. This is not football. This is not basketball. There’s nothing planned in the season. I’ve never seen in a contract. People talk about ducking this and ducking that. To be ducking, you’ve got to be presented with something and then decline it. Then it’s official. This guy is not trying to fight that guy. So that’s never happened to me in my career. I’ve accepted all the challenges,” Thurman said.

It certainly helps Thurman that he and Spence are both with Al Haymon. If not for that, the might have already been made between the two unless Thurman dug in his heels and steadfastly resisted the idea of facing Spence. The way that Thurman has been putting off the Spence fight for the last four years since 2015, you can’t rule out him turning down the fight no matter who he was managed by. Thurman hasn’t ever shown a great desire to fight Spence for some reason. Thurman’s face changes, and his voice tone does as well when he’s asked by the media when he’ll finally fight Spence. Thurman looks and sounds defensive when Spence’s name comes up. Thurman isn’t as relaxed in talking about Spence as he is when other names like Danny Garcia and Shawn Porter pop up.

Surprisingly, Thurman says Spence still needs to become more popular for the two of them to face each other. Just how much more popular Spence needs to be before Thurman will face him is the important question. It’s important that Thurman make the fight with Spence sooner rather than later, because the way ‘One Time’ looked against Josesito last January, he’s not going to be able to hang on for too much longer before he loses for the first time in his career. It won’t be the end of the world for Thurman if he gets knocked out by one of his opponents. The interest from the boxing public in a fight between him and the undefeated Spence will still be high, but it probably won’t be as high as it would if both guys were still undefeated. Spence is clearly fighting at a higher level right now than Thurman is. Spence isn’t getting rocked by journeyman level opponents the way Thurman was in his recent fight against 34-year-old Josesito last January.

I also think Errol Spence has a little bit more popularity to grow in the sport of boxing. Not amongst you. But that was with Mikey Garcia,” Thurman said when reminded that the Spence vs. Mikey Garcia fight brought in 400,000 buys. “It does matter. It is bigger. But let’s make sure it’s bigger. He’s going to elevate himself if he [Spence] unifies the title [by beating WBC welterweight champion Shawn Porter] that I unified. If he gets the WBC, what did I tell you at the start of the year? I’m not fighting Spence for one title. I’m not fighting Spence for two titles. I’m fighting Spence for how many? Three. Thank you. Keith Thurman vs. Errol Spence is the next Floyd-Pacquiao. It’s the next Oscar-Tito Trinidad. We need to make sure the world knows,” Thurman said.

Spence vs. Thurman still won’t be on the level of Floyd Mayweather Jr. vs. Pacquiao or Oscar De La Hoya vs. Felix Trinidad by 2020. We’re talking about different levels of popularity here. De La Hoya was a super popular fighter during his prime. Thurman and Spence aren’t at the same place. Mayweather and a prime Pacquiao were both bringing in 1 million pay-per-view buys for their fights during their best years. Thurman isn’t a PPV fighter, period. Spence recently fought in his first pay-per-view headliner fight against lightweight Mikey Garcia, and that fight brought in 400,000 buys on Fox Sports PPV. Those are decent numbers, but they’re a long shot from the kind of PPV numbers that Mayweather and Pacquiao used to bring in during their best years. Spence vs. Thurman will likely do good PPV numbers, but it won’t be anywhere near the level of Mayweather-Pacquiao did in 2015. Thurman has been out of boxing for too many years, and he never really fought anyone super talented before he started having injury problems in 2017. Thurman beat Danny Garcia and Shawn Porter. Those are Thurman’s best wins. We’re talking B-level welterweights with those two guys. Garcia and Porter aren’t elite level fighters.

“After I handle this and elevate myself, and he elevates himself, then we fight on another elevated platform,” Thurman said about Spence. “We could have fought two years ago for what? [$]1.6, 1.8 [million]. What does that do and what does that do for the winner? Fighting for one world titles, two world titles, he winner needs to know the winner if the king. You can say Keith Thurman is #1, isn’t #1; I don’t care. I’m an undefeated champion of the world. I’ve been doing this for 23 years. I’m a world class fighter. I can take a punch, I can give a punch. I’m good for the sport of boxing,” Thurman said.

What Thurman fails to understand is if he had fought Spence two or three years ago, his popularity would have increased if he’d beaten him. Thurman would be seen at a different level now. Thurman’s popularity is limited, because his best wins were against Danny Garcia, Luis Collazo, Josesito Lopez, Robert Guerrero and Porter. Those weren’t good enough fighters for Thurman to gain much credibility for beating them. Thurman could have taken his career to the next level if he’d fought Spence and beaten him. Of course, if Thurman lost to Spence, then he’d be at a lesser place than he is now. What it boils down to is whether Thurman believed that he possessed the talent to beat Spence. The fact that Thurman has dodged a fight with Spence for the last four years suggests that he doesn’t think he had the talent to beat him.

“When I wasn’t here, was the sport that great? Even I missed Keith Thurman,” Thurman said. Nothing but time,” Thurman said when asked what he lost from his game in his two years out of the ring. Nothing was really lost. I unified the WBA and WBC by beating previously undefeated Danny Garcia. I was the first to defeat Danny Garcia. I defeated the undefeated Danny Garcia. I unified the titles. I had the injury in that fight. I never complained. I never tried to complain, because I knew I could win the fight. I know at 70%, I can beat 90% of the fighters out there. That’s not being cocky. That’s just understanding the sport. I know how to work. These dudes, even though they know how to work, they sit in front of me and hesitate. That’s why I loved the Shawn Porter fight, because at least he went right at me with the fight. He didn’t hesitate. You best believe on July 20th, when I hit Manny with a reminder, he’s going to hesitate,” Thurman said.