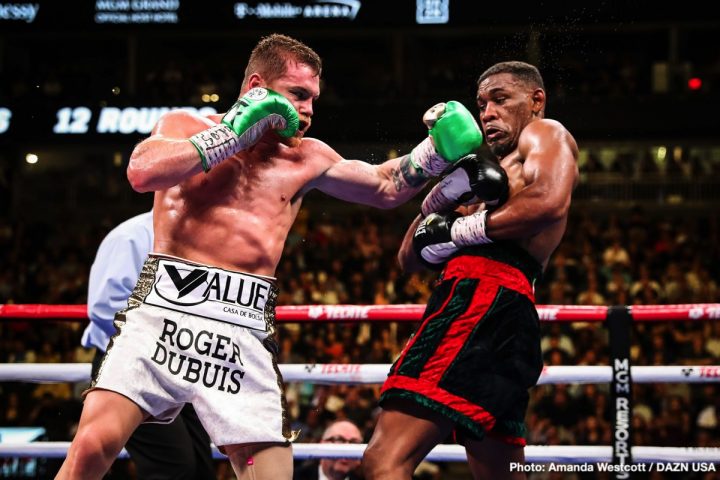 By Dan Ambrose: Gennady Golovkin was surprised at how boring last Saturday’s fight between WBA/WBC middleweight champion Saul Canelo Alvarez and IBF champion Daniel Jacobs was at the T-Mobile Arena in Las Vegas, Nevada. The lackluster performances Canelo and Jacobs both put in last Saturday night won’t win them many fans?

The fight had little action to speak of owing to Jacobs staying on the outside most of the night. When Jacobs did come in close to let his hands go, he did well, but those occasions were few and far in between.

The way that Canelo and Jacobs fought, they both would have lost to the GGG that we saw last September. That version of Golovkin would have beaten Canelo and Jacobs last night. Canelo’s stamina was nowhere, and Jacobs fought like he was afraid of getting caught by one of Canelo’s counters. It was easily the worst performance by Jacobs since his loss to Dmitry Pirog in 2010. You’ve got to give Canelo credit for that, as he made Jacobs afraid to let his hands go after he caught him with some big counter left hooks early in the fight. In round 6, Canelo caught Jacobs with a big left hook that momentarily buckled his knees slightly. That shot definitely hurt Jacobs, but Canelo lacked the reach to try add to that shot. Canelo tried to follow up with another big hook, but he missed by a mile due to his limited 5’8″ height and reach.

With all the hype that there was going into the Canelo vs. Jacobs fight last Saturday, Golovkin thought those two were going to go to war from start to finish. To be sure, GGG wasn’t the only one that thought the fight was going to be an exciting. Virtually the entire boxing world thought Canelo and Jacobs were going to bring it to make an interesting match. What they saw instead was Canelo slowly walking down a reluctant Jacobs, slipping his jabs and power shots, and hitting him occasional with nice shots.

Jacobs was able to connect with a few hard punches each round, but it was nowhere near enough to make the fight interesting to watch. Jacobs fought like he was in the survival mode, and Canelo looked less sharp than he’s been. Canelo’s well defined physique that he sported in his two fights with GGG looked less cut up, like he hadn’t hit the weights as much and worked on the cardio.

One reason for that is Canelo’s bum left knee, which he was wearing a brace on last Saturday. He injured it while training for his fight against Rocky Fielding last December, and the problem hasn’t gone away. Canelo is expected to have his knee looked at by a doctor. If he needs surgery, then could take a while before he returns to the ring. You don’t back from knee surgery in three or four months, and if you try and return that quickly, you could end up struggling like Sergio Martinez did when he tried returning soon after having right knee surgery after his win over Julio Cesar Chavez Jr. in 2012.

“Frankly I was expecting much more. It was just really like a sparring match,” Golovkin said last Saturday night after watching Canelo beat Jacobs by a 12 round unanimous decision at the T-Mobile Arena in Las Vegas, Nevada. “It was a little boring because they are both high level boxers and they should give more to the boxing fans. I didn’t see any emotions, I didn’t see anything special. It was just a good sparring match,” GGG said.

Canelo looked like he wasn’t interested in putting his foot down on the accelerator in the fight. One reason for that might be the fact that Jacobs was doing so little to motivate him. Canelo is the type that will float through a fight if he’s got an opponent that’s there to survive and not try and win. An example of that is the Canelo vs. Julio Cesar Chavez Jr fight in 2017. Chavez Jr. wasn’t trying to win, so Canelo treated the match like a sparring contest instead of looking to knockout out the badly weight drained Chavez Jr. Jacobs may have been weight drained as well, but mostly he fought in the same survival oriented manner that he did in his loss to GGG. And like with that fight, Jacobs complained afterwards that he should have been given the victory. It was the exact same fight from Jacobs. He gave away the first six rounds to Golovkin, and then came storming back to win five of the last six rounds. The judges weren’t going to give Jacobs the win, because he had been knocked down in the fourth round, and blanked in the first half of the fight. It was the exact same thing last Saturday night except Canelo didn’t drop Jacobs.

“The only bad taste I leave with is that Jacobs for the twelve rounds almost fought in like a survival mode,” Canelo’s trainer Eddy Reynoso said. “They didn’t really come to win the fight.”

“That makes it difficult to give the kind of performance and event that you want to see and also makes it difficult for Canelo to perform and do the things he wants to do. But I’m very happy at the same time because we won another title and another belt,” Reynoso said. “We’ve love to unify at 160, but if the [WBO] champion [Demetrius Andrade] isn’t available at the weight, then we’ve like to unify at 168,” said Reynoso.

Going by what Reynoso is saying, it sounds like Canelo won’t be fighting Golovkin next. Canelo can’t fight WBO middleweight champion Demetrius Andrade (27-0, 17 KOs) next, because he’s fighting against his mandatory Maciej Sulecki on June 29th on DAZN. That fight takes place next month. It’s not a big deal for Canelo to put off waiting a little bit longer, but it sounds like he might want to fight three times this year. Andrade might not be able to return to the ring so soon to fight Canelo in September if his match against Sulecki turns out to be a grueling affair. Golovkin is fighting on June 8th, but it’s an easy contest against Steve Rolls. If Canelo wanted to fight Golovkin in September, he could. With Reynoso saying that they want a unification fight at 168 if they can’t fight Andrade next in September, then it looks like Canelo could be facing the likes of IBF super middleweight champion Caleb Plant or the winner of the Billy Joe Saunders vs. Shefat Isufi match. It’s hard to imagine Canelo agreeing to fight Saunders though, because he’s a purely defensive fighter that is hard to hit, and has a tricky fighting style. David Benavidez and WBC champion Anthony Dirrell are expected to be fighting soon. If Golden Boy can work a deal for Canelo to fight Dirrell, then that’s an easy belt for him to win.